Modern racing history is littered with feats of international daring, when horses have travelled halfway round the world to plunder valuable races from under the noses of unhappy, unsuspecting locals. It takes a special kind of trainer to spot the opportunity, work out what needs to be done, and then do it. A few have made a real mark with such exploits, repeatedly helping themselves to prize funds in far-off locations. A few have earned widespread admiration for getting it right in the biggest, most-difficult contests in places and circumstances where the dice are invariably loaded against them.

Although, not one of them stands comparison with Dermot Weld. The Irishman was the first (and second) from the Northern Hemisphere to win the Melbourne Cup and the first (and so far only) European to win a U.S. Triple Crown race. Donn McClean traces what sets him apart.

With the assistance of the Irish Department of Agriculture, overtures to the Department of Agriculture in Canberra were successful, so by the time preparations were being put in place for the 1993 Melbourne Cup, the “internationals” (Vintage Crop was the only one) were permitted to fulfil their quarantine obligations at a racecourse, where they could exercise, as opposed to being cooped up in the quarantine centre in Sydney, where they could not.

But the quarantine situation was not the only problem that had to be resolved before the audacious and unprecedented task could even begin.  On the morning that Vintage Crop was due to leave the country, a fog descended on Ireland and all flights were grounded. Even Dermot Weld could not legislate for the weather.

He remembers walking across his yard at Rosewell House at The Curragh in a philosophical mood. Maybe it was for the best, he thought to himself. Maybe they were right, maybe he was mad, maybe it couldn’t be done. Maybe he couldn’t send a horse to the other side of the globe to win one of the greatest horse races on the international racing calendar. Then his phone rang: The fog had lifted, and he was back on track.

The ground was firm at Flemington when Weld arrived, faster than ideal for Vintage Crop, and the horse was tired after his trans-continental trip. Then, in the days leading up to the race, Michael Smurfit’s gelding started to perk up and began to come to himself. Weld woke up at half past five on the morning of the race to the pitter-patter sound of rain on his hotel window. Liquid gold. The planets aligned and Vintage Crop stormed to an historic and ground-breaking victory under Michael Kinane.

A nation stopped for a few minutes that day all right. Ireland.

It was when Weld worked with Tommy Smith in Australia as a youngster that the Melbourne Cup got under his skin. He used to joke with the locals that European horses were better than Australian horses. Well, no European horse could ever win the Cup, was the usual retort, so the youngster resolved that he would.

Of course, there have been Northern Hemisphere winners of the Melbourne Cup since Vintage Crop. The Japanese had a 1-2 in 2006, Alain de Royer-Dupre won it with Americain in 2010, and Mikel Delzangles won it with Dunaden in 2011. But there have been moonwalkers since Neil Armstrong, and there have been Everest-scalers since Edmund Hillary. Subsequent exploits do nothing to diminish the magnitude of the pioneering achievement.

Indeed, it is probable that the subsequent European successes would not have occurred without Weld’s ground-breaking move, and it is significant that no other European was able to emulate Weld until he went back nine years later and won the race again with Media Puzzle. The trainer was the common denominator.

That is what sets Dermot Weld apart: he is a ground-breaker, a boundary-pusher. He says that it is borne out of necessity, that because racing has become so competitive in Ireland in recent times, you have to look further afield, think outside the box.  He doesn’t have the battalions that, say, Ballydoyle have, he tells you, so you have to think a little more laterally. Pinpoint the horse and the race. Weld is a snipe-shooter with a rifle, a steady hand and a deadly accurate sight.

And, just because he won the Melbourne Cup  on the other side of the world, three years before he won the Irish Derby, which is run a within a strong stone’s throw of his front gate, it doesn’t mean that he neglects things on the home front. On the contrary, Dermot Weld has won all five Irish Classics at least once, as well as just about every top prize on the Irish racing calendar. Also, he is a perennial at the Galway Festival. He has been top trainer there 27 times, and saddled a truly astonishing 17 winners during race week in 2011. 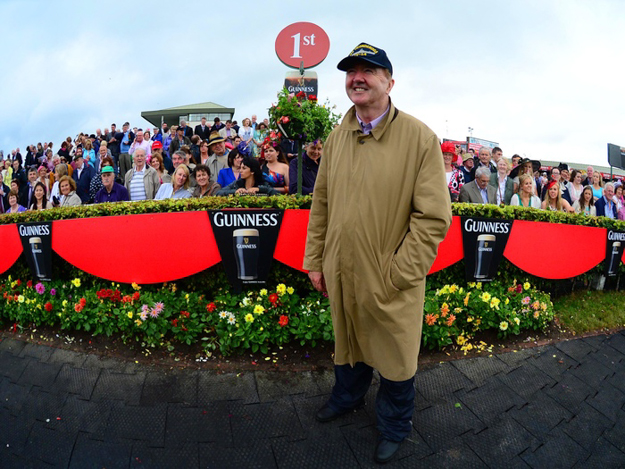 That said, it is his achievements on the global stage that have gained him international recognition. In Britain, he has won the 2000 Guineas, the Ascot Gold Cup, the Golden Jubilee Stakes, the Sun Chariot Stakes, the Epsom Oaks, the St James’s Palace Stakes, the Coronation Stakes, the Cheveley Park Stakes, and the Nunthorpe Stakes. Further afield, he has saddled the winners of the Hong Kong Mile, the Derby Italiano, the Prix de l’Abbaye, the Prix Royal-Oak, the American Derby, the American Oaks, the Secretariat Stakes, and the Flower Bowl International.

When he worked as a young vet on the backstretch at Belmont Park in New York, he dreamed that one day he would bring a horse back there to win the Belmont Stakes, the rock on which several bids to complete the American Triple Crown have perished in recent years.

In 1990, he did, with Go And Go. No European horse had ever won a leg of the American Triple Crown, and none has since. 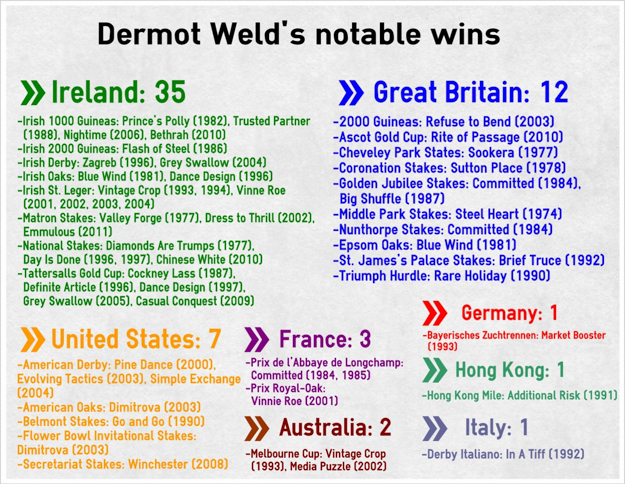