For lovers of racing, little compares to an afternoon (or evening) at the track. The sport is best experienced in the flesh, and the world’s race courses offer diverse ways to enjoy this pursuit. While we can’t literally transport you to the races, we’ll do our best to bring these tracks to you in a regular series of profiles. Today, Hank Wesch's final installment in a three-part look at Del Mar ahead of opening day on July 17.

The phrases “freeway close” and “near the beach” are important advertising enticements for many Southern California businesses, and are both applicable to Del Mar.

The 350-acre Del Mar Fairgrounds facility lies between Pacific Coast Highway (PCH) on the west and Interstate 5 on the east. Giving patrons who drive the option of taking the scenic route on PCH through the beach cities of San Diego County, most notably Del Mar, 20 miles north of San Diego, or taking I-5, one of California’s iconic multi-lane arteries. 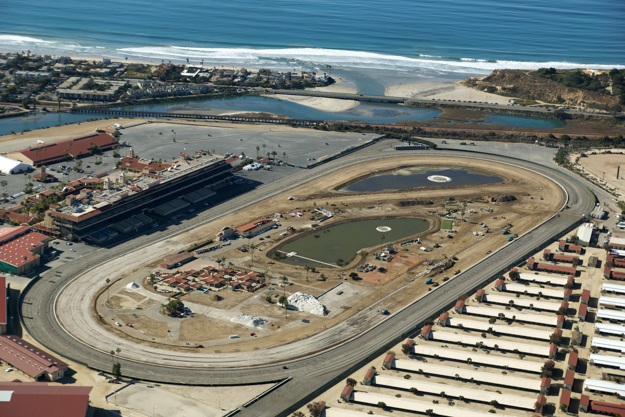 Access can be gained on either route from the north or south. Traffic on either route can be, and often is, headache inducing, particularly on opening day of the summer meeting and Pacific Classic Day. Rather than invite aggravation, the best course of action is to arrive early and use the time to soak in the sun and ambiance. There’s space for 10,000 cars, parking prices range from $10-20.

Those who prefer trains to cars can make the trip from major stations such as Los Angeles and Anaheim to the north and San Diego to the south any racing day, and special cars for racegoers are added on some occasions. Riders are met at the Solana Beach Station and shuttled via London-style double-decker buses to and from the track.

Train travelers have been welcomed at Del Mar since 1947, when the Santa Fe Railroad began service and cheering the arrival of the “Racetrack Special” from Los Angeles became a popular tradition with the locals.

The original wooden grandstand, partly financed as a New Deal, Works Progress Administration project, stood mostly intact for the track’s first half-century, but gave way to progress in 1991. Soon after the last race on closing day of the season ended, while some were still lingering or trudging to the exits, demolition of the existing stands and an $80-million project began.

It was halfway completed in time for the 1992 summer meeting, which was held with the new six-story structure on the west end contrasting the old clubhouse and turf club section. It was fully complete for the 1993 season. It has withstood initial criticism over some sight lines and pillars and has stood the test of time. 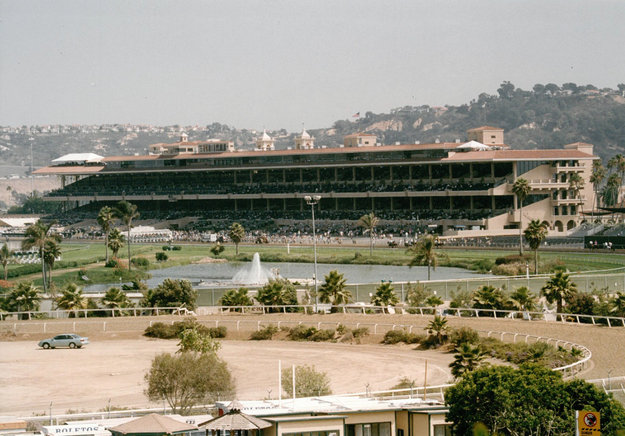 Architects borrowed some ideas from Arlington Park in the Chicago suburbs, giving patrons views of the paddock from one side and the track from the other from vantage points on virtually every floor, but built in a Spanish Colonial style in keeping with Del Mar’s original motif.

The result was seating capacity for more than 14,000, based on 9,000 in the grandstand, about 2,500 in the clubhouse and turf club, and 550 in skyboxes.  All levels provide views of the Del Mar beach and the Pacific Ocean, which Crosby once underestimated as “a drive and a 3-wood” from the closest point on the far turn of the track.

Del Mar Thoroughbred Club CEO and President Joe Harper, the grandson of Hollywood directing legend Cecil B. de Mille, knows about entertainment and entertaining. And throughout his 37-year tenure as the track head, he has emphasized giving quality service and a variety of options, to patrons. 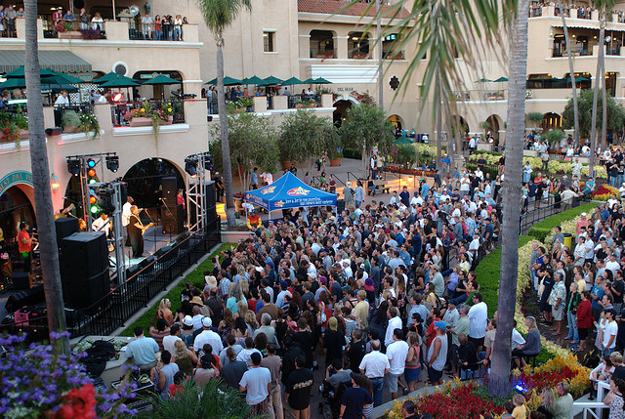 Prices may be cause for pause to some, but haven’t proved a deterrent to many, judging by the attendance and concession figures. And the food, from sit-down dining in the Turf Club and Clubhouse, to the many stands and dining areas, gets consistently good reviews from critics in the local media.

For those of a “when in Rome,” bent, start with a Del Margarita and a fish taco or two from the Rubio’s stand and go from there.

In 1938, the year of the Seabiscuit-Ligaroti match race, the wife of one of Bing Crosby's writers came up with the phrase "Where The Turf Meets The Surf." Crosby and his collaborator Johnny Burke took the inspiration and ran with it, composing lyrics that were set to music by James V. Monaco. The nine-line lead-in verse is campy, but not nearly as catchy as the chorus. And the chorus has provided Del Mar with a musical trademark that has endured through the decades.

"Where the turf meets the surf,

Down at Old Del Mar.

Take a plane, take a train, take a car.

There's a smile on every face,

And a winner in each race,

Where the turf meets the surf at Del Mar."

Crosby sang it live in 1938 and the recording made of it is still played before the first and after the last race each day. And since 2005, there has been a daily "Sing Along With Bing" feature in which someone, professional or amateur, takes the microphone in the winner's circle and sings it to the crowd. The renditions aren't always great, but the song's always a hit.

In the early days, writer Oscar Otis described the feeling of Del Mar as: “More of a mood, a way of life. It’s racing all right, but with this important difference – it’s a great place to relax.” Times have changed greatly, of course, but to many, that sentiment still holds true.

With the exception of a seven-year period in the 1990s, Tom Robbins has been Del Mar’s racing secretary since 1981.  He’s seen the changes.

“Del Mar used to be sort of the weak link in the Southern California circuit,” Robbins said. “Our purses were considerably lower than what Santa Anita and Hollywood offered. This was a great place to vacation.

In 1986, inter-track wagering came into being. Del Mar had access to wagering dollars from the large Los Angeles market. Purses went up and in the last decade the structure has outstripped the Los Angeles tracks. In combination with a “Ship and Win” incentive program to bring horses from outstate both the quantity of horses and quality of racing has held to high levels through the length of the summer meeting.

“It has become a meeting where, in the weeks before and even during, people try and acquire horses, and quality horses, to come and run here,” Robbins said.

Assuredly there have been rough patches throughout the history of Del Mar. Specifically the controversies over the installation of Polytrack in 2007, which had a divisive effect on horsemen and fans alike.

But for the most part, Del Mar has been in a comfort zone of success for much of the last decade. Big and steadily increasing numbers for attendance and handle. Its success is running counter to industry trends.

Now, inevitable change has come and with it are questions. Can the summer meeting continue to be what it has? Can the new November meeting carve any significant niche during a fall season in which football overshadows all?