In the second part of his look back at the impact of the Nazi occupation of France in World War II on the significant British racing community at Chantilly, John Gilmore discovers some key figures who left a lasting mark on the history of the town and the sport.

Read part I: The terrible impact of Nazi Germany on the British racing community at Chantilly

Those French trainers who remained in Chantilly during the war did a great job in maintaining the racing industry under difficult circumstances, keeping things going under occupation and the rationing of horse feed.

The remaining Chantilly trainers through the war benefited from John Cunnington, descended from one of the original British families in the town, having a German wife, Peggy. As a result, Cunnington was able to get more horse feed from the Germans and in that way help the other trainers provide for their horses.

During the war, Chantilly’s racetrack was closed and petrol was restricted, but racing continued under occupation in the Paris region at Longchamp from 1941 until April 4, 1943, when a meeting was interrupted by American bombers targeting the nearby Renault factory at Boulogne Billancourt, killing 54 people at the track. The bodies were removed and the meeting continued, but future meetings were cancelled until July 1945.

Racing at Parisian regional tracks of Maisons-Laffitte and Le Tremblay continued throughout occupation with Bordeaux and Tarbes, the sole provincial tracks open. The Germans were keen on racing, taking a percentage of betting to fund their war needs.

Among those in the Chantilly racing community, many of them British, who played important roles during and after the war were:

Irene Sherwood arrived in Paris with her English parents in 1910 when she was just four years old.

Her interest in racing developed because her father owned four horses trained in Chantilly in the 1920s by Henry Davidson, a cousin of Irene's mother. Irene's family moved to Lamorlaye, near Chantilly in 1937 and she started working for leading French owner-breeder Marcel Boussac as a secretary.

A month before the Germans arrived in Chantilly, Boussac moved his horses to Arcachon in the Gironde region of South West France to avoid them being taken. Irene Sherwood went with them.

Initially arrested in July 1940, she managed to escape and made her way back to Lamorlaye. She was rearrested on Boxing Day 1940 and was sent to an internment camp for women and families at Besancon in eastern France, near the Swiss border. 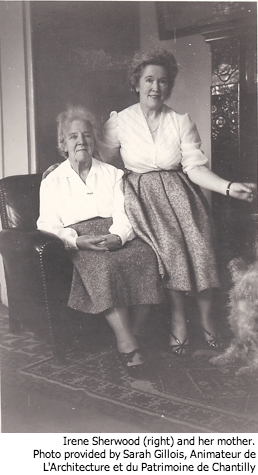 She spent a harsh winter there with temperatures as low as 12 below zero Celsius. Food was scarce and rationed while the barracks were overcrowded. No mail got through. The Red Cross did all they could to help with food and medical aid in difficult circumstances, but conditions were difficult. Internees suffered both physically and mentally from long periods of confinement, and Irene saw women and children perish. There were many suicides.

Six months later, she was sent to another camp in Vittel to the north, where conditions were a lot better. She stayed there until the end of the war.

Irene finally returned to Chantilly in an American army truck in September 1944. Dropped off at the railway station in the dark, she borrowed a bicycle and cycled back to Lamorlaye. She found her brother, Mark, who had also just returned after spending the four years interned at nearby Saint Denis, sitting in the kitchen on a box eating his supper by candlelight. The house had been ransacked. All its contents were gone. But at least they were together.

Irene soon got back into the swing of things, returning to her old job with Boussac until he died in 1980, when she retired at the age of 74. Irene was a secretary in name only. Boussac relied her for the planning of his training operations in Chantilly for more than 100 racehorses, and he admitted she was a significant factor for decades behind the huge success of a racing operation that won countless top races in France and England.

She was responsible for supervising the feed, checking and judging horses’ performances, entering and sending them to the races, work planning of the jockeys, and paying the wages of the stable staff.

Irene was also a much loved - and very generous - member of the local community. In 1994, St. Peter's Church centre in Chantilly was put up next to the church, built in 1865 to serve the large English community. Irene donated €50,000 ($67,000) toward its cost. The Sherwood centre is named in her honour and a large framed photo of Irene Sherwood hangs there. She was no mean painter of racehorses, and a picture she painted of a horse hangs next to her photograph.

Robert Lesaffre, an internationally renowned former Chantilly horse vet, talked just before he died in 2011 at  age 94, about Henry Count and his other war recollections.

"I remember Henry Count in my youth before the war and used to ride out his horses on the gallops when I was a teenager,”  Lesaffre said.

“He used to turn at the racecourse at Chantilly in a Rolls-Royce driven by his chauffeur George,” he continued. “A good friend of my father, he took up the offer of living in my father’s apartment in Paris and hiding from the Germans for the duration of the war. After the war was over, Henry Count came back to Chantilly and just started training again as if nothing had changed.” 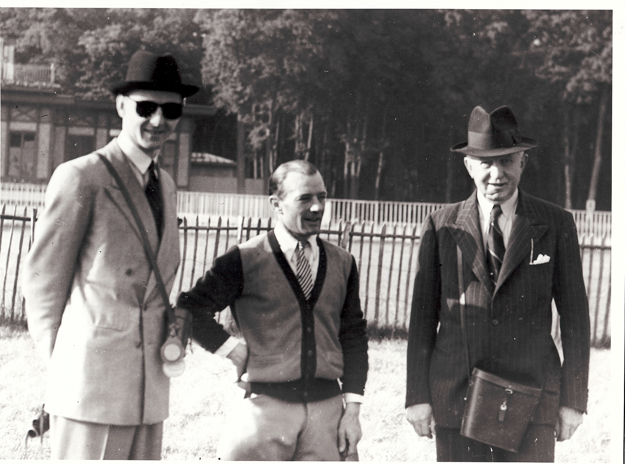 Lesaffre was quite a character himself; at 93, he was large as life, still drove a car, and maintained an active membership in the International Horseracing Veterinary Association

He recalled helping Winston Churchill buy a French racehorse after the war through his son-in-law, Christopher Soames.

"On my advice, he bought a French 3-year-old gelding, Colonist II, in 1949, and he went on to win 13 races in the next two years. Churchill sent me a 24 Havana cigar box every Christmas till he died in 1965 as appreciation,” Lesaffre said.

The most heroic feat during the war at Chantilly has to be that of the Abbé Charpentier (Father Charpentier), who risked his life for his beliefs by giving a memorable sermon on July 25, 1943, at the Eglise Notre Dame in Chantilly.

"As fellow Catholics, refuse the collaboration and totally reject the Nazi ideology policies, solutions and menaces to the liberty of man,” he implored a packed congregation.

After this famous speech, there was an increase in local resistance activity, notably sabotage of trains and railway and telephone lines.

On Jan. 23, 1944, the Gestapo, aided by soldiers and the French police, rounded up 25 local people, including Abbé Charpentier and trainer Charles Bartholomew. They were sent to Royallieu prison camp near Compiegne, just to the north, for interrogation. On Feb. 28, most were released - except Abbé Charpentier, Paul Picot, and Robert Cluzeau. They were sent to Mauthausen concentration camp in Austria.

The Abbé Charpentier is believed to have died in the gas chamber at Hartheim, registered under the number 59728, on Aug. 7, 1944. A sermon in his honour at Chantilly was given in the Eglise Notre Dame on  May 15, 1945.

Trainer William Webb, born in 1877, had his Chantilly stable requisitioned by the French army in September 1939. He eventually fled south and was picked up by the Germans on July 26, 1940, at Nice. He was sent to Saint Denis internment camp north of Paris, where he spent the next four years. He was released by Allied troops in August 1944 after Paris was liberated. Having previously been a leading trainer for 30 years, he was a disappointed and broken man upon release. He found his house, like many others during occupation, had been ransacked. At the age of 67, he didn't have the heart to start training again from scratch despite offers of help from friends. He eventually sold up and went to live in Newmarket, but he never quite felt at home. He died in 1954.

Things worked out a lot better for Geoffrey Lionel Watson, who was born in 1905, and went to Chantilly to become an assistant trainer to Frank Carter from 1925 to 1930. In 1930, he took out his first licence and his owners included Baron Edouard and Guy de Rothschild. He went back to England at the outbreak of war and served in the Royal Army Corps in North Africa.

After the war, he returned to France and picked up where he had left off in 1946, training for the Rothschilds. It was an awkward time. The Rothschilds became embroiled first in a struggle to retrieve their best horses who were taken by the Germans during occupation. After eventually winning a lengthy legal battle, they faced opposition again with their great French rival owner-breeder, Marcel Boussac, who objected to the returned horses being recognised in the French stud book.

However, it didn't affect the Rothschild-Watson racing partnership. They gradually became a major force during the next 25 years. Their record included three Prix de Diane wins and an Arc win in 1963 with Exbury for Guy de Rothschild. In 1972, Watson was the top French trainer with 44 winners. He retired to the south of France, where he died in 1994.

The only pre-World War II British trainer in Chantilly who was interned at Saint Denis and then continued training there after the war was Albert Roberts. Another, Frederic Holt, simply retired with his family in Chantilly after four years’ internment.

Two trainers, William Pratt and John Watts, both returned to England in 1940 and tasted success. Watts won the 1944 wartime 1,000 Guineas with Picture Play, Pratt the 1947 Cesarewitch with Whiteway.

But World War II was certainly the end of an era for the British racing community that began in the 1830s. Chantilly’s development and construction would not have been possible without the dedication of those racing pioneers from the 19th century and their descendants.

In the past 40 years, the numbers of British residents in Chantilly has been steadily climbing once again, and some 350 families now live in the area. Nowadays, the breadwinners work mainly in business at nearby Roissy Airport or in Paris, although increasing numbers of youngsters from Britain and Ireland have moved to Chantilly to work as stable staff - wages are higher in France than at home - and a new crop of British trainers -  Rupert Pritchard Gordon, John Hammond, and Jonathan Pease - continue the historic tradition.