Margaret Thatcher, the former British prime minister, once suggested that “A statistic should tell a story.” In Thoroughbred racing, the statistic known as a fatality rate is an amalgam of many different stories, but what kind of story can be told by fatality rates themselves?

The books are now closed on two of North America’s marquee Thoroughbred racing meets — Del Mar and Saratoga — and both meets unfortunately saw equine fatalities reach double digits during their short stands. Deaths occurred during both morning training and afternoon racing, with causes ranging from catastrophic fractures to sudden cardiovascular events to freak accidents. The cluster of incidents provides an opportune moment to step back and look anew at fatalities at our Thoroughbred racetracks. Is the situation improving or worsening? Where are we going — and where have we been?

In 2008, The Jockey Club launched the Equine Injury Database (EID) to monitor racing fatalities and attempt to discover data-driven risk factors. In its short existence, the EID has produced overall yearly racing fatality rates (by convention expressed as per 1,000 starts) at or near 1.90 with little variation. As we are often reminded, this fatality rate is at least twice that of several other prominent racing countries.

But there is a different database that can take us back in racing time a good deal further than the EID. In 1990, the California Horse Racing Board (CHRB) initiated the Postmortem Examination Program. In partnership with the California Animal Health and Food Safety Laboratory System (CAHFS), the Postmortem Examination Program requires that a necropsy be performed on every horse that dies for any reason at a facility under the jurisdiction of the CHRB. By doing so, the program aims to better understand and ultimately help prevent injuries to racehorses of all types in California.

In due course, this visionary Postmortem Examination Program has produced something else of great value — a meticulously collected census of racehorse fatalities since 1990. The CHRB releases summary statistics on the Postmortem Examination Program in its annual reports. These reports are available on the CHRB website dating back to the 1994-95 fiscal year. Compiling and analyzing this information can give us a sense for how the incidence of Thoroughbred fatalities has changed during a 19-year period at California racetracks. Admittedly, we have no basis to project any observed trends to the national level. But as a case study —and as the only database of its kind in existence — the results can still be informative.

Though this necropsy program includes data on all types of equine deaths including those stemming from equine diseases and off-track injuries, we will focus on only those fatalities having occurred during racing or training. Additionally, we will restrict this case study to five racetracks — Bay Meadows Racecourse (BM), Del Mar Racetrack (DMR), Golden Gate Fields (GG), Hollywood Park (HOL), and Santa Anita Park (SA) — thereby excluding Los Alamitos and the California fair circuit. The CHRB annual reports are not quite detailed enough to confidently isolate Thoroughbred-specific information at Los Alamitos and the fair circuit. Bay Meadows ceased operations in 2008 and Hollywood Park ceased operations in 2013.

This chart presents the time series of fatalities for our case study. 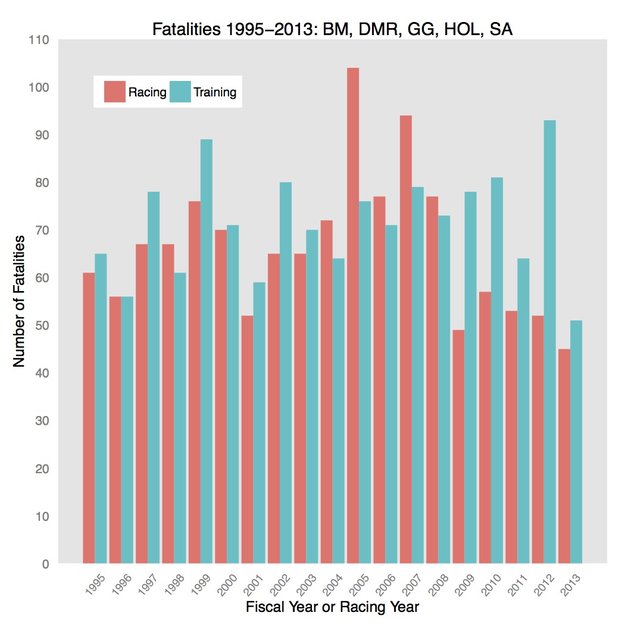 The most surprising reality for most readers viewing this chart is likely to be the sheer volume of fatalities during training. Training fatalities exceeded racing fatalities for our five-racetrack case study in 12 out of 19 years and for each of the most recent five years. With no truly comparable database available anywhere else in the U.S., it’s difficult to know if the volume of training fatalities depicted is typical or a California-centric phenomenon.

However, we can draw some comparison with racing in New York by looking at the Equine Breakdown, Death, Injury and Incident Database launched in 2009 and maintained by the New York State Gaming Commission. 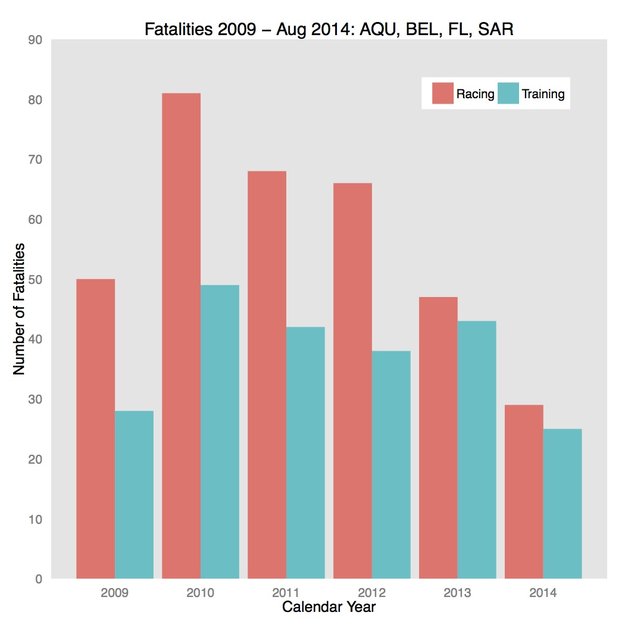 While noting a welcome trend towards fewer racing fatalities in New York, we can see that training fatalities represent a (potentially) growing concern here, too. Although the California case study chart presents a more extreme example, New York is trending that way. It must be noted that the period of data collection in New York is much shorter (and only partial-year data was collected in 2009), which limits our ability to draw conclusions from the analysis in the same we can from the decades of information available in California. It is not that unreasonable to suspect that fatality data charts from other racing states may tend to show similar results.

Perhaps as a product of an industry-wide movement toward transparency, we are just beginning to see training fatalities receive the attention that racing fatalities do. Steve Koch, vice-president of Thoroughbred racing at Woodbine, a racetrack associated with exceptionally low racing fatality rates, offered up some pointed comments on this topic at the Welfare and Safety of the Racehorse Summit in July of this year. It is fair to assume we will hear more of the same from him and others in the future.

Taking a bird’s-eye view of our California case study time series, it’s easy to see the rocky road that ushered in a CHRB mandate for synthetic racing surfaces in 2006. It’s equally easy to see that the raw number of racing fatalities have decreased and leveled off since that time. In fact, the most recent reporting period, the 2012-13 fiscal year, witnessed the lowest number of both racing fatalities and training fatalities in our study.

Of course, it’s a bit more complicated than that.

While a trend toward fewer fatalities is encouraging news, it does not tell the whole story. Compared to earlier years in our California study, today there are fewer racetracks, fewer racing days, and, on average, fewer horses competing in any given race. After all, the surest way to reduce the number of fatalities is to simply have less racing.

The most precise method to adjust for a decreasing volume of racing and to make it sensible to compare raw numbers of fatalities over time is to introduce the number of Thoroughbred starts corresponding to each time period. Starts in our case study dropped precipitously (-28.3 percent) during the 19-year period, from 33,785 in the 1994-95 fiscal year to 24,235 in the 2012-13 fiscal year. With the number of starts now available, calculating racing fatality rates is straightforward.

The question of how to properly track training fatalities as a sensible metric remains tricky. It’s not entirely intuitive or particularly elegant to simply lump them in with racing fatalities and recalculate the fatality rate. But, with a nod to 14th-century logician William of Ockham and his principle of parsimony, that’s precisely what we’ll do next. Let’s call this statistic the “total fatality rate.”

Has the story changed yet again? Not appreciably so. The total fatality rate of 3.96 for the 2012-13 fiscal year can be considered low and trending in the right direction, but there are lower rates throughout the 1990s. Golden Gate continues to produce low fatality rates of late compared with its more famous neighboring racetracks (perhaps it’s time to revisit the popular narrative that says “blue-collar” racetracks are less safe).

Our challenge then, should we dare to accept it, is to decide whether declining fatality rates in California represent signal or noise. This year’s beleaguered Del Mar meet could give us pause, and the impending Del Mar surface switch from synthetic to dirt might make us nervous.

Still, there are reasons to believe it is signal. The simple fact that this article could be written using available fatality data is evidence in itself that a new and different era in Thoroughbred racing has dawned. When one stops to consider all the welfare and safety initiatives conceived in just the last several years -- from the NTRA Safety and Integrity Alliance to Dr. Mick Peterson’s Racing Surfaces Testing Laboratory at the University of Maine -- the direction of progress is clear. And safer racing is certainly not due to any one initiative, but rather the collective weight of them all.

“If we can accomplish that, we will have done an awful lot. But we have to accomplish it in the right way. And if we don’t do it in a way for the horses and whoever’s on their back, then we’re not doing the right thing for racing.”

As the culture of Thoroughbred racing changes – reacting to pressure from within and without - safety has become an ever more important part of the narrative. Is it realistic to set a fatality rate target for Thoroughbred racing in California and beyond? Why not 1.00? Why not a total fatality rate target of 1.50? To paraphrase the words of Henry David Thoreau, “In the long run you hit only what you aim at.”

With gratitude to the California Horse Racing Board, The Jockey Club, and the New York State Gaming Commission for making Thoroughbred fatality data available for further analysis, and Equibase for providing data on starts. These organizations bear no responsibility for the analyses or interpretations of the data presented here. Thoroughbred Racing Commentary bears no responsibility for inaccuracies contained in the original data sets.

Dan Needham is the principal and founder of Thorotrends, LLC, a research and analytics firm founded upon the premise that the Thoroughbred racing industry must become both customer-centric and research-driven in order to recapture lost market share, interest, and awareness.