This article originally appeared on Racing And Sports.

And as we will see, the knock on effects for the soon-to-be-turning 4-year-olds, is sure to spark an interesting debate.

Their age group won 11 G1 races against older opponents during the season, the most prolific being All Too Hard who won three races (All Aged Stakes, Futurity Stakes, and Orr Stakes) while Pierro won two (Canterbury Stakes/George Ryder Stakes).

In the last 20 years, only one 3-year-old crop has won more group one races against older horses in the season, and that was the 1997-98 crop, headed by General Nediym (126) — that group winning a staggering 12 races.

At the other end of the spectrum we have crops such as 2008-09, that before this year was the lowest producer of group one races against older horses — three in total, Nicconi (Galaxy), Duporth (Doomben 10,000), and Typhoon Tracy (Coolmore Classic).

The table below shows, amongst other statistics, the number of wins each group has recorded each season in the last 20 years against older horses — at the elite level.

As a matter of interest, during the last 20 years, the average number of G1 wins recorded against older opponents by the 3-year-old crop, each season, is 7.5.

But using the number of wins by a 3-year-old crop against older horses in G1 company on a seasonal basis is just one Key Performance Indicator (KPI), so let’s explore some others based around Timeform ratings for each season.

If we look at the number of 3-year-olds Timeform rated 120 and above for each crop, it is quickly obvious that this season’s crop is below average with just nine fitting that category, against a 10 year rolling average of 10.2 runners.

On the first measure, the median Timeform rating for three of the four substandard crops, including this season, was identical and equal to the lowest crop median for the last 20 years, while the other year 2010-11, was a pound higher.

An examination of the median value of the Timeform rated horses 115 and above in each crop and also confirmed the result, all four profiling as equal lowest in the last 20 years.

So, not only does this crop rank equal lowest for the number of G1 wins against older rivals in the last 20 years this season, but is also similarly placed when looking at the number of Timeform rated runners 125 and above as well — as based on the median rating for the top runners of each crop.

Given we have one of the lowest rating 3-year-old crops on record in the last 20 years what does this mean for these rising 4-year-olds?

The table below also summarises the record of each 3-year-old crop as 4-year-olds, so there is an historical footprint that can be analysed to predict just how they might measure up at age 4. 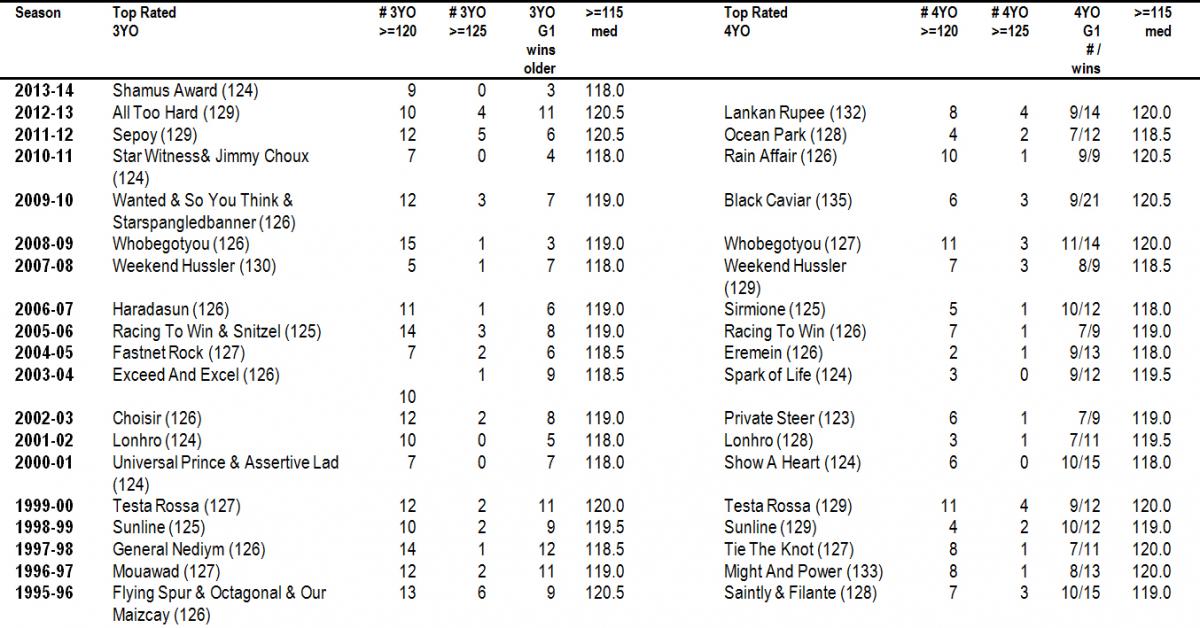 And the evidence suggests it may not be all that dire.

Focussing first on the only previous crop to win just three G1 races against older horses in the season — the 2008-09 year — we observe a number of positive facts for the crop at age 4.

Whobegotyou was the top Timeform rated 3-year-old on 126 and he held that position at four, increasing his Timeform rating slightly to 127. However the crop as a whole, as might be expected, seemed more mature at 4 with 11 individual horses winning a total of 14 G1 races.

The next lesson to be learnt from the 2008-09 crop is the general increase in the median Timeform rating for those runners Timeform rated 115 and above, rising from 119 at age 3 to 120 at 4.

As well, there was an accompanying slight increase from one to three in the number of horses rated 125 and above, which was tempered to a degree by a small drop off in the number of runners Timeform rated 120 and above, down from 15 at age 3 to 11 at 4.

Second, if we switch our attention to the other three crops that had zero runners Timeform rated 125 or above as the KPI, we again highlight some positive signs for the group at 4.

This is indeed a very significant finding and based on the empirical evidence we could expect the current crop to win around seven or eight G1 races next season.

No doubt Australian racing has been fortunate in the previous two seasons to have experienced two of the better 3-year-old crops in the last 20 years especially the 2012-13 year, so it is not entirely unexpected that we must have inferior seasons as well.

But as our analysis shows, even if the crop is inferior at 3, they can generally catch up at 4.

It will be interesting to follow the progress of the current crop in 2014-15.

But there is another twist for this crop because the top end, unlike other low rating years, has been essentially decimated through the retirement to stud of champion Timeform rated 3-year-old Shamus Award (124), Polanski (123) to injury, Long John (122) racing overseas, Zoustar (122) to stud, and maybe Complacent (122) to injury.

Under this scenario one might predict they will face a significant task to perform up to the empirical and quantitative expectations outlined during this analysis.