With the Dubai World Cup just behind us and the Kentucky Derby preps hitting their busiest time, one name features strongly in the pedigrees of many of the leading contenders - A.P. Indy. He does so because he is one of the most potent sources of stamina among dirt/artificial surface runners in North America, and because he is fast establishing one of the most important sire lines in his native country.

The last two U.S. male classic years illustrate the sort of influence he now has. The 2013 Kentucky Derby winner Orb is by Malibu Moon, a son of A.P. Indy. The 2014 Kentucky Derby and Preakness winner, California Chrome, is by Lucky Pulpit, a son of the A.P. Indy sire Pulpit. And 2014 Belmont winner Tonalist, is by Tapit, another son of Pulpit.

California Chrome, of course, ran with plenty of distinction - and not much luck - in the Dubai World Cup, and there is no shortage of prominent candidates among descendants of A.P. Indy for the upcoming U.S. classics.

Florida Derby second Upstart, winner of the Holy Bull Stakes and demoted from first in the Fountain of Youth, is by A.P. Indy's son Flatter. Louisiana Derby runner-up Stanford is by Malibu Moon, by A.P. Indy, and the third, War Story, is out of a mare by Pulpit.

In the G1 Ashland Stakes on Saturday, one of the major candidates is 2014 G1 Chandelier Stakes winner Angela Renee (by Bernardini, by A.P. Indy), and the seven runners also feature 2014 G2 Golden Rod Stakes winner West Coast Belle (by Tapit).

In the G1 Santa Anita Oaks, the eight runners include G1 Las Virgenes second Light The City (out of an A.P. Indy mare), minor stakes winner Glory (by Tapit) and recent G3 Santa Ysabel winner Stellar Wind (out of a mare by Malibu Moon, by A.P. Indy).

Promising 3-year-olds Far From Over (winner of the Withers Stakes) and Khozan (both now injured) are both out of A.P. Indy mares, and last year’s G1 Hopeful Stakes winner Competitive Edge, who made an impressive return at Gulfstream Park last week, was sired by 2010 Kentucky Derby winner Super Saver, who also is out of an A.P. Indy mare.

This is the first year A.P. Indy himself has no classic candidates. His last foals were born in 2011, and he continues to live in retirement at Lane's End Farm in Kentucky. 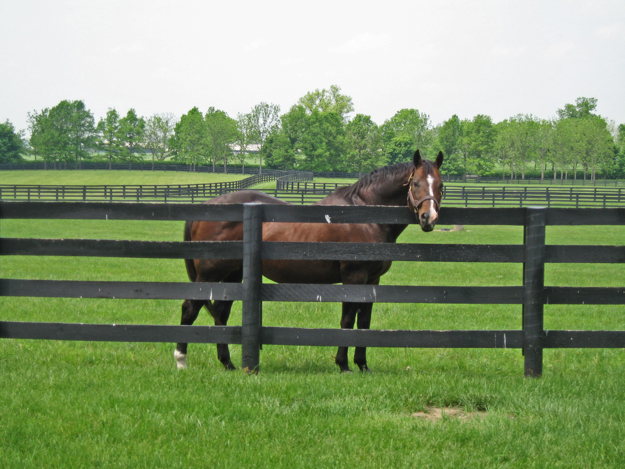 A.P. Indy was always highly regarded. He was the most expensive yearling of 1990, drawing a bid of $2.9 million at the Keeneland July Sale. That price was influenced by his strong good looks but also his near relatives, for half-brother Summer Squall was recent winner of the Preakness Stakes.

A.P. Indy's chief wins came in the Belmont Stakes and Breeders' Cup Classic before he was retired to stud.

The statistics state that from approximately 1,220 foals he has sired around 150 stakes winners. His progeny generally followed his own mould - not precocious but capable of showing good form in the autumn of their juvenile season, better at 3 in excess of a mile, with some relishing at least 10 furlongs.

He sired just two U.S. classic winners - Bernardini (2006 Preakness Stakes) and filly Rags To Riches (2007 Belmont). That belittles his influence, for he was leading North American sire in both 2003 and 2006. He did well with horses who developed well after the classics, such as Aptitude and Mineshaft, and also had a few classic contenders who had their careers cut short, such as Pulpit.

Stallions equal or superior of A.P. Indy have seen their influence dwindle. A.P. Indy has seen his grow rapidly because of his ability to get a large number of good sire sons - and grandsons - even out of runners who were not top class or whose racing careers were short lived.

There are clues earlier in this piece; an inexhaustive list of those stallions includes Aptitude, Bernardini, the brothers Congrats and Flatter, Jump Start, Majestic Warrior, Malibu Moon, Mineshaft, Pulpit, and Stephen Got Even, all sires of G1 winners and most still active.

Crucially, Pulpit himself has turned into a major sire of sires. His sons include Essence Of Dubai, California Chrome's sire Lucky Pulpit, Sky Mesa, and the ill-fated Sightseeing - all sires of top-level winners in the U.S. - plus Tapit, who at $300,000 has the highest 2015 fee of all North American stallions.

Tapit gained his most important wins in the G3 Laurel Futurity and G1 Wood Memorial for Michael Dickinson but managed only ninth behind Smarty Jones in the 2004 Kentucky Derby.

At Gainesway, he made a rapid start; his first crop included Stardom Bound, whose five straight G1 wins included the 2008 Breeders' Cup Juvenile Fillies, and fellow juvenile G1-winning filly Laragh. That pace did not slacken, to the point that Tapit was leading sire in North America by earnings in 2014 following three years in the top five.

He currently has 37 Group/Graded winners, 16 of them at G1. It's worth bearing in mind that the quality of his mare books will have risen steeply since his first runners appeared, and even since the likes of Tonalist and Untapable were foaled.

Why has A.P. Indy been so influential?

Apart from his toughness and good looks, he has a superb pedigree - with, by U.S. standards, a large dose of stamina - featuring several successful stallions.

He, plus the aforementioned Summer Squall, have both had a large collection of G1 winners; the latter in particular is sire of 1999 Kentucky Derby and Preakness winner Charismatic and  broodmare sire of 2009 Belmont winner Summer Bird.

Another stallion in the family is French G1 winner Gay Mecene, who overall was disappointing but did become broodmare sire of far more successful Anabaa.

A.P. Indy's influence, however, is minimal in Europe. He has had stakes winners, including Admiral's Cruise and Mingun at G3 level, but his imports generally have fallen short of expectations.

Tapit has a couple of stakes-placed performers in France, and his North American success will ensure more of his progeny appear in Europe.

That is of little consequence in North America, which is geared for what could be another outstanding year for descendants of A.P. Indy.