In the second part of look at the current strength of the mighty Irish breeding and racing operation going into the new flat season, racing analyst James Willoughby studies the impact that Aidan O’Brien has not only on the fabulous team of Thoroughbred bluebloods under his care, but also on the sport in general.

I was going to start this analysis of Coolmore Stud’s trainer Aidan O’Brien using a similar method as the one used to assess the true talent of a successful jockey like Ryan Moore. How do we reach an objective answer to the following questions: Is Aidan O’Brien really a brilliant trainer who upgrades the raw talent he receives? Or could many trainers achieve the same? Has he made the reputation of horses such as Galileo, or have they made his?

Then, I prepared the data and just completely gave up. I mean, what can you say? It isn’t just his collated flat results in Britain and Ireland: 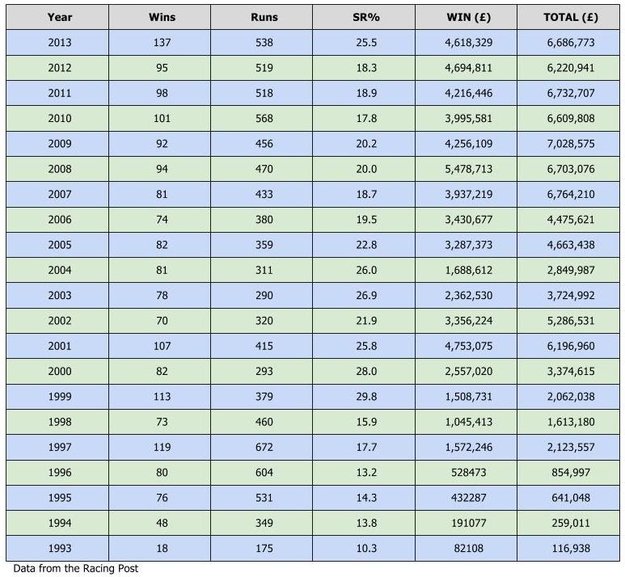 It is more that nobody is really in a similar position, either in terms of the advantages in terms of stock, or the pressure of turning the raw material into results. But, even if some other trainer could be compared with him, it wouldn’t be fair.

Take Godolphin’s main trainer Saeed bin Suroor, who once represented an approximation of an adversary for O’Brien. Top-class flat racing in Britain and Ireland was once cast by the media as a battle of the superpowers Coolmore/Ballydoyle and Godolphin/Darley, those racing and breeding empires headed by John Magnier and Sheikh Mohammed in two shades of blue. They once constituted a kind of racing cold war.

What happened to that narrative? It’s gone, finished, settled forever, it seems, as long as O’Brien is in charge. It’s not like it’s always been plain sailing since 1993, with a notable weakness being the trainer’s occasional failure to meet the different challenges of racing on dirt (notwithstanding Johannesburg’s 2001 Breeders’ Cup Juvenile win) and in Australia. But he’s won 20 British Classics, 29 Irish Classics, and eight Breeders’ Cup races among more than 200 international Group/Grade 1 races in total. You can see why I didn’t pursue the original inquiry referred to in the introduction: Only one conclusion is credible, even if there ever was evidence to bring it into doubt.

When I outlined the first, most basic steps in properly assessing riders in the Ryan Moore article, the method was intuitive: The results of different riders cannot be compared until we discount the advantages of horsepower.

Unfortunately, it’s a far less tractable problem with trainers. A jockey plays a relatively minor influence on a horse’s physical talent outside the bounds of a race; different riders with the chance to ride the same horse on a given day are equally well disposed to achieve success. So, if a jockey rides a large sample of good-quality horses and achieves modest results, we can be fairly sure he isn’t very effective.

But a trainer plays a vital role in the production of the baseline ability with which we judge the likelihood of success when a horse goes to post. While a trainer with a high strike-rate is likely to be a more effective practitioner than one with a poor strike-rate, we simply can’t be sure whether two trainers with a similar strike-rate are overachieving with moderate-quality stock or underachieving with good-quality runners. Sure, we could construct a metric that takes into account something like the median price of a trainer’s sales-bought stock, or their production costs in the case of owner-bred horses, but the whole exercise pretty soon becomes too messy from a mathematical perspective.

O’Brien starts with horses who are extremely well-bred and, mostly, very good-looking. Plenty fall by the wayside, as might be expected, but a consistent feature is that the best horses are usually identified at a very early stage by the trainer; the presupposed “pecking order” of Classic aspirants very often stays the same.

In 2014, there is one horse seemingly out on his own at the top of that pecking order - Australia. The son of – you guessed it – Galileo and the super mare Ouija Board, this colt is unbeaten in three starts and currently heads the betting for both the 2,000 Guineas and Derby.

This is the classic O’Brien wunderkind. When you watch him on tape – or witness a recent racecourse gallop at The Curragh, in which stablemate Johann Strauss went much better than him – it seems most unlikely he could muster the pace to win the 2,000 Guineas at Newmarket on May 3. But Australia has reportedly wowed connections on the gallops and we have been here before numerous times during O’Brien’s career; more often than not, elite performance follows rave review.

But not all top horses trained by O’Brien emerge immediately, and the trainer has the usual massed ranks of maiden winners and lightly-raced dark horses. And, while the 2014 season is still in its infancy, and most of the trainer’s runners seemingly short of peak fitness, the Montjeu filly Bracelet has already convinced many she is a top-notch prospect with victory in the Leopardstown 1,000 Guineas Trial.

Bracelet was guided to victory by the trainer’s son Joseph, whose 126 domestic winners last season enabled him to retain the Irish jockeys’ title with a record total. To repeat my mantra, counting stats are a hallmark of opportunity not quality, but the reputable jockey metrics I have seen rate the 20-year-old high. And research I have conducted strongly points to an ageing curve for flat jockeys on which Joseph has more than 10 years of improvement to come. That, of course, assumes he can maintain a racing weight, despite a lofty stature by jockeys’ standards. An able deputy for the trainer is a certain Ryan Moore, plus trusty stable riders in the underrated Seamie Heffernan and Colm O’Donoghue.

It’s been an increasing trend at Ballydoyle to keep a strong contingent of older horses in training either because, as some maintain, there has been a change of policy from the Coolmore brains trust, or simply because most of O’Brien’s best horses are now by stallions whose progeny improve with age. Either way, it is exciting to see the Derby winner Ruler Of The World around as a  4-year-old, not to mention the Breeders’ Cup Turf winner Magician. Both disappointed in Dubai, but that will soon be just a statistic, in all likelihood.

While O’Brien’s numbers are phenomenal, they still don’t fully capture the impact he has on the sport. His mercurial personality inspires a strong prior that every move he makes has something of genius about it, even when it makes you scratch your head. Some of O’Brien’s strategies with pacemakers, for instance, have been utterly bizarre to this observer’s understanding of pace, but there is often good business sense for Coolmore behind what seems to be a bad bet for Ballydoyle.

Finally, permit me to depart from the rational. To the scientific mind, every cause should have its measurable effect, every change its tangible force, and every result its discernible process. If there is something beyond that, something humans with the nebulous gift can bring to bear in their influence over a horse – which numerous horsemen swear there is – then O’Brien must have it. I’ll admit to being deeply suspicious of its existence, but I have never forgotten the feeling of a one-time encounter with O’Brien in a private audience at Ballydoyle. He told me about his take on the racehorse’s mind with the kind of intensity and descriptive animation that I have never heard anyone else own in any field of endeavour in which I have been interested.

The unmeasurable, the indefinable, the irrational is quite often a conceit of man, but, if there is a gift to training racehorses, above and beyond method and attention to detail, O’Brien has it. And If he doesn’t, I swear nobody else does.