For a long time, much of the world was able to wag its finger at American racing and its drug problems. Race-day Lasix and phenylbutazone uses, steroid obsession... these were U.S. issues, far from the perceived clean loins of the wider racing world. But late in 2014, something happened in Australia. Sydney trainer Chris Waller was found guilty of Lasix use on race day, while a January yearling tested positive for anabolic steroids at Magic Millions. And then, one after another, cobalt scandals spilled out onto the decks of Australian racing.

Trainers Peter Moody, Mark Kavanagh, and Danny O’Brien were implicated quickly in Melbourne, along with country Victoria partnership Lee and Shannon Hope. In Queensland, three trainers, all unnamed, are under investigation, while in New South Wales, trainer Darren Smith, based at Newcastle, returned a scroll of irregular swabs. Each was enough to indicate that an embedded culture of cobalt use, either knowing or accidental, had existed in Australia for some time.

Immediately, headlines of doping rolled off the mainstream presses. To the uninformed, cobalt read just like steroids or peptides, drugs that collected in dark, seedy corners. However, the reality is that cobalt is far more complex.

In its purest form, it is a metal, naturally occurring in soils and pastureland. It is an essential element for animal life, and is drawn up into grazing livestock that can synthesize it into vitamin B12. In conjunction with iron and copper, B12 is used to form and maintain red blood cells, which carry vital oxygen around the body. As such, the only known role of cobalt in animals is that of being a constituent of vitamin B12. In large animals, the tolerance to cobalt is very high, greatly in excess of the animal’s requirements. Therefore, naturally occurring cobalt toxicity is very rare.

When it came to horse racing, cobalt was occurring as cobalt chloride, or cobalt salts, a crystalline solid that was inexpensive, easily found, and orally applied. It was soluble in urine, blood, and water, and it was basic chemistry that it would elevate a horse’s production of oxygen-carrying red blood cells. In turn, this might assist a horse with its endurance, helping it to run faster for longer in competition. It wasn’t unlike the erythropoietin (EPO) allegations that shook international cycling in recent years.

Moody, Kavanagh, and O’Brien exclaimed their innocence. Among them, five horses had swabbed positively for cobalt. In Newcastle, Smith had 20 irregular swabs, of which 11 horses had won their respective races, and a further four had placed. There were claims from the trainers that elevated cobalt readings had occurred because of supplements, routinely known to contain cobalt, and routinely used in racehorse training. However, the science didn’t support that. Veterinarians and stewards in both New South Wales and Victoria were adamant that any elevated readings of cobalt could occur only as a result of deliberate administration, or massively contaminated feed or supplements.

The key to understanding this was the legal cobalt threshold that had been adopted across the Australian racing industry.

Pertinent to prohibited substances, on Jan.1, 2015, the Australian Racing Board (ARB) added to its Rules of Racing, rule AR.178C (1): “Cobalt at a mass concentration of 200 micrograms per litre in urine.” This meant that any cobalt reading found above 200 micrograms (200μ/L) in a litre of urine was a positive result. As a matter of comparison, Darren Smith’s Testarhythm, who won at Scone in May 2014, swabbed at over 6,000μ/L.

Media reports suggested that cobalt abuse in Australian racing was rampant and reckless, and had been for a long time. Insiders confessed that the sport was like any that gravitated to money: there were sideshow chemists that always were a year or two ahead of regulators. But if this was the case, what had caused the sudden and dramatic spill of the issue into the public spotlight? Better yet, who had caused it?

His name was Reid Sanders. He was a former chairman of stewards at the Macau Jockey Club, and former chief stipendiary steward in Queensland. He had also held an integrity role with Thoroughbred Racing New Zealand, but in August 2011, he had migrated to Harness Racing NSW (HRNSW). Today, he is manager of integrity and chairman of stewards, and is a fervent character for this job. Sanders has willfully pursued drug abuse in harness racing, and his fortitude for the rules has been effective. 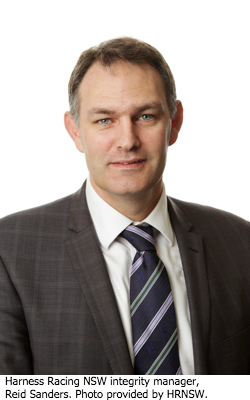 Early into his tenure at HRNSW, the troubles began. Sanders learned that certain HRNSW stewards had been taking bribes, and, in exchange, had been ensuring that certain trotting horses were not drug-tested on race days. Harness racing is a popular betting code in Australia. In New South Wales, it contributes more than AUD$410 million to the state economy, about half the sport’s national total. It is monitored by statute, regulation, and rules, but something was failing. Amid bribe allegations, leading trainers were being stood down over boldenone (anabolic agent) use, and in June 2013, cobalt popped up.

Sanders had been quietly learning about the prevalence of cobalt through a number of sources. People were coming to him in confidence, and the HRNSW vet, Dr. Martin Wainscott, had been gathering information. Sanders spoke to testing agencies in the U.S. and U.K., and in Hong Kong he liaised with Terence Wan, head of the racing laboratory that analyses much of the world’s racing samples. He also visited the U.S. to address the cobalt rumblings that were getting louder and louder in places such as Indiana and Meadowlands in New Jersey. It was this American trip that led Sanders to the conclusion that cobalt needed to be regulated within harness racing in New South Wales.

In August 2013, he reported this to the board of HRNSW. He admitted that Australia then had no laboratories capable of testing for cobalt in horses, as none possessed the required equipment. He believed that in regulating the substance, a permitted threshold needed to be adopted, and until it was, any regulation of cobalt was going to be vague.

It was. In September 2013, Sanders issued a press release that stated: “HRNSW warns against the non-standard use of cobalt salts or cobalt-containing supplements, as it is a breach of the rules.”

What constituted “non-standard use” of cobalt? This was where Sanders’s threshold was so important. It was his job to find out what a horse’s normal, naturally occurring levels of cobalt were, and to instigate a threshold that not only allowed for this, but also allowed for reasonable elevated levels from supplements and feeds. In partnership with Wainscott, Sanders located two Australia-based laboratories that could test for cobalt in horse urine, and he collected 80 samples for analysis. Sixty of the samples came from horses tested after harness races in New South Wales (though some horses were trained in Victoria), while the remaining 20 came from post-race collections in Queensland.

This test field of 80 was a population study, as Sanders and Wainscott tried to identify what the cobalt level should be in a “normal horse,” or a horse not treated with cobalt chloride (the inorganic form of cobalt that was likely to be administered to horses). When the initial results came through, Sanders approached a professor of analytical chemistry at the University of New South Wales. Professor D. Brynn Hibbert was an eminent statistician and chemist, and had a history of consulting in the racing codes.

For more than a month, Hibbert analysed Sanders’s 80 samples, and in November 2013 he issued a report. It concluded that the majority of the horses sampled, or 63 out of 80, displayed a cobalt concentration of 50μ/L or less. Of the remaining samples, concentrations varied between 97μ/L and a massive 3,460μ/L.

Hibbert concluded that 50μ/L could be taken as an upper level of cobalt in a normal, untreated horse. He suggested that an action level of 100μ/L might be suitable when determining a threshold in harness racing, but he advised that his findings were provisional. The sample field was a fraction of the greater Standardbred population, and there were no independent studies on a known control, or non-treated population. With this in mind, in late November 2013, Sanders reported to HRNSW that a cobalt threshold of between 150μ/L and 200μ/L could be settled upon.

The investigations were taking their toll. Sanders had become the target of personal threats on his safety, as had his family. HRNSW remained the only organization, and New South Wales the only state, in Australia to test for cobalt abuse. Sanders was accused of having too determined a grip on harness racing, and of driving away owners. Nevertheless, on Dec. 16, 2013, HRNSW passed a landmark amendment to its rules when it introduced a cobalt threshold of 200μ/L, the first racing body in the country to do so. At levels above 200μ/L, cobalt was now a banned substance in New South Wales harness racing.

It didn’t take long for positive swabs to appear. By February 2014, two harness trainers were over the coals on cobalt. Three horses had returned samples of 710μ/L, 550μ/L, and 570μ/L, and Thoroughbred racing had begun to pay attention. Its administrators were hearing, as had Sanders 12 months before, that cobalt was equally as rife among Thoroughbreds, and in a preemptive strike, Racing Victoria adopted the 200μ/L threshold on April 14, 2014. South Australia followed suit that July, and by the end of the year, the ARB had made it national policy.

The response from the Thoroughbred code was impressive. It had digested the research by HRNSW, and accepted that while the methods of the two sports were different, physiologically, the animals were not. Cobalt had the potential to pharmacologically influence a horse’s racing performance, and normal cobalt levels in an untreated Standardbred should be the same as those in an untreated Thoroughbred.

It was inevitable that some flat trainers would be caught out. However, few were prepared when top-shelf Peter Moody became the first high-profile casualty with Melbourne Cup runner Lidari, followed quickly by fellow Melburnians Kavanagh and O’Brien.

The shockwaves of Australia’s cobalt scandals have resonated around the world. In late 2014, the British Horseracing Authority undertook a survey of a significant number of horses to determine any possible culture of cobalt use. It found none. In Hong Kong, a threshold of 100μ/L was adopted. In Dubai, the Emirates Racing Authority sent both urine and plasma (blood) samples to Hong Kong for testing, and results confirmed there was no treatment abuse. In fact, among the world’s leading racing jurisdictions, only the U.S., which has failed to instigate any threshold, has been embroiled in damaging cobalt scandals of the kind that has sullied Australian racing.

Moody, Kavanagh, and O’Brien, along with every implicated trainer, await their fate through a long and testing process of reviews and appeals. The whole thing has made Australian racing turn inward. There have been questions about trainers’ reliance on vets, trainers’ reliance on supplements, and whether all vets should be registered with racing’s governing bodies. In a newsletter released by OTI Racing, which owns implicated Lidari, the group cited an over-reliance on vet treatments among Australian trainers.

It said: “Such unwarranted services take the focus away from horsemanship, the core of a trainer’s business. To highlight our concerns on this matter, we know that, on average, vet costs in Australia are over four times those of some of the world’s best training stables in France and the U.K.”

There has also been inflamed debate in Australia on the effectiveness of industry self-regulation, and just when racing didn’t need it, cobalt has sparked wider public scrutiny about the ethics of handling horses, and the immorality of doping them. However, it cannot be said that Australian racing has responded clumsily. As OTI highlighted, lack of action would only add to loss of credibility, and the loss of credibility because of cobalt has already been great enough.