Over the last few years, Chris Waller has enjoyed many fantastic, emotional days as the trainer of Winx. Last Saturday, without her contribution, he produced the greatest single day in TRC Global Rankings history in any category.

Waller, the Kiwi based in Australia, sent out the winners of SEVEN Group races, eclipsing the previous best of five – a record he jointly owned - in the period since 2011. 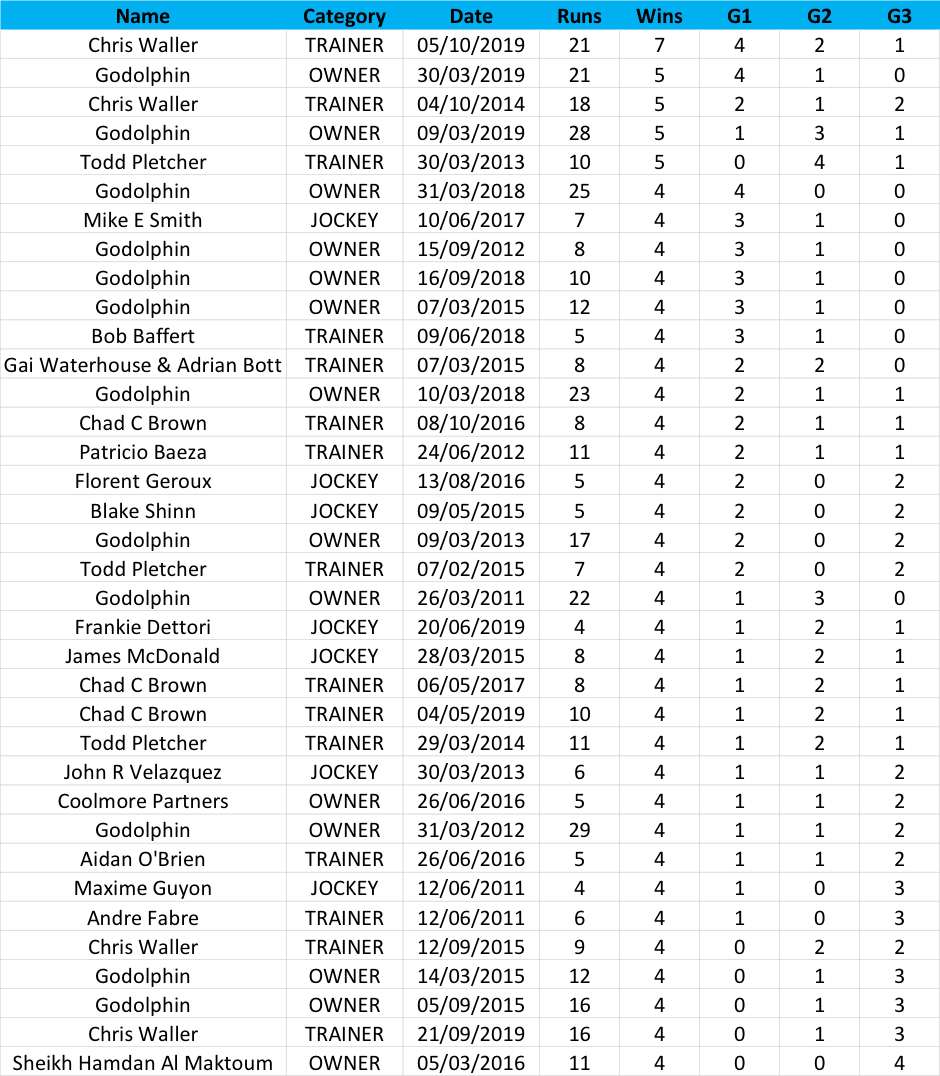 As the table shows, there had been 36 separate occasions when a competitor in one of our four categories of JOCKEY, OWNER, TRAINER and SIRE has had at least four winners in a single day, and, on four previous occasions, five winners in a day.

On October 4, 2014, Waller himself set the record for a trainer when sending out the winners of two G1s, 1 G2 and two G3s. But the best ever day was that of owner Godolphin with four G1 winners and a G2 winner on Dubai World Cup Day, March 30, this year.

Now, however, Waller stands alone with a haul that earned him a 9pt increase in his Performance Index and a return to the #1 trainer spot in Australia, eclipsing James Cummings. Waller might have earned even more points if we did not have so much other data on him – TRC Global Rankings is not an exercise in playing with numbers but ranks competitors as to their actual percentage chance of beating other competitors in their category in head-to-head competition.

Waller’s haul began when Global Quest won the G3 Arrowfield Breeders Plate at Randwick under Waller’s compatriot James McDonald – himself responsible for a four-winner day previously. Later on the same card, the pair combined for Waller’s first G1 win of the day, when the filly Funstar landed the odds in the Darley Flight Stakes in impressive style.

It was a close call once again when Glen Boss steered home Kolding for winner #4 on the Randwick card in the G1 TAB Epsom, a one-mile handicap in which 19 runners started and Waller also trained the third, 12th, 15th, 16th and 18th finishers. Kolding beat the James McDonald-ridden Te Akau Shark, joint favourite with the winner, by a short head.

Waller would probably have considered that a standout haul on its own, but better was to come. In the next race at Randwick, the Heineken 3 Metropolitan, another big-field handicap, he struck again when Brenton Avdulla got Come Play With Me home in a real squeaker. In this, the ninth finisher – another Waller inmate – was only four lengths back at the line.

Randwick was finished, but Waller wasn’t. With the action transferred to Flemington, jockey Michael Walker kept up the stable momentum with winner #6 on Haut Brion Her in the G2 Blazer Stakes. By this stage, rival Cummings must have been sick of the sight of a Waller-trained runner in the winner’s enclosure, as both Pohutukawa (second) and Savatiano (fourth) helped fill the frame in this one.

The final Waller winner was the most notable. The ex-British Kings Will Dream, who scrambled home in a minor-track maiden in his native country before becoming a G1 star down under, won another photo-finish for the stable, beating Frankel-sired Finche in the G1 Turnbull. Again, Cummings had a rooting interest with the old stager Hartnell beaten under a length in third.

Kings Will Dream, who was getting seven pounds from Hartnell and needed to run to a Racing Post Rating of only 109, was third in the previous renewal of the Turnbull to none other than Winx. On that occasion, Winx had laughed at him (in common with virtually every other horse she encountered during her winning spree). This time, it was only the concept of handing out G1 glory to the winners of handicap races in receipt of a lot of weight that was ticklish.