Even if you’re just skimming the biography of Charles (“call me Chuck”) Winner on the Winner & Associates website, paragraph four is an eye-catcher.

It’s about the “crisis communications and preparation and management” part of the company. It references Winner & Associates, “under Chuck’s leadership” helping clients deal with the nuclear accident at Three Mile Island, the explosion of the space shuttle Challenger, Major League Baseball’s ouster of commissioner Fay Vincent, and other well-known crises. 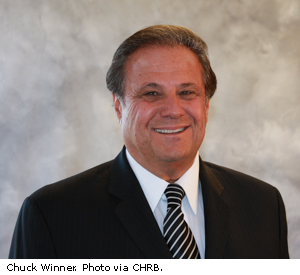 Excellent credentials for a man who was appointed to the California Horse Racing Board (CHRB) in April 2012. A man who was unanimously elected Chairman of the Board in December 2013 following the term expiration of former chairman David Israel.

Winner took over just in time to see the closing of Hollywood Park after 75 years as a pillar of the Southern California circuit. To oversee a transition year of 2014 in which: Santa Anita and Del Mar took on additional dates; Los Alamitos lengthened its track and renovated facilities to accommodate Thoroughbred racing and take over dates which Fairplex Park relinquished; and to deal with ongoing issues such as medication and declining numbers for both foal crops and owners, among others.

Looking at the overall picture, some concluded that California, if not all of horse racing, was in a state of crisis. But Winner, who knows about crisis situations, said it isn’t so.

“I wouldn’t say that it’s in a crisis,” Winner said in a recent interview at Del Mar. “I would say if some improvements aren’t made and we don’t turn things around, we could enter into a crisis.”

Generally, Winner pointed out, corporations and governments have plans for operations in a crisis. But communications in time of crises, his company’s specialty, can be more important because it’s what people remember more than the crisis itself.

“As far as racing is concerned, in my view it’s certainly not at the crisis stage. A crisis is when something [tragic] has already occurred and you’re trying to work your way out of it. I don’t think we’re in that situation.”

To avoid ever getting there, Winner said this will require work both within and without the industry.

“There are things you try to do to improve the image of, in this case, horse racing and specifically horse racing in California,” he explaned. “The most important thing is teamwork. The critical thing we need to do is to bring this industry together. To eventually be speaking with a single voice, in California certainly, but nationally as well and maybe internationally.”

Speaking with a single voice, Winner said, would facilitate being more clearly heard, and understood by a general public, which, in turn, racing needs to strive more to understand.

“The first rule of communications is to understand what your audience is thinking,” Winner said. “If you can understand what’s in their heads, then you can start to inform and shape or change opinions. Right now the opinions, broadly speaking, are not terrific. There are a lot of people who think negatively about our sport, and we have to change that.”

Cooperation between the various groups that make horse racing go -- breeders,  owners, trainers, jockeys, players, racetrack management -- has been long sought but seldom, if ever, achieved. Still, the goal is worth pursuing.

“This sport doesn’t work with individual pieces,” Winner said.  “It only works as a whole. And that is a problem. As the pie gets smaller and smaller, the disagreement as to how to split up that pie becomes greater and greater. That’s working very much against us and we have to turn that around.

“If we can accomplish that, we will have done an awful lot. But we have to accomplish it in the right way. And if we don’t do it in a way for the horses and whoever’s on their back, then we’re not doing the right thing for racing.”

“Obviously, you don’t want to lose venues. Especially ones that have the traditions of mostly Hollywood Park, but also Fairplex,” Winner said. “Having a circuit is quite important. We’re going through an adjustment period as everybody can see. But, at the end of the day, I think we’re going to be better off. I’m very excited about the extra days [in the fall meeting] at Del Mar. I’m very excited about what’s going on at Los Alamitos.

“It will take time for people to learn about [ the new dates and places]. But I think Los Alamitos, location-wise, is terrific and I think management there is doing a wonderful job of turning that track into a high-class Thoroughbred track. The new track is very good, I think it’s safe and it’s sound.

“As far as Del Mar is concerned, it has always been a first-class organization and operation, and giving them more days in this venue, I think, is a big plus. As are the added days for Santa Anita.

“There are negatives, but I think they can be dealt with and turned around. Nothing disparaging about Hollywood Park or Fairplex, but we shouldn’t look at the situation as negative but as positive in the long term.”

The 75th Del Mar summer season, which concludes Wednesday, Sept. 3, figures to produce attendance and handle numbers higher than any other California meeting, as it has for several years. But entering the Labor Day final weekend those numbers were down approximately 7 percent from 2013. And numbers of horse fatalities, only a handful in 2013, were in the teens. Several of them occurred on a turf course that was newly-widened and sodded.

“Del Mar has worked very cooperatively with the CHRB [through the situation],” Winner said. “Most of the ideas put into effect, trying to make everything safer, were theirs.

“You never want to see horses go down. If there were ways to avoid that, it would have been better. There are a lot of factors involved. Certainly most of the jockeys felt that the course was in very good condition, and yet we had catastrophic injuries. But if you look at the history of some of the horses, you can see where that might have had something to do with it.”

Winner, a horse owner since 1985, said he regards the horses and riders as “My top constituency” and their health and safety the No. 1 priority. As such, he gives the board under his leadership commendable marks in the areas of medication rules and the policing of violators.

“I think when I came on the board, California was ahead of the pack in the area of track safety and medication,” Winner said. “We’ve improved on that, I hope. We’ve worked very hard attempting to.

“We’ve tried to toughen the rules, I believe we’ve toughened the rules. It’s not just medication, it’s claiming rules and several other things. We’ve done things in the area of steroids and other classes of medications to make the penalties more severe. And I believe we’ve been tougher in penalizing those who break the rules

“I’m not a vet, so I can’t speak to the advantages and disadvantages of certain types of medication. I have to rely on those people who know veterinary medicine and know horses. I don’t believe there is a be-all and end-all answer. My view is we have to look at each specific situation, each individual medication, and decide whether it is being used properly or not. Whether it serves as an enhancement or just a cover for getting an edge. If it’s truly beneficial to the animal, then I’m not opposed. I think there are lots of times when horses benefit from certain forms of medication -- just like humans do.

“My thought is, I don’t want to go to either extreme, over medication or under medication.

“I would like to see nationwide medication rules, but I know it’s very controversial. Whether we’re going to get there quickly, I don’t know. But I think it’s important to listen to all sides. But personally, I support some kind of national medication guidelines.”

There is no easy fix for California’s problem of shrinking foal crops and declining numbers on the owner and breeder lists.

“The two go hand in glove,” Winner said. “You reduce the foal crop, you reduce the number of owners. Ipso facto. There are things the industry can do about it through bonus programs and other incentives. What Del Mar has done with its ‘Ship And Win’ program, for instance, brings horses and owners to California, and hopefully once here, they will stay to race and breed here.

“Breeding is down everywhere, not just in California. We’re suffering because we’ve been on a more steep decline for a number of years than other places, but it’s not just California’s problem. Also, we are at somewhat of a disadvantage to those states that have slots and other kinds of gaming that produce revenue for breeding programs as well as purses. We have to make up for that in other ways. Anything we want to do to help breeding in California we, as a board, want to do.”

The CHRB has also recently taken tentative steps to initiate study of optimum takeout. At the Board’s Aug. 21 meeting, Winner asked the Pari-Mutuel Operations, ADW and Simulcasting Committee to schedule for discussion a suggestion that the industry hire an expert to suggest options for determining optimum takeout levels.

“Our options with respect to takeout are limited other than to work with the industry to help give guidance,” Winner said.

It’s too soon to draw any conclusions. But to this point, Chuck, the Chairman of the California Horse Racing Board, looks like a ... Winner.