One autumn evening in 1833, after a day of hunting, Prince Lobanov emerged on horseback from the forest of Chantilly onto the vast meadow that ran alongside it. Inspirited by the thrill of the day’s hunt, he and his companions made a wager: The first to arrive at the Grandes Écuries (great stables) on the opposite side of the lawn would win 100 louis. Lobanov lost the bet, but what he and his comrades discovered was perhaps a greater prize: a soft and silky terrain, ideal for racing. A year later, that grassy plain became home to the Hippodrome de Chantilly.

The Hippodrome de Chantilly is the oldest extant racecourse in France and one of the most picturesque in the world. Since the 1830s, turfistes (racegoers or bettors) have made annual pilgrimage to the hallowed ground some 40 kilometres (25 miles) north of Paris. Set in a spectacular location in the grounds of the Château de Chantilly, adjacent to the bombastic splendour of the Grandes Écuries, the racecourse boasts one of the most monumental backdrops in racing history.

The Grandes Écuries was commissioned by Louis-Henri de Bourbon in 1719 to house his hunting and carriage horses; it now meets the current track at its far turn. According to lore, Louis-Henri had an unshakeable conviction that, after his death, he would be reincarnated as a horse. So, he set about building the most beautiful stables in the world. Designed by architect Jean Aubert and completed in 1736, the Grandes Écuries are an essay in French neo-classical exuberance. The building is lavishly decorated with sculpted keystones, bas-reliefs, pilasters, and statues, including a repertoire of rearing horses, stags, wild boars, lions, and hunting trophies. Its 186-metre (525-foot) façade has presided over racing at Chantilly since the first meeting there on May 15, 1834.

That meeting was successful enough to merit a second the following year and, for this, temporary stands were erected. In 1847, the duc d’Aumale, the landowner and patron of Chantilly, commissioned permanent replacements, to designs by the architect Jean-Louis Grisard. They consisted of a unified scheme of two flanking stands and their centrepiece, the Pavillon du Prince. 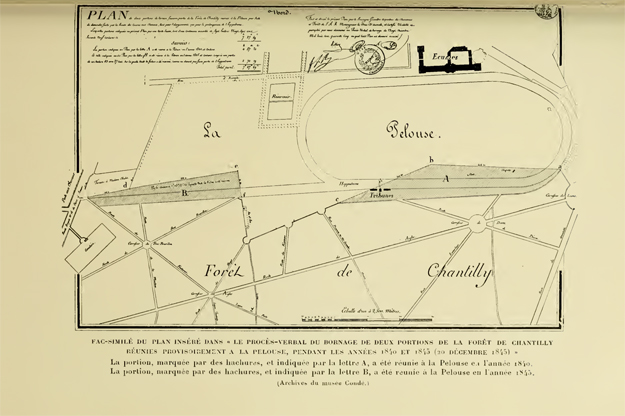 Chantilly’s wooden stands were smaller and much simpler than extant racecourse architecture across the English Channel. Compared to the 100,000 strong crowds who attended the St Leger or Epsom Derby in England, racing in France was still an aristocratic pursuit in its infancy. Grisard’s three stands at Chantilly accommodated only 700 spectators.

Their centrepiece was the Pavillon du Prince, a small, two-storey pavilion reserved for the duc d’Aumale. It was petite yet distinguished, encompassing a crowning glazed tower and glazed polygonal salon overlooking the track. This specialised building type, the first of its kind in France, was a development of the English concept of royal boxes, but elevated to a higher, more resplendent plane.

Chantilly’s layout and style characterised the first generation of French racecourse construction, also embodied by Longchamp, Vincennes, and Enghien (1879), as the sport slowly but steadily gained a hold upon the nation. Although Chantilly never drew the mass audiences of Longchamp with its city-centre location, its tally of racing days and popularity gradually increased. Inevitably, it outgrew its 1847 buildings and in 1879, it was decided to rebuild. The timeworn stands were replaced, the track enlarged and its buildings relocated westwards and southwards. Pierre Jérôme Honoré Daumet, whom the duc d’Aumale had commissioned to reconstruct the Chateau de Chantilly following its ruin during the Revolution, was selected to design the hippodrome’s new buildings.

Daumet’s stands were larger and more robust. Capable of holding more than 3,000, they took cast iron and ashlar stone for their materials. Daumet also reduced the number of stands to two: a Grande Tribune and a Tribune du Prince. Stylistically, the Tribune du Prince echoed its predecessor; the classical Grande Tribune was new. From the rear façade of the long, rectangular building, a semi-circular rotunda projected. To either side stood a square stair tower, that gave access to the tiered, uncovered rooftop seating and yielded panoramic vistas from the upper storey. The rear façade was colonnaded, horse-head medallions and urns adorned the two towers, and curving consoles embellished entrances and stairways. Its simple classicism and building materials were symptomatic of the second generation of racecourse architecture in France, of which Chantilly was a prescient example. The stand survives today as the oldest grandstand of any racecourse in the country.

Although many French racecourses were redeveloped in the 20th century, Chantilly’s historic structures fortunately escaped the bulldozer. With its elegant stands, breath-taking backdrop of the Grandes Écuries, and the natural beauty of the neighbouring forest, Chantilly was regularly heralded as the world’s most beautiful racecourse.

However, by the 1990s, its untouched facilities almost brought about its demise. After years without investment, Chantilly’s future seemed bleak. The French racing industry was in a precarious condition. Betting revenue was sinking, crowds were down, and a government financial contribution in 1992 was made on condition that at least one Ile-de-France course would be closed. In 1994, nine out of the 12 members of French racing’s ruling body voted to close Chantilly with immediate effect.

Chantilly, though, got its 11th-hour saviour. A consortium of local advocates, the Institut de France and the Aga Khan formulated a last-minute rescue package. With that, Chantilly set out onto the slow road toward modernisation. 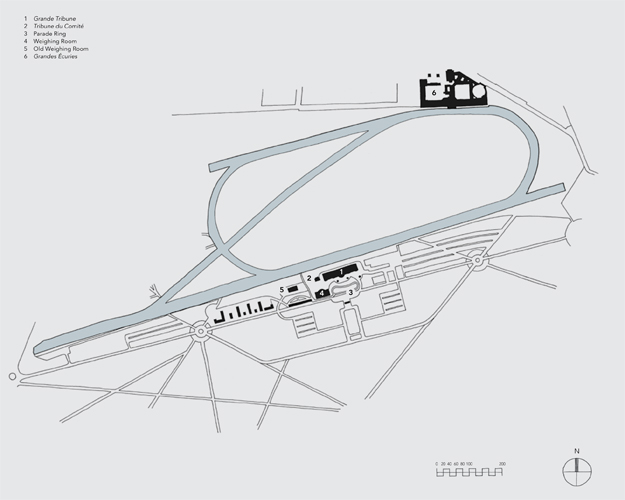 In 2005, the first phase of a two-stage physical redevelopment of the racecourse was completed. The Grande Tribune was extended, creating a panoramic restaurant on the first floor, plus basement kitchens, pressroom, and private boxes. For the plan’s second stage, the road running behind the grandstand was realigned. This allowed a new paddock to be laid out behind the grandstand, repeating the original 1847 arrangement. Hitherto, the trek to and from the paddock at the west end of the complex had been an inconveniently long one for racegoers. A sunken, kidney bean-shaped parade ring was completed in 2007, flanked by a new weighing room with roof-top terrace and complemented by new entrances and landscaped parking.

The new layout was an unmitigated success. The displacement of the road and re-siting of the paddock greatly improved circulation; no longer was the public tightly compressed along the finishing straight. Overwhelmingly, reaction to the redevelopment of the hallowed site was positive, not least because with its completion Chantilly’s future was secure. ‘These days, the track is state-of-the-art, yet it has retained its old world charm,” praised The Daily Telegraph upon the unveiling of the new facilities in 2007.

The graciousness of Chantilly’s environment is world-renowned. Its stately 19th-century stands transport today’s racegoers back to that golden age of racing. Chantilly’s architecture is remarkable not only for the heritage that survives today, but also for the vanguard position it has held in piloting French racecourse design. Its 1847 stands codified the nature of the building typology in France, providing a template for the first generation of racecourse structures there, whilst its Grande Tribune (1881) was a precocious example of the second generation. In 1934, one Australian journalist wrote that Chantilly “has been the birthplace, the nursery, and the academy of the Turf.” Undoubtedly, it has also been the birthplace, nursery, and academy of French turf architecture.