The Baltimore County Equine Center is found in a corner of the Maryland countryside that looked on a recent sunbaked July morning as though it had been torn from a John Henry Twachtman painting, a delirious quilt of yellows and greens and browns, hawks circling the thermals and honey bees gorging on pollen in the hazy golden sunlight.

“Yeah, it’s really beautiful here,” said a county employee who volunteers at the center, during a tour of its broader 150-acre agricultural playground, the Maryland Agriculture and Farm Park — the “Ag Center” — a place where experimental crops are grown, beehives kept, and produce for nearby soup kitchens reared in bulging glasshouses. “It’s just kind of perfect, isn’t it?”

Perfect, indeed, for all sorts of things, including a marriage of convenience between a racing industry under fire for its broken covenant to protect retired racehorses and a portion of the public left too long to suffer in the shadows.

That’s because the center with its six resident off-track Thoroughbreds — five from the Foxie G Foundation and one from Sagamore Farm — has over the past year and a half played host to a number of equine therapy programs that have filled a glaring void in the area. 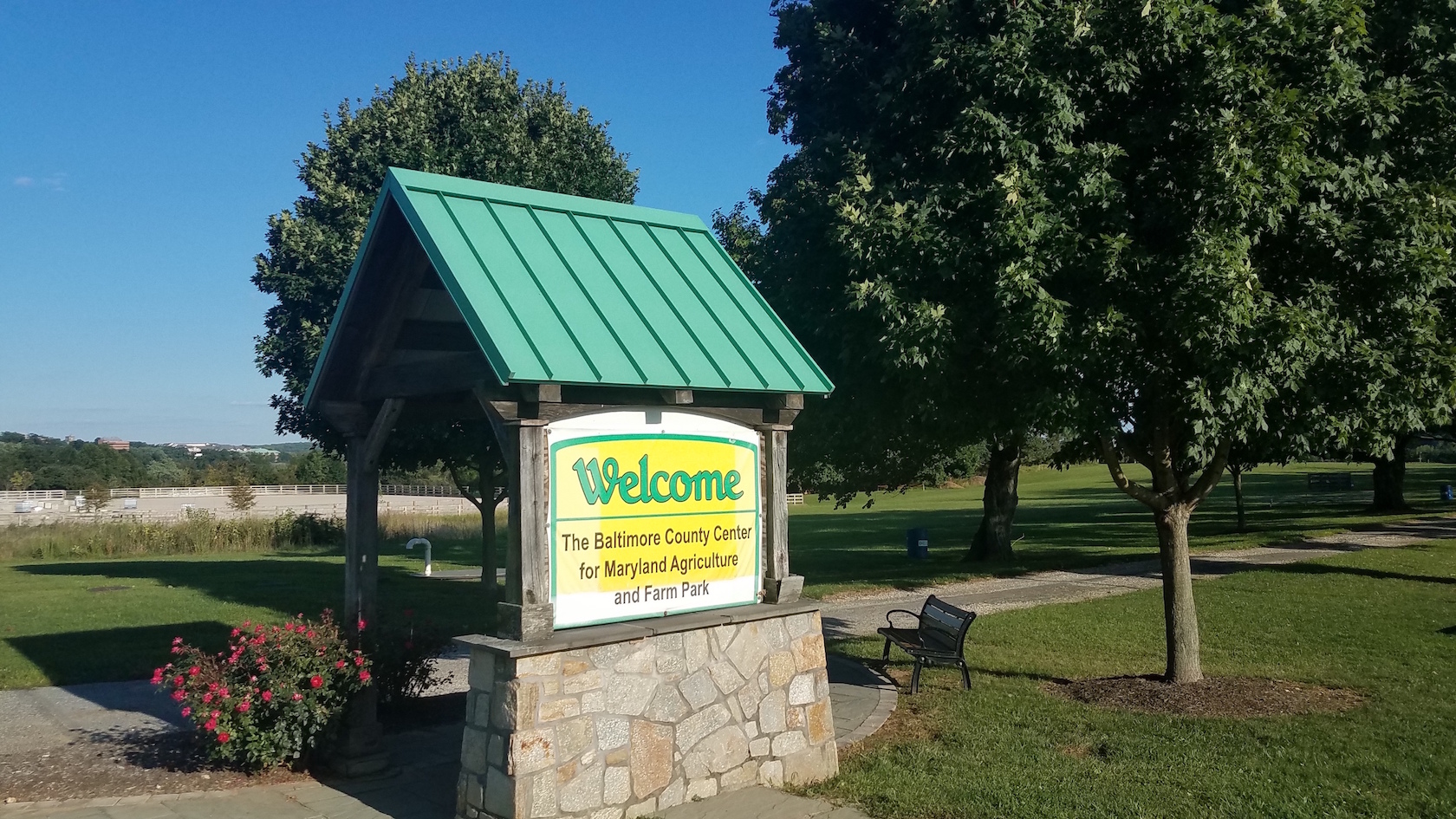 One is a partnership with Saratoga WarHorse, a Thoroughbred therapy program for veterans suffering PTSD. “With 22 veterans taking their own lives every day, it is an accomplishment to positively affect even one life,” said Allison Cherkosly, executive director of Saratoga WarHorse.

Using as a blueprint the Monty Roberts Join-Up approach, the center also provides therapy for local first responders. Then there’s a burgeoning relationship with the Eagala program, what’s described as an ‘equine-assisted psychotherapy’ for at-risk youth who have suffered things like developmental trauma, and sexual and physical abuse.

“We’re the only police or law enforcement agency that I can think of in the country, or in the world as a matter of fact, that’s doing what we’re doing,” said Gerald Brooks, a 32-year veteran of the police force. Now retired, he still works as a civilian for a local police department and volunteers his time (and money) as an instructor in the first responder program.

Most importantly, these programs work, said Brooks. “I remember vividly a couple folks who came through here who later said that the program saved their life,” he said.

As splendid as the results have been, however, teething problems have dulled the shine a little. For one, a local political movement aims to reduce the equestrian footprint at the Ag Center.

“What was this built for? For the agricultural industry,” a nearby farmer and a member of the agricultural council complained to the Baltimore Sun last year, about the facility. “We are methodically being pushed out without any consultation.”

And despite a five-year Motion of Understanding (MOU) between the program and Baltimore County, no Saratoga WarHorse classes have been conducted at the facility since June — a window being used to iron out a few issues stemming from a prior change in leadership, said Cherkosly.

Nevertheless, right now, the center’s Eagala program, along with those geared towards county employee first responders — many of them veterans, is continuing as normal. What’s more, “all three of our program locations each take a few months off every year, so this break isn’t out of the ordinary,” said Cherkosly, which leaves her optimistic of the WarHorse program’s swift resumption of service at the center.

“Saratoga WarHorse invested a significant amount of time, money and resources to open this third location at the request of Baltimore County, so we have every intention of fulfilling our contract with the County for the next four years,” said Cherkosly.

All this comes as a time of growing scientific acceptance of equine therapy, spearheaded by Columbia University’s Man O’ War Project – the first university-led trial to study the effectiveness of equine-assisted therapy for veterans diagnosed with PTSD.

Last year, 65 veterans from all over the U.S. took part in 13 Saratoga WarHorse classes in Baltimore, with each three-day session going something like this:

The participants gather on the first day for a meet-and-greet dinner, and an overview of what they can expect from the program. Then, the following day, they’re given a crash course on how horses think as prey animals, how they react to humans and other stimuli, said Brooks, who instructed some of the classes.

The hands-on part begins with lessons on the lunge line, along with a run through of the Monty Roberts join-up routine to connect with the horse. When the participants are ready, they move these exercises — first conducted with humans standing in for the horses — from a large arena into the smaller confines of a pen.

“And then we do it with the actual horses,” said Brooks.

The whole process “puts everything that they carried up to that day on the back-burner … You can see the emotional release on their faces,” he added. “We’ve heard from many, ‘it’s the best night sleep I’ve gotten in a long time.’”

Then comes the debrief.

“We don’t document these things because they’re highly confidential,” said Brooks. Though he gave an example of the sort of remark he hears afterwards:

PTSD isn’t an intractable problem only for veterans. This 2017 review study found that policemen and firefighters are more likely to die by suicide than in the line of duty, and can be as much as five times more likely than the civilian population to suffer PTSD and depression.

“I’m a big believer that there should not be stigma if you are a first responder who needs help,” said Marc Junkerman, a local law enforcement veteran of the Harford County Sheriff’s Office.

“For years and years and years, that was taboo. And that has been one of the biggest silent killers, the fear of ridicule. The fear that you’re going to lose your job. You’re going to be looked on as less than,” he added. But now, “we’re starting to break down those walls.” 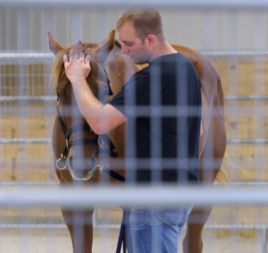 Junkerman is coordinator of his department’s wellness and resilience program. Classes at the equine center aren’t mandatory, though he has in mind an ideal candidate when fishing for recruits. “Someone who’s looking to help themselves,” Junkerman said. Not that first responders are always cognizant of this need.

“Here’s the funny thing: sometimes when you’re down in the hole, everybody else knows it but you,” Junkerman said.

When he’s selling the program, it’s with first-hand authenticity that he relays the details. “It was one of the best experiences I’ve had where you had the ability to look yourself in the mirror, to really figure out what this particular program means to you,” said Junkerman, an army veteran before he joined the police force.

“This is about you going in there, connecting with the animal, conquering your fears, realizing that this is bigger than all of us, and sort of putting down the weight and surrendering to the moment, which is something very challenging for first responders and police officers.”

Typically, participants of SaratogaWar Horse are limited to the program’s three-day outline. But, if local first responders wish to return to the equine center in Baltimore for follow-up sessions, “they can come to Eagala,” said Berger.

So, just what is Eagala?

“It’s not rainbows and unicorns I’m afraid,” explained Ellie Williams, who runs the program at the equine center.

Williams was born in England, emigrated to the U.S. when she was a teen. To the untrained ear, her accent’s as American as a Fourth of July rodeo. But every now and then her roots reappear in her voice, like tea leaves at the bottom of a cup.

Williams worked in child services for ten years, and it was during this time that she became disillusioned with the thin menu of help on offer for the children she encountered who had suffered all kinds of horrific traumas and abuses.

“I never found a good therapeutic intervention for them,” Williams admitted. And then she stumbled across the Eagala program - an “out-patient equine therapy” perfectly geared towards at-risk youth, foster children and adoptees.

Eagala is about 14 years old, has been at the Ag Center for about a year-and-a-half. “Having to be kind, patient and calm with a horse is helping them learn to build relationships in a healthier way,” she said, about the reason Eagala works for troubled kids. 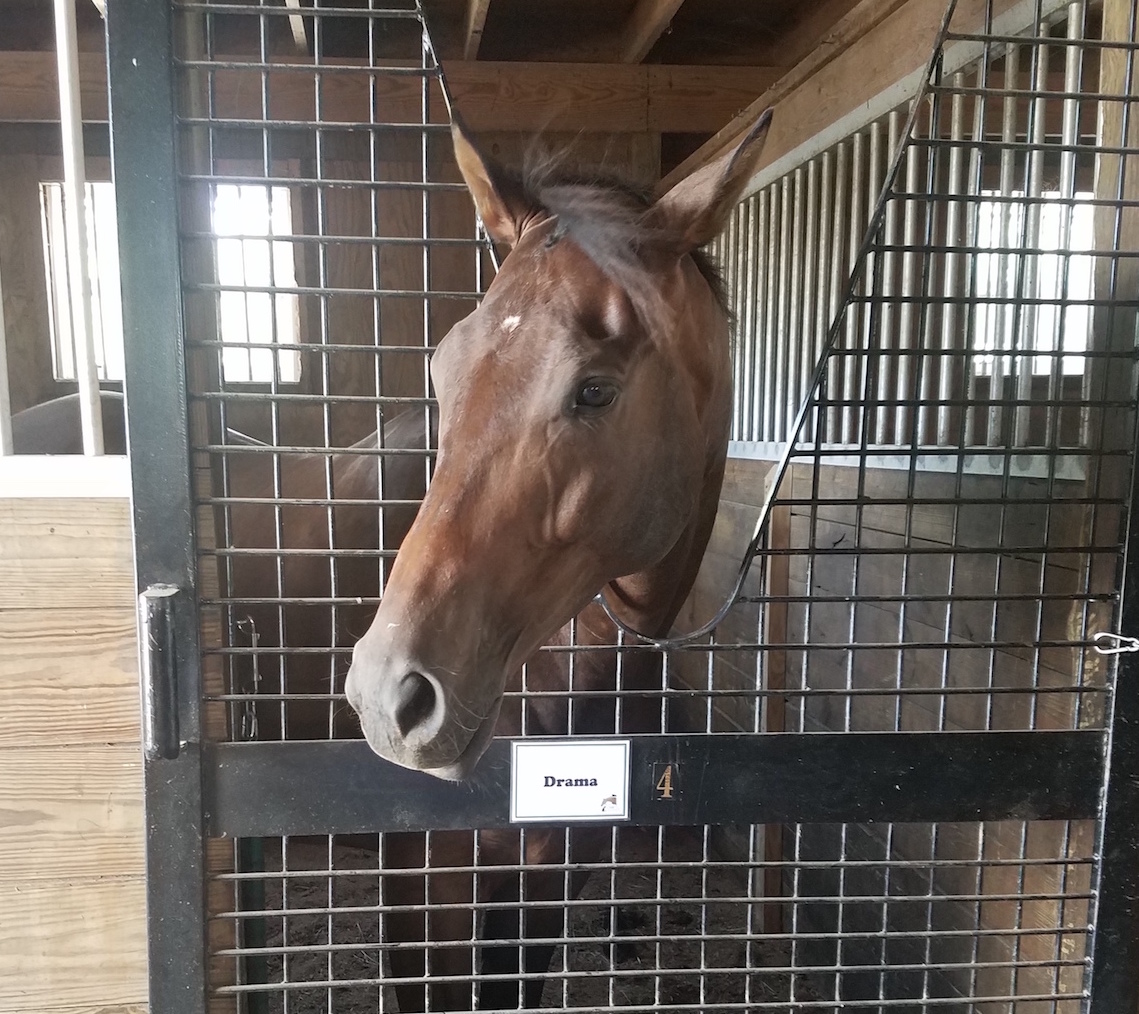 “A horse will give you immediate feedback. If you hit it, there’ll be a reaction,” Williams said.

Eagala also serves veterans found guilty of things like drink and drug offenses. “I had a veteran, he survived Afghanistan, Iraq, and he came back, and his son died in a horrific boating accident. He did what most people do – he self-medicated, and just was in a fog,” she said.

“And the physicians, they were like, ‘take this, this’ll help you,” said Williams, about the way in which the veteran was initially offered a pharmaceutical band-aid rather than therapy. “They never helped him deal with the trauma of losing his son, which triggered the loss of losing his buddies from overseas.”

When the veteran was in the Eagala program, however, “there were times when he stood in the field and he was just tears, sharing the loss of his son,” she said. “I tell you, those horses were facing away, not paying any attention, and as soon as he had that emotion, the alpha horse literally picked his head up, turned around, and went straight to him, head on his chest, like, ‘I’m here for you.’

Money — or lack thereof — is an ubiquitous problem when it comes to the first responders’ program.

“Hopefully we’ll come across some funding soon,” said Brooks, who volunteers his time with another instructor, while a nearby Marriott Hotel donates rooms to the participants. “That’s what we’re really missing.”

But despite the lingering questions marks and challenges, Brooks is optimistic for the future. In early September, representatives from other Maryland jurisdictions toured the facility — a visit that Brooks and Co. hope will spur broader interest in the programs there, especially considering the urgency of the mental health crisis facing the nation’s police, firefighters and combat veterans.

Just take the New York Police Department, which experienced six police suicides over a period of just ten weeks during the summer.