The trainer who leads the world in Group/Graded wins now heads TRC Global Rankings outright for the first time. America’s Chad Brown (+3pts, #1 from #2) has been so dominant in 2019 that he takes over at the top with the highest Performance Index of his career.

Brown briefly disputed the top spot with Charlie Appleby (no change, #2 from #1) last month, but his relentless stream of winners – coupled with a quiet spell for the latter – has seen him usurp the Godolphin trainer at the top of the rankings.

Brown operates mostly on the East coast of North America, where he added three winners in the shape of the G1 CCA Oaks (Guarana) and the G3 Lake George Stakes (Regal Glory) both at Saratoga, and the G3 Ontario Colleen Stakes (Seek And Destroy) at Woodbine.

As a result, Brown extends his clear lead in the table of aggregated Group and Graded winners for 2019 for trainers round the world: 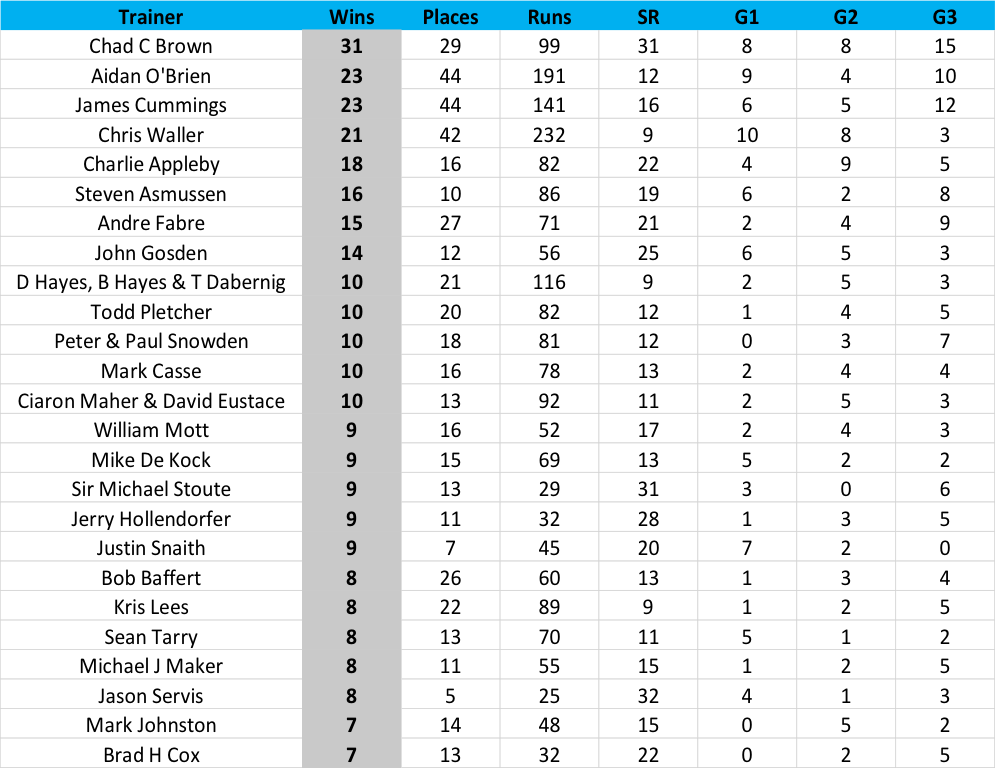 Brown leads Ireland’s Aidan O’Brien (-2pts, #5 from #4) and Australia’s James Cummings (-1pt, #8 from #7) by no fewer than eight wins with a total of 31. This pushes his TRC Performance Index (shown in the main rankings tables in the column headed ‘Points’) to 1076, the best of his career. He has steadily increased both his number of wins and the rate at which they have been achieved, as the following table summarises:

It is a general trend of a trainer’s career that, as the number of runners increases, the strike rate (SR) of the group decreases; it becomes harder to be efficient the more frequently the stable strength is spread around. Yet Brown’s 2019 SR of 31 percent is his best annual-based figure by seven points. Is this sustainable? And will he surpass last year’s total of 47 Graded wins?

With this year barely half complete, we need to parse the information differently to make a better projection of the rate at which Brown is winning races this year. So, let’s use data only until the end of July for each campaign, and present the same table format again:

This truly is World #1 form – which is why his TRC Performance Index of 1076 is at an all-time high.

Here are the top 15 seasons by wins for trainers around the world in Group and Graded races since 2011. You will notice that O’Brien – World #1 by our rankings for the majority of this epoch – dominates the figures (for these purposes ‘Country’ is the trainer’s location): 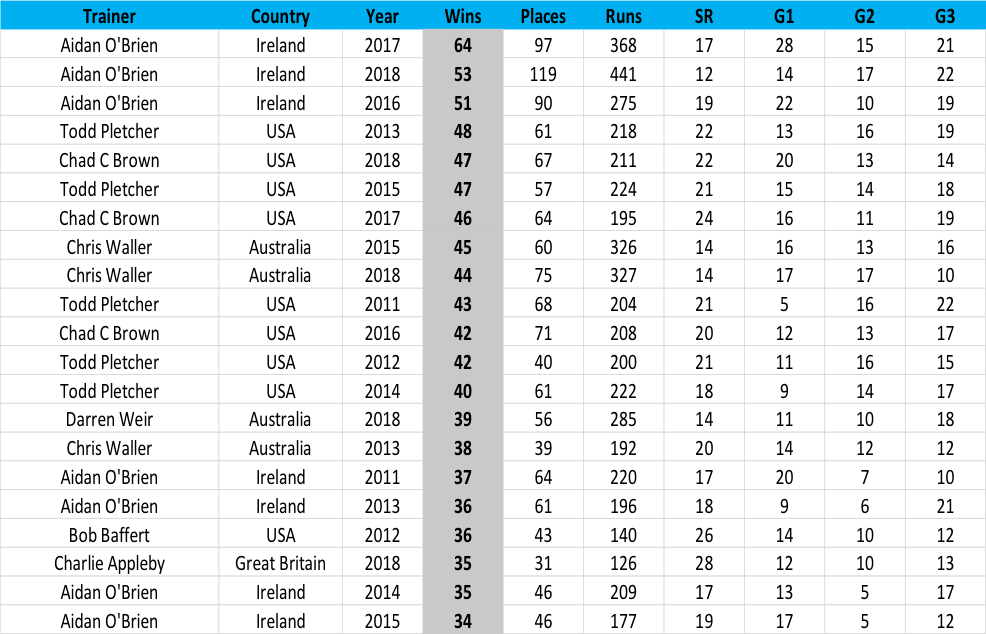 How ‘good’ a world #1 is Brown? Well, to answer that question let’s first take a look at what is normally required to top TRC Global Rankings for trainers. There have been 290 weeks of rankings now and 307 world #1s (17 weeks we had joint #1s), and on 197 occasions (64%) the highest-ranked trainer has had Brown’s Performance Index (1076) or less. So, we can say that Brown’s 2019 season is in the 64th percentile in terms of quality among all world #1 trainers by our metrics.

At first blush, the concept that Brown is in the 64th percentile of all #1 ranked trainer-seasons, yet is on course to challenge O’Brien’s record 64 wins does not seem consistent. But, statistically speaking, it is easier for Brown to rack up wins than it was for the Ballydoyle legend in 2017: in 2017, O’Brien’s runners faced 9.25 rivals on average and produced a median Racing Post Rating (RPR) of 106, whereas this year Brown’s have been opposed by just 7.13 and run to a median of 100.

O’Brien’s 2017 season is far and away the greatest by a trainer since our data commenced in 2011. In the rankings of November 5, 2017, O’Brien’s TRC Performance Index was an amazing 1104. That may never be beaten.