Hall of Fame trainer Mark Casse will saddle a trio of starters in Saturday’s $1-million Queen’s Plate including Telekinesis, Wonder Gadot and Neepawa.

Telekinesis, the Winterbook favourite for the 1¼-mile Canadian classic, was bred by William D. Graham and purchased for $470,000 as a weanling at the 2015 Keeneland November Breeding Stock Sale. The Ghostzapper-Intentional Cry colt’s maternal grand dam is Gold Mover, a six-time Graded stakes winner.

“He just was faster than everybody else,” recalled Casse. “He’s an extremely beautiful horse, well made. He was an expensive weanling. As a weanling, I was the underbidder on him for another client and Stonestreet bought him and of course I went to Barbara and John Monaham [Stonestreet] and said I would really like to train him and we got him.

“So, he’s been on our radar since he was very young. He was just always right at the top of the class as a young horse. We have a lot of good young horses so it’s a good class and, when you can beat the head of that class, that says something.” 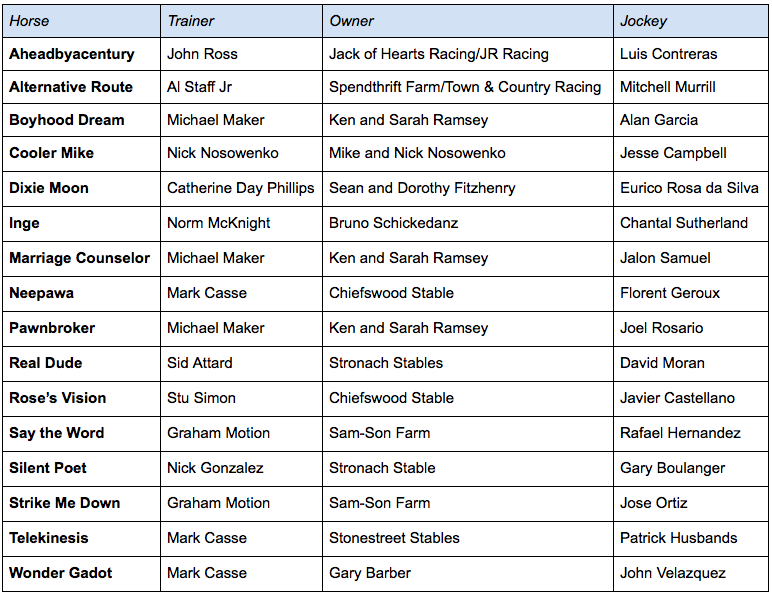 Named after the blockbuster movie Wonder Woman and leading lady Gal Gadot, Gary Barber’s filly Wonder Gadot has already established herself as a star, earning accolades as Canada’s Champion Two-Year-Old Filly. She was purchased at the Ocala Two-Year-Olds In Training Sale for $325,000 and put her star power on display right from the start.

Bred by Anderson Farms, the Medaglia d’Oro-Loving Vindication lassoed a win at Woodbine over seven furlongs on the turf and followed up that performance with a close third in the G3 Natalma. She then dominated the G3 Mazarine in her first Tapeta try over 8½ furlongs before heading to the Breeders’ Cup, where she finished sixth. Before her juvenile campaign was complete, she added the G2 Demoiselle Stakes to her résumé at Aqueduct.

This year, Wonder Gadot has hit the board in all six of her stakes, including recent runner-up performances in the G1 Longines Kentucky Oaks and the Woodbine Oaks Presented by Budweiser – both narrow losses – earning her flashy Beyer Speed Figures of 96 and 88, respectively.

“I thought she was really unlucky, but she can cause some of her bad luck,” said trainer Mark Casse. “Her Kentucky Oaks performance was just tremendous. She hopped at the start in the Canadian Oaks, was a little wide, but still had every shot to win so I was a little disappointed in her.

“We are going to add blinkers for this next start to see if we can get her to focus a little better, not so much focus, but she tends to want to hang a little when she’s coming down to the wire and we’re hoping that maybe with blinkers she’ll keep on running.”

Neepawa was winless in four starts as a 2-year-old, but showed promise finishing second in his season finale in the Coronation Futurity behind Queen’s Plate contender Aheadbyacentury on the Tapeta at Woodbine. The colt, like fine wine, has gotten better with age.

“He’s by Scat Daddy,” said Casse. “He’s a horse that we’ve always kind of felt like would get better. Most of the Chiefswood horses are bred to run on and get better as they get older, and we’ve kind of felt that would be the case with him and he has. He’s really, especially in the last couple months, started training better and getting bigger and stronger. I know a mile and a quarter will not be an issue for him.”