Racing fans that pulled the Kentucky Derby/Preakness infield double were treated on both days to stupendously beautiful weather, a range of high- and low-end hospitality offerings (and behavior), and terrific racing. Preakness infield denizens were treated to concerts by Lorde and a handful of other musical acts, but if the Churchill Downs infield crowd didn’t have a Grammy-winning singer to entertain them, they did have something the fans at Pimlico didn’t: a great view of the races.

Customers at this year’s Kentucky Derby—and not just those in the infield, but those with a seat pretty much anywhere at Churchill Downs—had an unprecedented view of the action, thanks to the $12 million screen installed by Panasonic earlier this year. Most racetracks boast an infield screen that shows the races live, but resolution is often low-tech and views are pretty much limited to those in the clubhouse or grandstand right across from the screen’s location. Those screens resemble the board at Churchill Downs like a Matchbox toy car resembles a Maserati.

“It’s his vision,” Asher said. “We looked at some of the other screens around the country, big video boards. I was on one of those trips, down to Dallas to AT&T Stadium, and we were amazed by that one.”

“Ryan Jordan, our general manager, made several trips to NASCAR facilities and other facilities that had these big boards in operation, and the more we looked at it, the more we talked about it, the more we felt strongly that this would be immensely popular project and that it would significantly improve the experience here of a huge number of people on our track’s biggest days.”

One of those scouting trips was to the Charlotte Motor Speedway, at which Panasonic installed a 200-by-80-foot screen in 2011.

“That was our first giant screen,” said Jim Doyle, president of Panasonic Eco Solutions North America. “We set up in a car and drove around to various spots within the racetrack, which is much, much larger than Churchill Downs, and we said, ‘This is what the view would look like of your board if you were sitting in Millionaire’s Row,’ for example. ‘This is what the board would look like from dead-center infield.’

“I think the key that came out of that was they could really viscerally feel and see what their fans were going to get, and I think that was the deciding factor.” 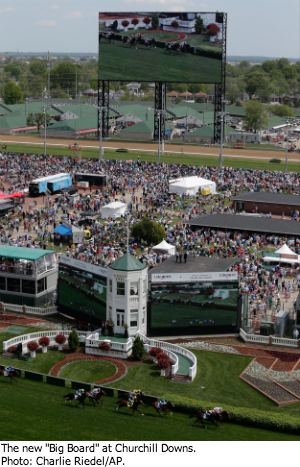 Built to withstand 90 mph winds in a location that was ravaged by tornados in 2011 — a tornado actually touched down on the Churchill backside — the “Big Board” is 171 feet wide and 90 feet tall, standing 80 to 170 feet above the Churchill Downs infield and constructed on the backstretch. Visible from well outside the racetrack, the screen apparently poses no distractions to horses or riders. It debuted on April 26 to generally positive reviews on social media, but neither Churchill’s press nor the public’s comments were adequate preparation for seeing the board in person.

Turf sires not including Britain and Ireland

According to TRC Global Rankings algorithm. Includes all runs by Group or Graded races worldwide (apart from in Britain and Ireland) in the last three years

Anyone who has spent any time in a sports venue within the last decade is used to a screaming, flashing screen that displays scores, live action, stats, replays, and entertainment. Forget that. Those screens do nothing to prepare viewers for the sheer size and quality of the images on the board at Churchill, the presence of which transforms the experience of being at the racetrack, whether you’re in the cheap seats or the best ones.

Experienced racegoers accept the fact that for most of the race, they’re not going to have a good view of the action on the track. The installation of hundreds of televisions at tracks, the development of high-definition, and the advent of Trakus have all helped, but the inevitable disappointment of the novice racegoer once the horses leave the gate—“Where’s my horse?”—represents a barrier to the experience of being at the racetrack. A common refrain from people new to the races is: “Why go to the track if I have to watch the horses on television anyway?”

While the Panasonic board may not entirely answer that last question, it is nonetheless a game-changer. The quality of its 4K ultra-high-definition screen and its enormity offer a crystal-clear image of what is happening on the track, offering even the most veteran racegoers an unprecedented view of the race.

Still, some elements of the production jarred. Track habitués are accustomed to certain information on the screen that was obviously and startlingly missing. Absent was the usual horizontal row of color-coded silks or saddle towels accompanying post position numbers that indicates the running order during the race. Instead, a vertical line on the left side of the screen showed the horses’ order, with the number at the top representing the horse on the lead. Sectional times were not displayed, nor were odds or horses’ names. Visually, the images were stunning, but the presentation surprisingly lacked information fundamental to the race-going experience.

As common as big boards are in sporting venues as are the complaints about the sensory onslaught they provide. Attend a hockey or basketball game and prepare to be bombarded with an incessant barrage of trivia questions, player biographies, statistics, and advertisements. Traditionally, horse racing is a quieter experience. Though not devoid of such inclinations, tracks haven’t necessarily sought customers’ attention constantly during the 30 minutes between races.

The big board does. You can’t pay $12 million for something and expect it to sit dark for even a few moments, so this year’s Kentucky Derby felt more akin to attending one of those mainstream sporting events than it might have in years past; add a big board, and you add the atmosphere of an arena. That could be a good thing: The board offered information about Kentucky Derby runners throughout the day, and used judiciously, it could be both a handicapping tool and an educational medium. It could also become exactly the sort of invasive, mind-numbing intrusion that has unfortunately become de rigueur at major sporting events.

“As long as it’s done in a tasteful way and doesn’t distract from the pageantry and history of such an amazing event, like some kind of a Vegas sideshow, and I think they did a pretty good job this time around, then I think it adds to the experience in a very meaningful way,” said Panasonic’s Doyle.

He also said that Churchill can customize what is on the screen for its audience, something Asher indicated that the track would study going forward.

“We’ve brought in [a company] whose mission is to come up with programming and to help organizations maximize the possibilities of this wonderful piece of technology,” he said. “The presentation will definitely be tweaked. This was a learning experience for us, and we want to find the perfect mix to satisfy the people who are here to play the races and help those who just want to have a lovely day around great horses.

“We want people to see the horses during the race and prior to the race, and we’ll find unique ways to give out wagering information and other information about the sport up there.”

While information about wagering specifically from the infield was not available, both Asher and Doyle said that they expected that the presence of the screen has the potential to increase handle from infield patrons, who before this year could easily spend eight hours at the track and never see a race. Asher said that he expects that analysis of infield wagering figures will be conducted “down the road,” and Doyle pointed out that the board offers advertising and sponsorship opportunities as a way to build additional revenue streams.

“We didn’t make this investment to hold still,” Asher acknowledged. “When you make an investment like that, you’re looking to move forward. Twelve million dollars for a company our size is a significant investment.”

And one out of the reach for pretty much every other racetrack in the United States. Even though Doyle said that smaller screens with comparable technology could be constructed for less money, it’s difficult at this point to imagine racetracks making such an investment, particularly at a time when handle is falling and infrastructure upgrades, technological and otherwise, are in short supply. Still, Doyle said that Panasonic is in discussion with several other tracks, though he declined to name them.

In American racing, the Kentucky Derby is sui generis in its size, scope, and significance. It stands to reason that it is now accompanied by an unprecedented visual experience. The board’s installation at Churchill seems, at this point, to be an unqualified success, one that will not end on Derby weekend, Doyle hopes.

“This can truly change racing forever.”