Since the turn of the century, it’s produced the winners of three Arcs, three Irish Champion Stakes, two Juddmonte Internationals and one each of the Dubai World Cup, the Irish Derby, the Prix du Jockey Club, the Eclipse Stakes and the Irish St Leger.

But it is as a trial for the Epsom Derby itself that tomorrow’s Betfred Dante Stakes has really stood out. Five winners of that great classic have come out of York’s £165,000 Group 2 in those same 18 years. It is a record no other European trial can come close to matching.

So the picture for the Derby is never clear until the Dante has been run, and this year will be no exception, even though we already have an odds-on favourite for the race on June 2. Further down this page, TRC race analyst James Willoughby takes a look at the main Derby trials so far and gives his idea of the pecking order for Epsom pre-Dante.

Does Gosden hold the key?

Two of the world’s great trainers according to TRC Global Rankings, Aidan O’Brien and John Gosden, each have two runners tomorrow, with Gosden perhaps holding the key with his pair Roaring Lion and Crossed Baton, who has already won the listed Blue Riband Trial at Epsom. Dante favourite Roaring Lion was an encouraging fifth in the 2000 Guineas just 12 days ago, and his showing in tomorrow’s 10½-furlong test will help provide comparison with Guineas hero Saxon Warrior, the aforementioned odds-on Derby favourite.

Gosden has won the Dante three times before, and O’Brien four. The other trainers with runners tomorrow to have scored in the race previously are Mark Johnston and David Elsworth (once each).

The only jockeys riding this time to have won the Dante are Ryan Moore (3), Frankie Dettori (2) and William Buick (2). Two sires with runners tomorrow have produced Dante winners before: Galileo (Cape Blanco in 2010) and Teofilo (Permian last year). 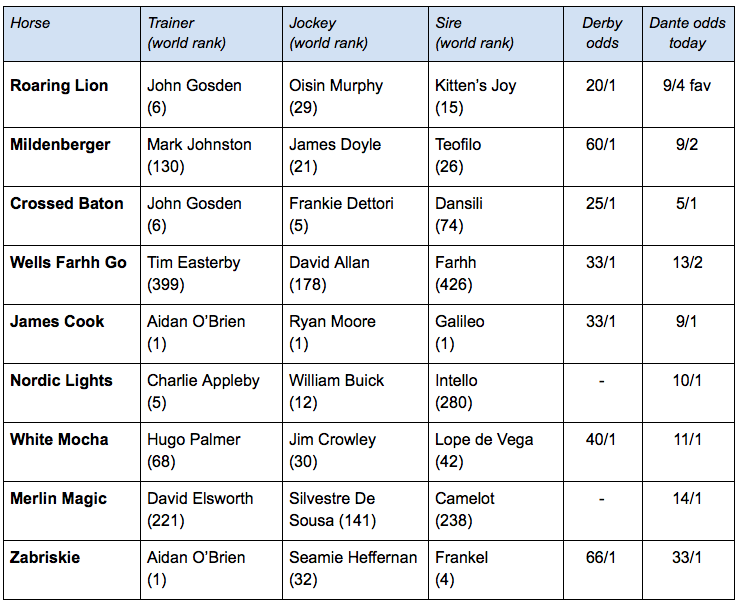 Most of the major trials are now in the book, and only the Dante and possibly the Irish 2000 Guineas at the Curragh at week on Saturday can disturb the picture. But what is that picture? Here James Willoughby analyses what has happened so far, and gives his idea of the current pecking order.

Analysis: At halfway, Saxon Warrior (Deep Impact), who moves like a dirt horse, was cantering behind the lead. Inside the two-furlong pole, Roaring Lion made a strong move to his blindside and took the lead, but the winner responded like a champion, just taking a while to organise his stride on the easy surface, then opening out in tremendous style to win narrowly, yet very decisively. When a horse gilds his talent with such a will to win, he will always be hard to beat.

Roaring Lion (Kitten’s Joy) ran a big race and briefly looked to have the winner in trouble, but he hung left when first put to maximum effort, then again when the winner stretched him beyond breaking point.

The Pentagon (Galileo) was in trouble a good way out but kept going. He lacks anything like the explosion of the first two, but, out of a mare by Unfuwain, he will come into his own given a good test of stamina.

Analysis: Saxon Warrior (Deep Impact) again travelled well and set his seal on the race by overwhelming his opponents between the two-furlong and one-furlong poles. This is a colt with an array of weapons, having a top-notch cruising speed, the turn of foot to separate himself, the stamina to operate over longer distances and, notably, the kind of pack-dominating tenacity that will ensure he makes the most of his physical gifts. He has outstanding claims in the Derby.

Masar (New Approach) was a nine-length winner of the Group 3 Craven Stakes in preparation for this. He met much stronger rivals here and earned the same RPR but left the impression he can do better. He raced more towards the stands’ side of the track than the two who beat him, and never had the chance to execute the forcing tactics that suit him.

By the 2008 Derby winner out of a mare from the family of Sea The Stars and Galileo, he has a good shot to stay a mile and a half, but he may run in the Irish 2000 Guineas six days before Epsom.

Roaring Lion (Kitten’s Joy) ran better than when trounced by Masar in the Craven Stakes, keeping on late towards the stands’ side. He may do better over further, as his pedigree suggests, but his two runs as a 3-year-old have been a serious let down off the back of his juvenile form.

Analysis: A five-length winner of a Newbury maiden on his second start, Young Rascal (Intello) stays really well and continued his progress with a battling win. He was twice checked in his run and had limited time to respond, so he deserves a ton of credit for being able to get up close home.

Owned by Bernard Kantor, managing director of the Derby sponsors, he is certain to take his chance at Epsom and has a good, solid each-way chance.

Had the first two been similarly unexposed, many would fancy Dee Ex Bee (Farhh) to turn the form round next time. Breaking from a wide gate, he had a brutal trip, making good headway while running wide on the home turn, forced even wider by traffic problems. He undoubtedly covered far more ground than the distance by which he was beaten, but this was his seventh start and he has lost five times now.

From the family of Dubai Millennium, he stays a mile and a half very well and was not losing an inch on the winner after the was passed.

Hunting Horn (Camelot) started favourite but is not one of trainer Aidan O’Brien’s stars just yet. He was left behind in the final furlong and has now lost four of his five starts.

Analysis: In terms of merit, this race profiles similarly to the Chester Vase. Hazapour (Shamardal) started at 16/1 and upset three fancied O’Brien runners, including sixth-placed Nelson, who had defeated Delano Roosevelt on their previous start in the Group 3 Ballysax Stakes.

There was no fluke about it, however, and the Aga Khan’s colt – related to 2016 Derby winner Harzand – has clearly made good progress from his 2-year-old days, which saw him rated less than RPR 100 after three tries. Hazapour made a good move to take command of this and could reach a place in the Derby, given that he should stay a mile and a half well.

Stamina is the long suit of runner-up Delano Roosevelt (Galileo). He is a big colt and still looks on the weak side, but he came home well here without threatening to reach the winner, cutting the margin to under a length. It’s likely he will be also running on at Epsom, but he seems to lack mid-race gears and acceleration.

The Pentagon (Galileo) gave a good account of himself but did not finish the race off as strongly as he should, given his pedigree. This was a shade disappointing and he hasn’t yet made the improvement over middle distances anticipated by his Racing Post Trophy run.

Analysis: The assessment of performances should be independent of the identity of the winning connections, yet Knight To Behold (Sea The Stars) could have been reviewed even more enthusiastically had he been dispatched by a fashionable, powerhouse training yard, rather than that of the capable Harry Dunlop.

Make no mistake, this colt was seriously impressive. Moreover, he has the pedigree of a Derby winner too, being by the 2009 winner out of a sister to the 2004 third, Let The Lion Roar.

Rather free early, his rider, Richard Kingscote, let him stride on well before halfway, from which point he put on a show. When Kew Gardens tried to tackle him in the straight, Knight To Behold simply found more and ran on in great style.

As far as Epsom goes, the trouble is that he isn’t a rounded competitor yet, and his early exuberance will have to be curtailed. Can he put it all together and move forward again?

Kew Gardens (Galileo) was an impressive winner of the listed Zetland Stakes on the last of five starts as a juvenile. This effort was more in line with that form than a previous tame third in a listed race at Newmarket, but he has clearly fallen a good way short of Derby standard.

Nevertheless, he is likely to take his chance there, not least because he has made the running in the past.

Corelli (Point Of Entry) was talked of as a Derby outsider after a fluent Yarmouth win, but carried only RPR 92 into this and could not cope. He is an embryo long-distance colt.

Analysis: Sevenna Star (Redoute’s Choice) produced a resolute display to get home in a desperately close finish. He threw it down to the second two furlongs out and kept on strongly up the hill.

The winner of a Windsor novice event on heavy going earlier the same month, he had wind surgery after his 2-year-old season which has clearly worked. He will need a fair bit more to be a threat to all at Epsom, however.