David and Patricia Thompson have won on racing’s biggest stages, including Classics and the Breeders’ Cup, since they bought Cheveley Park Stud near Newmarket in 1975. But last month’s Grade 1 double at the Cheltenham Festival was right up there with the best of those mighty achievements.

Cheltenham had been special enough for them in 2019, when, in a first season of significantly increased involvement in jumps racing, they had five runners and enjoyed a G1 win from Envoi Allen in the Weatherbys Champion Bumper just 24 hours after A Plus Tard had run out an impressive winner of the Close Brothers Novices' Handicap Chase.

Incredibly, the 2020 Festival was even better. Envoi Allen had been recognised as one of the best-ever winners of the Weatherbys Champion Bumper and was one of the bankers of the week for many, so it was no great surprise when he stretched his unbeaten run to nine in the Ballymore Novices’ Hurdle on day two.

However, few had expected the Cheveley Park Stud to prevail once again in the Weatherbys Champion Bumper, for Ferny Hollow came in under the radar while all of the talk was of his short-priced stablemate Appreciate It.

Ferny Hollow looked every bit as good as Envoi Allen had 12 months earlier - the Racing Post rated his win 6lb higher - and for good measure the second-day double was complemented by G1 thirds from the Thompsons’ only other runners of the week, Allaho in the RSA Chase and A Plus Tard in the Ryanair Chase.

What turned out to be the last major hurrah of the season could not have gone much better for the stud.

Managing director Chris Richardson confirmed, “Those Cheltenham winners gave the Thompsons a huge thrill. They’ve had magical moments on the flat, including in Classics and at the Breeders’ Cup, and they’ve had a Grand National winner in Mrs Thompson’s colours (Party Politics in 1992), but winners at Cheltenham are relished and appreciated just as much. You could see that from the look on Mrs Thompson’s face as she led the winners in.

“We are very spoiled in having lots of runners at Royal Ascot, but the Cheltenham Festival is something else. It's a different atmosphere, and fans build a bond with the runners there through following them from year to year.”

The Cheveley Park Stud currently has around 450 horses on its books, including mares, foals, yearlings and stallions - of which there are five this year, including Ulysses, Twilight Son and of course the home-bred Pivotal, now 27, whose latest star is Addeyyb, the William Haggas-trained G1 Queen Elizabeth Stakes winner at Randwick on Saturday.

Only 18 of the stud’s horses in training are jumpers, compared to 120 on the flat, yet they picked up five G1s in the winter to complement last summer’s G1 win by Veracious in Newmarket’s prestigious Tattersalls Falmouth Stakes.

A typically strong team for when flat racing resumes includes high-class 3-year-olds Threat and Dark Lady, last year’s Coral-Eclipse third Regal Reality and a host of impeccably bred youngsters, but there is much more of a commitment now to jumpers, driven by David Thompson. 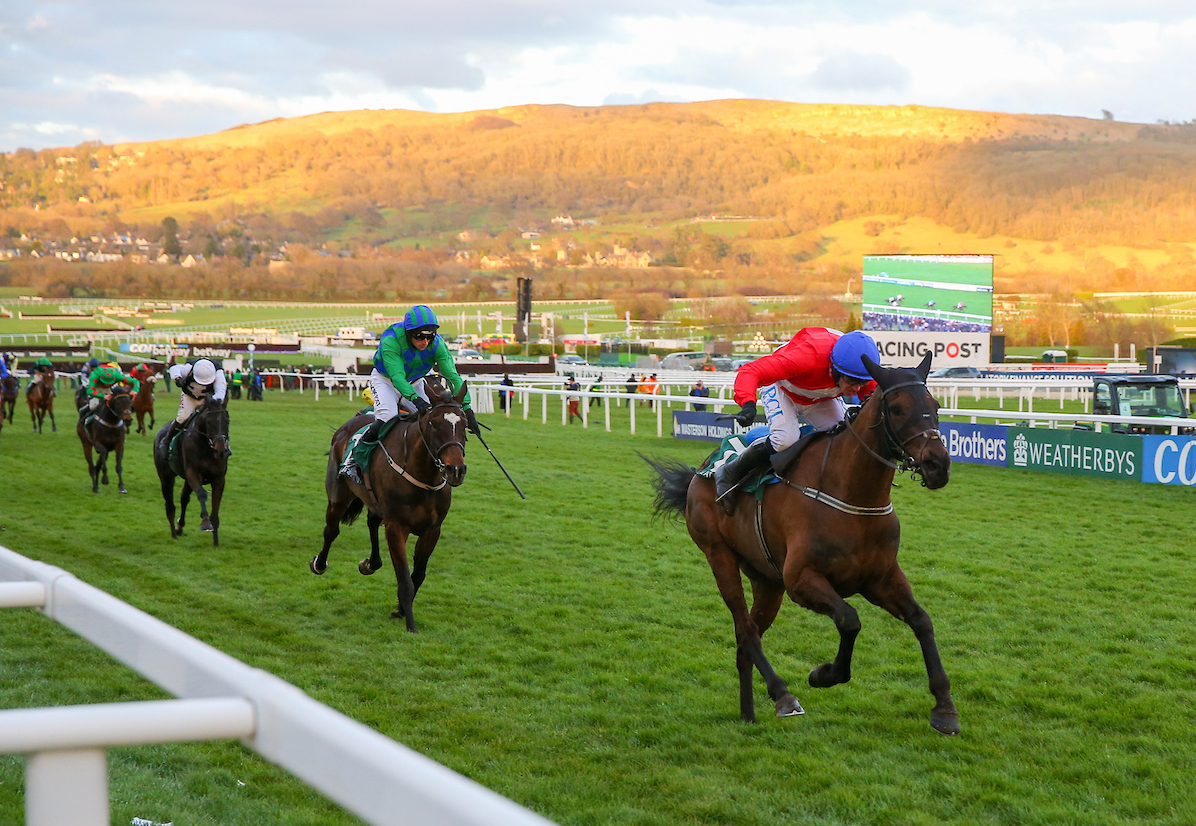 They are noticed much more too now that they carry the stud’s red, white and blue rather than Mrs Thompson’s own pink and purple. Although Britain’s best stables have not gone unsupported, it will not have gone unnoticed that the best of them are in the hands of Ireland’s elite trainers.

Richardson said, “We’ve had a number of jumpers trained in England, and Colin Tizzard saddled bumper winner Rose Of Arcadia at Taunton for us in Cheltenham week, but it’s just happened that most of the best ones have ended up in Ireland.”

There were two reasons for the greater involvement over jumps, as Richardson explains: “David Thompson has always enjoyed racing under both codes, but, while he is mentally as sharp as a tack, he is now of an age where he finds it difficult to get around and so he is very happy watching from home on the television.

“I think he was getting a bit bored. He took the view that this would be another angle for him to enjoy in the winter months, and that if they carried the stud’s colours they would be easier for him to pick out.”

He added: “I bathe in reflected glory, as while I oversee the operation I haven’t had a lot to do with it. I’m delighted that it’s given Mr and Mrs Thompson such a thrill.

“It’s been an amazing success for them, but they were very well advised and they put plenty of money into it. The whole family, including their son Richard, are getting plenty out of it and they are embracing the whole sport.”

Reflecting again on Cheltenham, following news that jumps racing will not resume now until July 1 at the earliest, Richardson said, “Ferny Hollow was very impressive in the Weatherbys Champion Bumper, given a great ride by Paul Townend. We knew he was one of those horses who just wanted be dropped out, switched off and kidded along, and he couldn’t have won more impressively in the circumstances. He’s a beautiful horse and Willie [Mullins] has always rated him very highly.

“Envoi Allen is quite an intelligent horse and he only does enough. He looks after himself and keeps impressing. On the other hand Ferny Hollow has had to be cajoled somewhat, but he is mentally much sharper now and he’s only five and so there’s still plenty to come.”

He added, “We have to pinch ourselves at having two horses of that calibre, not to mention A Plus Tard, Allaho and the others. Owners dream of just having a runner at Cheltenham, so for a relatively small jumps operation like ours - we are not like ‘JP’ or Gigginstown - to have two winners, two years running, has been very exciting.

“On the Flat we dream of having an Enable or a Stradivarius, and people are talking of Envoi Allen in the same sort of terms. He has already acquired a huge following, and he’s only six, so there should be lots to look forward to. Ferny Hollow might be of similar calibre.”

When racing over jumps hopefully gets back into full swing again in the autumn, the Cheveley Park Stud’s scouts will be scouring the point-to-point and bumper fields with a third successive win in the Weatherbys Champion Bumper high on the wish list.

Richardson said: “Weatherbys have been absolutely brilliant and their sponsorship is hugely appreciated. We very much appreciate the support that they give racing in general, and the Champion Bumper is an obvious target for the younger horses that the Thompsons buy. Hopefully we will be back with another nice young horse next year.”

In all probability, the winner of the 2021 Weatherbys Champion Bumper has yet to be seen in public, and might still be unnamed.

That said, you won’t get long odds about them carrying the red, white and blue of the Cheveley Park Stud.