British champion jockey Jim Crowley may have been firing in the winners over the past 12 months, but his position in the TRC Global Rankings hasn’t really reflected the historic prestige of that title. That situation, however, looks sure to change in 2017.

The 38-year-old’s relatively lowly position in the world jockeys’ standings (he was 135th just over a week ago) merely mirrors the level of opportunity he has had to ride in top-level races. You don’t score any points at all for non-Group or Graded races, so it doesn’t matter how many other winners you ride, it won’t show up in the standings.

The former jump jockey has been a fine rider on the flat for several years now, but widespread appreciation of his ability only really developed during his run for the championship last season, in particular during a spectacular September, when he rode a British record 46 winners, which virtually clinched the title.

And that, of course, was the springboard to the job he now has - first jockey to Sheikh Hamdan Al Maktoum, a role that guarantees competition at the highest level throughout the European flat season. Sheikh Hamdan’s Shadwell operation lies fifth in the global owners’ standings.

How Dettori strengthened his position

The first signs of Crowley’s new status came at Meydan last Thursday, when he scored two G2 victories at the Dubai Carnival for Godolphin and trainer Saeed Bin Suroor. Godolphin took five of the six races on the card.

The double gives Crowley an eight-point gain in the jockeys’ standings, lifting him to #110. That’s still some way short of where you’d expect to see a British champion jockey (even now he is only 16th in the TRC list of British riders) but you can expect some more sizeable moves from him soon.

Bin Suroor himself is a three-point gainer, moving up one place to #13 in the trainers’ standings, edging back ahead of his Godolphin colleague Charlie Appleby.

One former British champion whose position in the rankings is an excellent indication of his worldwide standing is Frankie Dettori. The Italian was in fine form in South Africa on Saturday, when he won the G1 Investec Cape Derby at Kenilworth on the country’s richest raceday, which featured four G1s. Dettori gains two points, strengthening his hold on the world #3 slot, but the real star of the day was trainer Brett Crawford.

The 42-year-old Cape Town conditioner not only sent out Dettori’s winner, Edict Of Nantes, but also Whisky Baron, who took the richest race of the lot, the G1 Sun Met celebrated with Mumm Champagne (formerly the J&B Met).

That gives Crawford a massive 17-point gain on the week, which fires him from 148th in the trainers’ standings all the way up to 85th, and sends him from sixth to second in the South African rankings.

Many of the biggest climbers across the newly updated rankings progressed because of success at Kenilworth - in South Africa only G1 races count towards the TRC Global Rankings, so because of their rarity value they tend to have a significant impact. Whisky Baron’s rider, Greg Cheyne, for instance, gains a whopping 13 points to move up from #455 to #223. 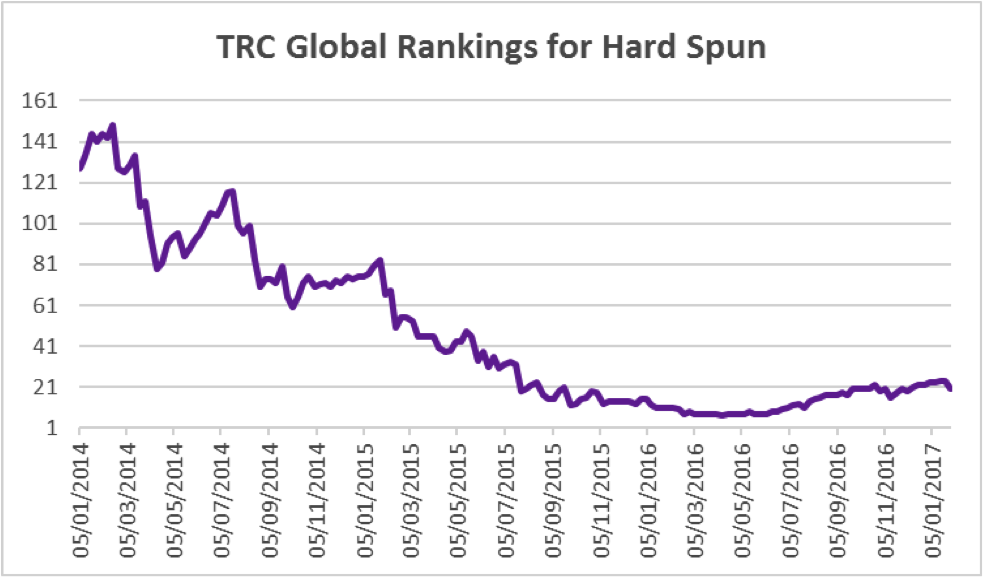 Back to Meydan, though, for another significant climber - the stallion Hard Spun, who gains four points to rise four places to #20 in the sires’ rankings on the back of two victories last week.

The 13-year-old son of Danzig sired one of Crowley’s G2 winners, Promising Run, as well as the Gulfstream Park G3 scorer Taghleeb.

As the graph of his trajectory in the TRC Global Rankings shows, Hard Spun, who stands at Darley’s Jonabell Farm in Kentucky, has made impressive progress up the standings during the last three years.