The international part of the Breeders’ Cup Challenge is now complete. Thirty two races in ten different countries on every continent have been run since the first week of January with the winners guaranteed automatic places at Del Mar for the Breeders’ Cup World Championships on November 3 and 4.

Places in eight Breeders’ Cup events have been up for grabs - six on turf and just two, the Classic and the Longines Distaff, on dirt (with one qualifying race for each - in Japan and Argentina respectively).

A complete breakdown of the winners of all 32 races is presented below, arranged Breeders’ Cup race by Breeders’ Cup race. We have included the trainer and sire of each winner with their world ranking positions in brackets after their names, and also the best Racing Post Rating (RPR) the runners have achieved in their careers to date.

The final race in the international series, the G1 Longines Prix de L’Opera, was won by the Aidan O’Brien-trained Rhododendron on Arc day at Chantilly on Sunday. The Galileo filly, who edged out stablemate Hydrangea (also by Galileo), is expected to take up her slot in the Breeders’ Cup Filly & Mare Turf if things go well in the meantime. Hydrangea is a possible for the same race too - she qualified by winning the G1 Matron Stakes at Leopardstown last month.

It will surprise no-one to learn that O’Brien won more international ‘Win and You’re In’ qualifiers than any other trainer - six . John Gosden, with four, was the only other conditioner to take more than one. Between them, O’Brien and Gosden won 55 percent of the European races.

Top stallion, of course, was Galileo, also responsible for six winners, four of them trained by O’Brien. The only other stallion with more than one was his son, Nathaniel, sire of Arc winner Enable, who won two of the ‘Win and You’re In’ races, the G1 King George at Ascot in July and the G1 Yorkshire Oaks at York a few weeks later. The Juddmonte-owned filly is now finished for the season and will not be going to Del Mar, although she may return to training in 2018.

Two of Gosden’s four were won by Enable, and O’Brien also had a horse take two, the 2-year-old filly Happily, who is a possible for the Breeders’ Cup Juvenile Fillies Turf, which she qualified for by winning the G1 Moyglare Stud Stakes at the Curragh last month. In her second victory, in Sunday’s G1 Prix Jean-Luc Lagardere at Chantilly, she beat the colts and would therefore be entitled to take them on again at Del Mar in the Juvenile Turf should connections wish.

Gosden’s other two winners both came in 2-year-old races at the weekend - the Dark Angel filly Juliet Capulet, who took the G2 Rockfel Stakes at Newmarket on Friday, and the Kitten’s Joy colt Roaring Lion, who landed the G2 Royal Lodge at the same track on Saturday.

The other international Breeders’ Cup qualifier at the weekend was Sunday’s G1 Prix Marcel Boussac, won by the Charlie Appleby-trained Dubawi filly Wild Illusion. It is not thought she is likely to take her place in the Juvenile Fillies Turf at Del Mar.

As you can see from the charts below, no more than six or seven of the winners are likely to take up their places in California. But don’t think for a second that means the challenge series has not been a success. On the contrary, it has kept the Breeders’ Cup narrative bubbling along nicely just below the surface all year.

On top of the 32 international qualifiers, 49 ‘Win and You’re In’ races will have been run in North America this year. The final 14 take place over the next seven days. 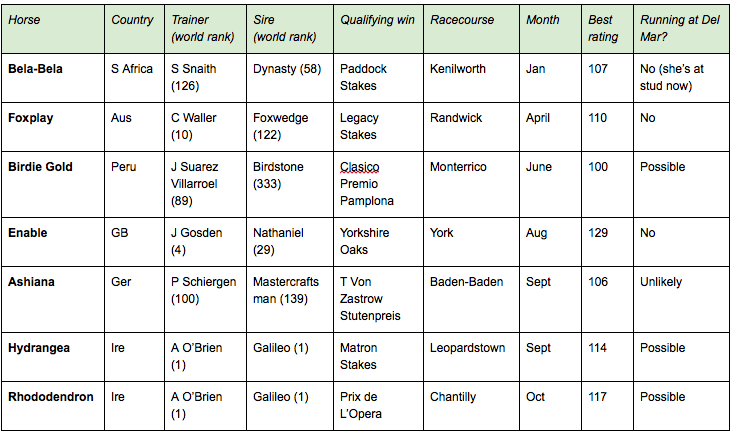 BC Turf Sprint: the international qualifiers

BC Longines Turf: the international qualifiers 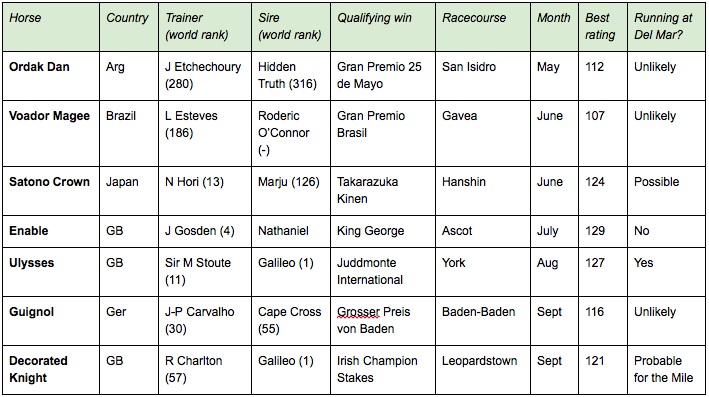 BC Juvenile: the international qualifiers

BC Classic: the international qualifiers

BC Distaff: the international qualifiers