In May 2014, TRC published an article headlined Key wagering indicators spell trouble for US, British racing, an analysis of betting and prize money in 2012 for the major racing jurisdictions: Australia, France, Great Britain, Hong Kong, Japan and the United States.

Britain finished at the bottom in all wagering and related prize money comparisons. It had the third highest betting turnover per race - €1.9 million - and the lowest prize money by far, at €12,900 per race. In total wagering, Britain was second with €11.6 billion, behind only Japan. However, it badly trailed the other five jurisdictions with total prize money or purses at a meager 0.6 percent of total wagering.

The terrifying fact is that these numbers have only gotten worse since 2012.

Legally, U.K. bookmakers are required to pay 10.75 percent of their gross margin from wagering to the Levy Board, much of which is for payment towards purses. However, most of the bookmakers have moved their internet and phone account businesses to offshore locations such as Gibraltar, the Isle of Man or the Channel Island of Alderney, where Britain has no taxing authority. 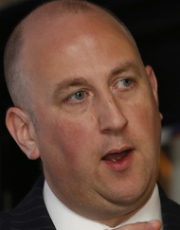 British Horseracing Authority Chief Executive Nick Rust (pictured) recently said that 40 percent of all betting on British racing is not being taxed. Only three bookmakers - Betfair, 32 Red and bet365 - are making voluntary payments to the sport for their offshore operations. The vast majority of bookmakers are taking bets on British racing through their offshore account wagering operations with no direct tax payments to the industry.

The bookmakers argue that they are adequately compensating the racing industry. However, the comparative figures cited above tell a very different story.

In 2014, bookmakers paid £75 million to the Levy Board for purses, £175 million to the industry for media rights (a license to show all British races live in the betting shops) and an additional £12 million to racecourses for race sponsorships.

Little incentive for the industry to modernize

In fairness to bookmakers, the current funding mechanisms for prize money do not properly encourage the racing industry to undertake serious adjustments to their fixtures to increase field sizes, which would directly increase wagering.

However, since racing gets such a small portion of the wagering from the bookmakers through an indirect financial calculation controlled by the bookies, there is little incentive for the industry to change and modernize the selection and presentation of racing cards. If the U.K. were operating in a pari-mutuel betting pool environment, the interests of the bet taker, the racecourse and purse account would be aligned to maximize betting on each race.

To make matters worse, the bookmakers are now paying significantly more for the media rights to show the races live in the shops than they are paying on their betting activity. Therefore, one could argue that the racing industry is inappropriately compensated for the number of races run without regard for the amount of betting on these races.

There was an initiative from the four major bookmakers and the industry, announced in the fall of 2013, called the Additional Voluntary Contribution (AVC) Fund. Under the terms of the AVC, the four largest retail bookmakers, William Hill, Ladbrokes, Coral and Betfred, agreed to make a combined annual payment of £4.5 million for a four-year period.

Offshore operations save the bookmakers £30m

Keep in mind that the BHA estimates the bookmakers are saving a minimum of £30 million annually by not paying the Levy on their offshore operations.

This incentive fund was to be overseen by the Levy Board and was designed to encourage more competitive racing. The assumption was that the fund would generate more Levy revenue (and, by the way, more profits for the bookmakers). Although the deal called for the funds to be paid during the calendar year, 2014, it took a year for the group to agree on the details. The program and payments did not begin until December 2014.

During 2015, there was much discussion about replacing the Levy Board mechanism with legislation commonly referred to as a “racing right”. Chancellor George Osborne in his Budget speech in March, said: “In the week after Cheltenham, we support the British racing industry by introducing a new horse racing betting right.”

In theory, the current indirect payment structure to racing from the bookmaker would be replaced by a stipulated statutory mechanism. Of course, these discussions are nothing new - the abolition of the Levy Board and a “new” racing right has been discussed many times over many years.

As an outside observer, while the Levy payment process is convoluted mechanism that does not serve the industry well, the current Levy Board operation appears to be running well and has been modernized under the direction of Chairman Paul Lee and Chief Executive Alan Delmonte.

Keep in mind that whatever racing right that may be negotiated, the bookmakers in the U.K. have a long history of successfully under-paying racing by any reasonable comparison with any other racing jurisdiction. Any positive shift in payments to racing will encounter strong opposition from the bookmakers, and possibly Government.

With uncertainty in the air, Nick Rust has now made an aggressive move with the support of the racecourses, the owners and the breeders. Late last October, he announced a new funding initiative called the Authorized Betting Partner (ABP).

“Betting operators who have a fair and mutually sustainable funding relationship with the sport will receive the official ABP designation and will be able to fully utilize British racing to promote their own businesses,” according to a statement Rust made.

The message to bookmakers is clear: make a suitable voluntary contribution for your offshore business or you will receive no sponsorship consideration.

The situation is serious, so it was important for Rust to take aggressive action. Racing is losing £30 million a year because offshore bookmaking operations are not paying the Levy.

One reaction by the four largest bookmakers was to discontinue the AVC program after one year of the four-year deal.

It is clear that, without a well structured, legislated racing right, racing needs more economic leverage to combat the aggressive tactics and strong economic position of the bookmakers. I firmly believe that one way to achieve that is to start immediately to plan an industry pari-mutuel account wagering and on-track pool business when the Betfred exclusive pool betting license expires in July 2018.

A great opportunity for British racing 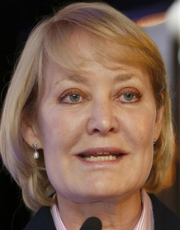 This is not the place to review the history of the sale of the Tote to Betfred in 2011. However, I would encourage you to read the brilliant article, Deafening silence after the Tote sale, by Racehorse Owners Association President Rachel Hood (left) in the August 2011 edition of Owner and Breeder magazine.

It was encouraging to read in the Racing Post on January 23 that Racecourse Media Group chief executive Richard Fitzgerald was exploring how “best to develop pool betting when the current exclusive Tote pool license for betting on horseracing expires in 2018”.

This would be a great opportunity for British racing.

In pari-mutuel betting, all bets of a particular type are placed in a pool for that specific race, or races in the case of a multi-race wager. The takeout, which pays the racecourse, the purse account and government taxes, is removed from the pool right off the top. Pay-out odds are then calculated by sharing the pool among all the winning bets.

The critical difference between pari-mutuel wagering and the fixed-odds bookmaker model is that, when the customer wins a bet, the bookmaker loses. In pari-mutuel betting, the takeout for the racecourse and the industry are paid before the distribution to winning bettors so there is no risk management involved and the pari-mutuel operator has no interest in who wins the race or what the pay-out is.

There are some important strategic advantages for racing in pari-mutuel pool betting. Payments to the racecourse operators and to the purse account are paid first without regard to the outcome of the race. Major pari-mutuel jurisdictions such as the U.S., France and Hong Kong all pay substantially higher percentages to purses than the U.K. bookmakers through this pari-mutuel model.

Pari-mutuel pool betting also allows a much broader array of bet types for the customer. Because the financial success of the bookmakers relies on their ability to risk manage the bets they take, they generally limit their bet types to straight bets (win and place) and a forecast bet, which involves selecting the first finishers.

Customers would be huge beneficiaries

Exotic bets are taken by the current U.K. Tote, but historically the Tote has made up less than 10 percent of on-course wagering. With an industry pari-mutuel pool operation, there is substantial opportunity to increase the volume of exotic wagering by aggressive marketing.

Pari-mutuel pool betting is dependent on developing substantial liquidity in the pools. The new pool betting company would need to be embraced by the entire racing community, and all tracks should be encouraged to participate.

Because the racecourse and the purse account contributions come directly from the takeout, every racecourse would get a set percentage from each bet made on its races through the pari-mutuel pool. Effectively, with the pari-mutuel system, the industry would have a “racing right” in place without even involving the bookmaker. Tracks such as Chester are to be congratulated for their efforts to set up their own betting operation, but this initiative would require broad industry participation.

One of the huge beneficiaries of this new wagering operation would be the betting customer. As noted earlier, when the customer wins, the bookmaker loses. In recent times, we have heard increasingly about betting customers who have been cut off by the bookmaker because they won too often. This could never happen in a pari-mutuel pool environment.

In fact, a customer loyalty program should be a key marketing component to the launch of this business. There are many good examples where good customers can receive rebates and be awarded hospitality credits for their wagering activity. This specific program would also incentivize customers to actually go racing more often.

Racing in Britain is considered to be among the best in the world. It is remarkable that the quality has continued in a country with one of the worst prize money structures. It is difficult to imagine what the state of British racing would be without the substantial contributions from the international powerhouses such as Juddmonte, Darley/Godolphin, Shadwell, Coolmore and the Qatari racing families.

As I noted at the outset, Britain has the third highest wagering per race and the second highest total wagering in the world. The related payments to racing are shameful.

The time is long overdue for the racing industry to receive the proper compensation for its contributions. An entire industry depends on it. If this horse ever leaves the barn, he/she won’t be back anytime soon.