There’s no stopping Mike Smith just now. The 51-year-old Hall of Famer has been one of the best jockeys in the business for a quarter of a century, and on current evidence things are going to stay that way for some time.

Smith’s success was perhaps the most notable feature of the racing action worldwide last week, when he was among the biggest points gainers in the TRC Global Rankings. An incredible FOUR Graded victories at Belmont Park on Saturday added nine points to his total, moving him up to world #6 in the jockeys’ standings.

Three of those wins were for Bob Baffert - Mor Spirit in the G1 Metropolitan Handicap, Abel Tasman in the G1 Acorn Stakes and American Anthem in the G2 Woody Stephens - and Smith was also aboard the magnificent Songbird for trainer Jerry Hollendorfer for her triumph on her reappearance in the G1 Ogden Phipps.

Mor Spirit’s performance (see YouTube video below) was given a Racing Post Rating of 124, the highest of the week anywhere. That’s another notable achievement for the Metropolitan, which produced one of the runs of the year last season, when Frosted’s victory earned him an RPR of 130, one of the highest in the world all year.

THE PERFORMANCE OF THE WEEK

‘Big Money Mike’ and Baffert were virtually unstoppable last week, and, for good measure, they also teamed up for West Coast’s victory in the Easy Goer Stakes on the same card, although that’s a listed race - and they don’t count towards TRC rankings points.

Baffert was a four-point gainer week on week in the trainers’ rankings, which strengthened his status as world #2.

And two of Smith’s wins - Abel Tasman and American Anthem - come under the ownership banner of China Horse Club, whose advance goes on. They gained seven points week on week and are now world-ranked #10 in the owners’ standings. 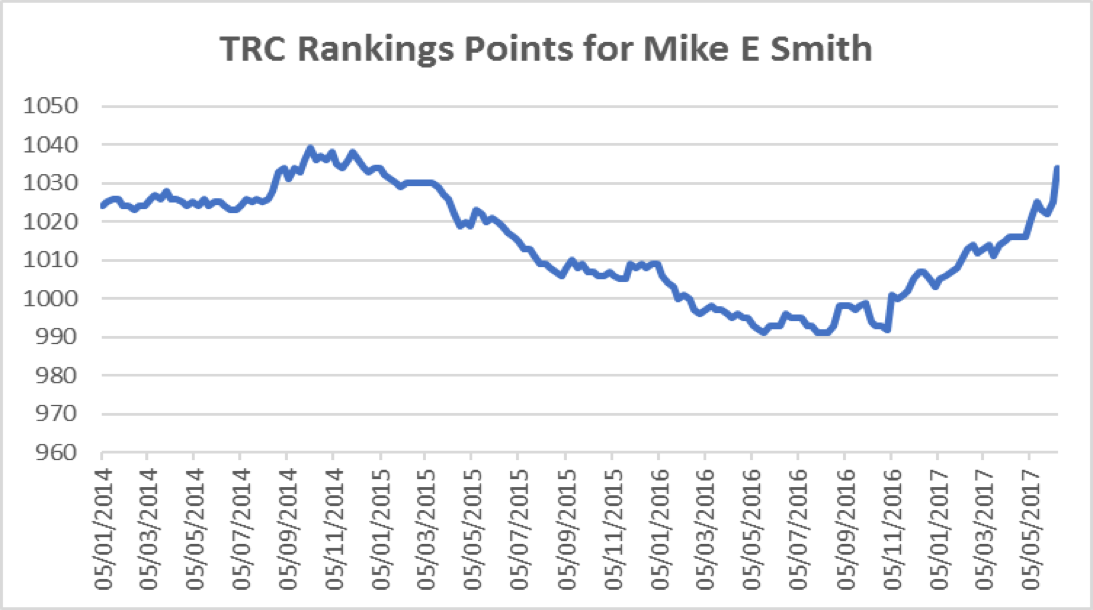 Smith is no stranger to the upper echelons of the table, as the graph alongside indicates. During the period where data is available for the TRC algorithm, he has been as high as third - back in March 2105, when he actually had fewer points than he has now.

His return to the top began in earnest after the Breeders’ Cup last November (three wins, including Arrogate), when he climbed back above 1,000 points for the first time in nine months. That ascendance hasn’t stopped since.

He is currently in a top-ten logjam in the jockeys’ rankings, one of five superb riders within five points of each other in the battle for third place behind the clear top two, Ryan Moore and Hugh Bowman (who himself was in great form on Saturday, taking a G1 and a G2 at Doomben).

Javier Castellano, who has been the leading U.S.-based rider in the standings since they were launched last October, moved to the head of the group of five thanks to three Graded wins last week. But he is now just three points ahead of Smith.

The battle for third place

Meanwhile, Tapwrit’s win in the Belmont Stakes helped push his jockey, Jose Ortiz, up to #13.