While shipping between racing jurisdictions is common practice elsewhere in the world, owners and trainers in the United States tend to travel outside the country far less often. John Scheinman explores the ins and outs of international travel with horses as illustrated by Animal Kingdom’s global campaign in 2013.

Read the third installment of Beyond the local oval: A case study of Animal Kingdom at Royal Ascot

What’s the ideal profile for a promising overseas racing prospect? A highly-talented, laid-back horse that can stand up to a demanding regimen, according to Graham Motion.

The trainer fulfilled many of his racing wishes with just that kind of horse – Animal Kingdom. Motion’s interests, as well the horse’s ability and comportment, aligned perfectly with those of Team Valor principal Barry Irwin, who marched through all setbacks on the horse’s path to international prominence.

“Barry is about being broad-minded, and I’m all about it,” said Motion, who no longer trains for Team Valor. “That’s one of the things I had being with Team Valor. We were going to run Pluck in England [before the horse was injured]; that was exciting to me – getting away from this everyday running at Laurel and Philadelphia. It’s great to have a challenge, and I think we get away from that. It shouldn’t necessarily be about finding the easiest race, wherever it is.”

Irwin said the idea to run Animal Kingdom in the 2012 Dubai World Cup came to him as far back as the day the colt cut a swath through the field to win the Grade 3 Spiral Stakes on artificial ground at Turfway Park – even before he had won the 2011 Kentucky Derby.

When Animal Kingdom came out of the Belmont Stakes that year with a slab fracture in his left-hind leg, Team Valor went right ahead with plans for Dubai the following spring with one prep race in mind.

Animal Kingdom returned from a long layoff and blew away the field in a turf allowance race in February 2012 at Gulfstream Park. Then, just when things seemed to be going perfectly, he reinjured the leg in his lone work before the flight out.

The injury however, turned out not to be as severe as the one suffered in the Belmont Stakes, Motion said, and Animal Kingdom came off a nine-month layoff to run a sensational second to Wise Dan in the Breeders’ Cup Mile.

In February 2013, Animal Kingdom again readied for Dubai with a race at Gulfstream, this time finishing second in a thrilling confrontation with Point of Entry in the G1 Gulfstream Park Handicap.

Motion had myriad issues to worry about, but he was relaxed and focused before the trip having already run Team Valor’s Lucky Chappy in the UAE. Derby at Meydan Racecourse the year before. Plus, the Dubai Racing Club and their agents take care of pretty much everything, according to Irwin.

With logistical issues and expenses largely in the hands of others, Motion could focus on immediate imperatives – such as training and medication.

“We had very specific guidelines to follow going to Dubai,” said Motion, who already was accustomed to the dizzying variety of medication rules between different states in the United States “It’s like we’re running in a different country every time we run in a different state. People don’t realize that – fans in general, the Europeans.”

Motion stayed on top of medication requirements in Dubai with his local veterinarian, Dr. Louis Castro. He didn’t want to repeat the disqualification of Brass Hat from second in the 2006 Dubai World Cup because of a medication violation.

“Everything is my decision,” Motion said. “With me being advised by Castro, who is being advised by several vets in Dubai. We had several conversations. He’d say, ‘This is the rule,’ and I would say, ‘Double-check with someone else.’ I always wanted to check that we were within our limits

“This is a horse that was coming back off a pretty significant hock injury,” he continued. “Obviously, like any athlete, when you’re dealing with an injury, there are medications that are therapeutic for the joint. So these are all things we had to take into consideration.”

Both Motion and Irwin agree that it is critical to find people you can trust and start asking questions when racing overseas.

“Every time you send a horse to a new place outside the country, there are all these stories and all these rumors – a lot of stuff is generated by people to discourage you from coming because you’re their competition,” Irwin said.

“Take Graham Motion,” he said. “Here’s a guy who was born overseas, and going to Dubai he was apprehensive – he’s a detail guy – and those people [at Meydan] made him very comfortable about going over there. And he was an international guy. It’s a daunting prospect, but there are many people that help you along the way.

“Graham is the kind of guy who even though he has a guy like me [who has been traveling overseas since 1972], he’s not going to take someone else’s word, or take it for granted,” he continued. “He’s going to check it out himself. If [an owner] wants to race overseas, the one thing they have to do is establish a really good relationship with a trainer that’s going to tell you what’s going on.” 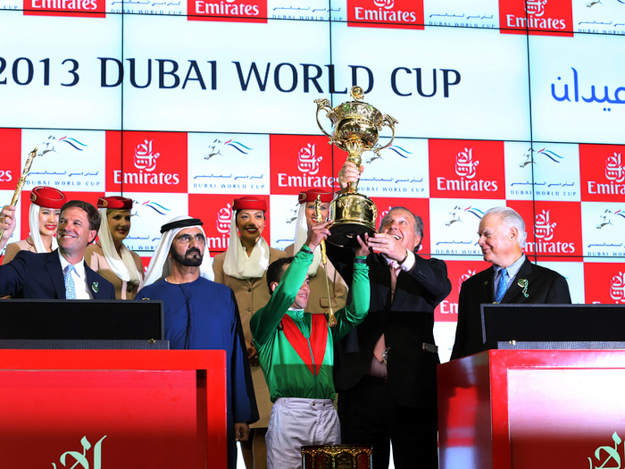 When Animal Kingdom won the Dubai World Cup, he was the first U.S.-based horse to even finish in the top three on the Tapeta surface at Meydan, which opened in 2010. Yet, it was no shock he could handle it. After all, he had won on multiple artificial tracks and trained routinely on Tapeta at the Fair Hill Training Center.

Even so, most of Animal Kingdom’s preparation for Dubai came on the grass course at Palm Meadows in Florida.

“When you run in Dubai, it’s a very Americanized system,” Motion explained. “It’s an oval; it’s flat. You’re not changing too much. The hard thing about Dubai is getting a horse that can handle the trip, getting him over there. The journey – it’s a tough journey. Though, quite frankly, they make it so easy now that most horses handle it quite easily.”

So, he decided to work Animal Kingdom on the track as well.

Motion’s preparation paid off as Animal Kingdom stormed to a decisive victory in the world’s richest race. The next day, Motion, Irwin, and Arrowfield Stud convened to plot a course to Royal Ascot.  Team Valor’s globetrotting star, who started the year in Florida and concluded March with victory in the desert, was headed to England.