Modern racehorses’ difficulty in winning the Triple Crown has bestowed a kind of mystique on the Belmont. As a graveyard of champions, it seems to require something that the Kentucky Derby and Preakness do not — something that Thoroughbreds have lost since the 1970s, 40s, and 30s, when Triple Crowns were almost routine.

Because the Belmont is the longest of the three classics, it is natural to imagine that what horses have lost is endurance. Modern Thoroughbreds, we’re often told, are not bred or trained to run a mile and a half, while their forebears were more comfortable going the distance.

But is that true? What evidence is there that horses don’t handle the distance of the Belmont as well as they used to? Here are the average winning times for every decade since the race went to 1½ miles in 1926. The data are limited to years when the track was fast — excluding those when muddy or sloppy tracks slowed the horses down. 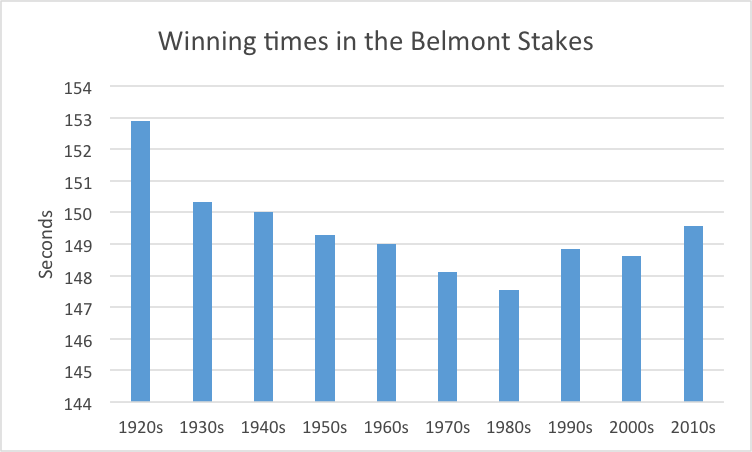 It’s true that winning times have been slower in recent decades than they were in the 1970s. But that does little to explain why the 1970s produced three Triple Crown champions and the decades since have given us only one.

If modern horses are struggling with endurance, we ought to find that the Belmont slows more at the end than it used to. But it doesn’t.

If modern horses are running out of gas in the Belmont, their predecessors in the golden age did too. Even Secretariat ran the last quarter of the Belmont slower (:25) than the quarter before (:24 4/5). (Arguably Secretariat could have run faster if he had any competition in the final quarter.) 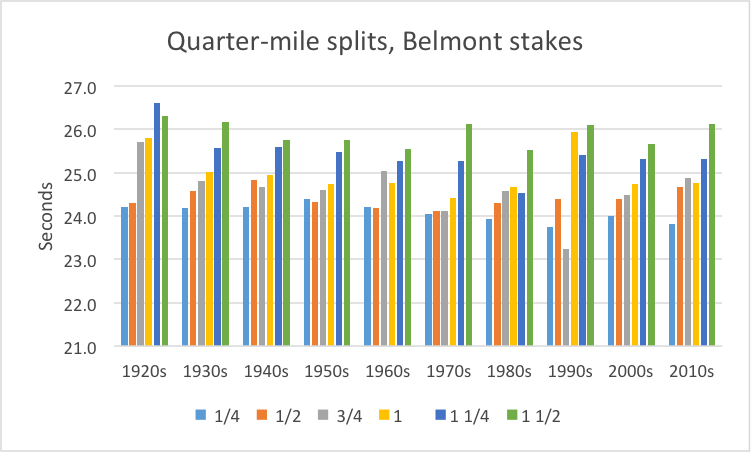 It’s not at all clear that modern horses are struggling with the length of the Belmont. If Triple Crowns are rarer than they used to be, there are plausible explanations that have nothing to do with distance. Belmont fields are larger today than they were in the 1940s or 70s, and that alone makes the Belmont harder to win. This year’s favorite, Exaggerator, is a strong closer with good endurance, but what helps his Belmont chances most is the absence of his top rival.

Paul von Hippel is an Associate Professor at the University of Texas, in Austin, where he teaches public policy and statistics. Before his academic career, he was a data scientist who developed fraud and risk models for US banks.