Bob Baffert is back at Belmont Park this week with the chance to win another Triple Crown through Justify. Yet, whatever the outcome, the Belmont Stakes, as the last leg of the Triple Crown at a mile and a half, has outlived its usefulness as the country’s signature 3-year-old Thoroughbred racing series.

Whether there is a runner eligible for the Triple Crown going into the Belmont or not, the outcome of the race has been consistently disappointing.

From 1979 to 2014, 13 horses won the first two legs of the Triple Crown but failed to win the last. However, whether the Triple Crown is on the line or not, over the last two decades the quality of the Belmont field, as compared to the Kentucky Derby and the Preakness, has been sorely lacking.

Three simple facts contribute to this.

First, the Road to the Kentucky Derby is grueling and, for the horses that do not win the Derby, their connections regroup and put together three-to-six-month plans for those who do not continue on the Triple Crown tour.

Second, the mile-and-a-half Belmont is a lone wolf - there is no other Grade 1 stake at that distance on the dirt in the U.S.

Third, no trainer in the U.S. under normal circumstances would run a horse at a mile and a quarter, a mile and three sixteenths and a mile and a half over five-week period. Tradition and history notwithstanding, the current distances and race spacing are no longer consistent with current industry practices.

Going back a generation, a mile and half was viewed favorably by breeders as a desirable distance to demonstrate a horse’s stamina. That has changed. Generalizations are dangerous to make, but here is a real-life example:

When I was working at the New York Racing Association, I would regularly travel to Baltimore for the Preakness with our racing secretary and director of hospitality to support the Kentucky Derby winner (in the hope of a Triple Crown attempt) and to recruit horses for the Belmont Stakes weekend.

In 2006, sadly, we were at the Preakness when Kentucky Derby winner Barbaro broke down in the first quarter of a mile. Bernardini, bred and owned by Darley and trained by NYRA-based Tom Albertrani, ran a most impressive race and won that Preakness by open lengths. While Barbaro’s breakdown hung heavy over the crowd, there was some consolation in the thought that Bernardini would be a strong entry and favorite for the Belmont Stakes.

Later that evening, Albertrani informed us that the owners were going to bypass the Belmont and train up to the Jim Dandy and the Travers Stakes, both run later that summer at Saratoga Race Course.

It is important to keep in mind that Darley and Sheikh Mohammed run one of largest and most important Thoroughbred breeding and racing operations in the world with farms in the U.S., Ireland, the UK, France, Australia and Japan. Having just won the nine-and-a-half furlong Preakness, they had already decided to skip the final leg of the Triple Crown. In hindsight it is difficult to argue with their logic as Bernardini went on to win the Jim Dandy, the Travers, the Jockey Club Gold Cup and finished second (to Invasor) in the 2006 Breeders’ Cup Classic at Churchill Downs. The thinking behind their decision in 2006 would seem to have taken hold in the minds of many breeders.

To provide some data and context, here is a list of all Belmont winners back to 2000: 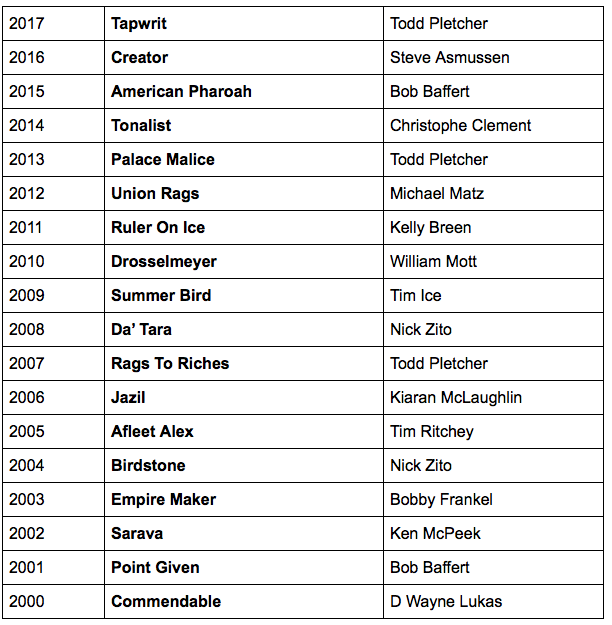 The number of these winners who went on to win an Eclipse Award is limited. American Pharoah and Point Given each won the Eclipse for both 3-year-old colt and Horse of the Year. Summer Bird and Afleet Alex also won the award for 3-year-old colt, and Rags To Riches won the 3-year-old filly Eclipse.

As for stud fees and breeding performance, only three stallions from this list are currently standing at a stud fee over $30,000:

Point Given first stood at Three Chimneys in 2002 for $125,000 and was subsequently syndicated for $50 million. Birdstone had some success at stud and currently stands at Gainesway for $5,000 and sired both Belmont Stakes winner Summer Bird and Kentucky Derby winner Mine That Bird.

Several of these Belmont Stakes winners have been been relocated to breeders outside the U.S. - Creator to Japan, Drosselmeyer to Brazil, Commendable to South Korea, Da’ Tara to Venezuela.

And it is interesting to note that four of the Belmont winners since 2000 - Da’ Tara, Jazil, Sarava and Commendable - never won another race after the Belmont Stakes.

NYRA has worked hard to develop and promote the three-day Belmont Racing Festival (June 7-9). It will have two Graded stakes on Thursday, four on Friday, and nine on Saturday, Belmont Stakes day itself. Yet the attendance numbers will be dwarfed by those figures for the Derby and the Preakness.

It would appear that the timing and distance of the Belmont Stakes is an anachronism. Some thought should be given to making it a more appealing and contemporary event by adapting current race-spacing practices for the Triple Crown events. This could certainly increase the Belmont Stakes field size, which in turn could make a positive contribution to attendance.