The most notable move in the highest echelons of the TRC Global Rankings this week comes because of a two-point swing that has pushed Bob Baffert up into a tie for second in the trainers’ standings with his U.S. compatriot Chad Brown.

There was relatively little Graded action in America last week, with just two G2s and four G3s taking place, and two of those went the way of progeny of Curlin, who gained four points and is now up to #7 in the sires’ standings. That’s one place ahead of Uncle Mo, who himself gained two points week on week thanks largely to another success in Australia from his 3-year-old son Man From Uncle, who won a G2 at Rosehill on Saturday.

Slowly but surely, Curlin and Uncle Mo and gaining on second-ranked Medaglia d’Oro in the U.S. sires’ standings. Maybe it won’t be long before they start to close in on longtime leader Tapit.

Another big climber for America was owner Martin Schwarz, whose High Ridge Road won a G2 at Laurel Park on Saturday. That meant a four-point gain week on week, and a big rise in the owners’ rankings  from 123 to 73 for Schwarz. It also helped rider Horacio Karamanos gain five points and 82 places in the jockeys’ rankings (up to 277) and trainer Linda Rice climb eight places in the trainers’ table (up to 106).

Rice is the second-highest ranked female trainer in the world right now - behind Australia’s Gai Waterhouse, who stands at joint 34 with training partner Adrian Bott.

Perhaps the finest training performance of last week, however, came from another Aussie, Kris Lees, who won three of the 26 Group or Graded races around the world.

In taking the three G3s at Randwick, the 45-year-old son of famed New South Wales conditioner Max Lees gained 12 points week on week, which helped him power 20 places up the rankings to #45. 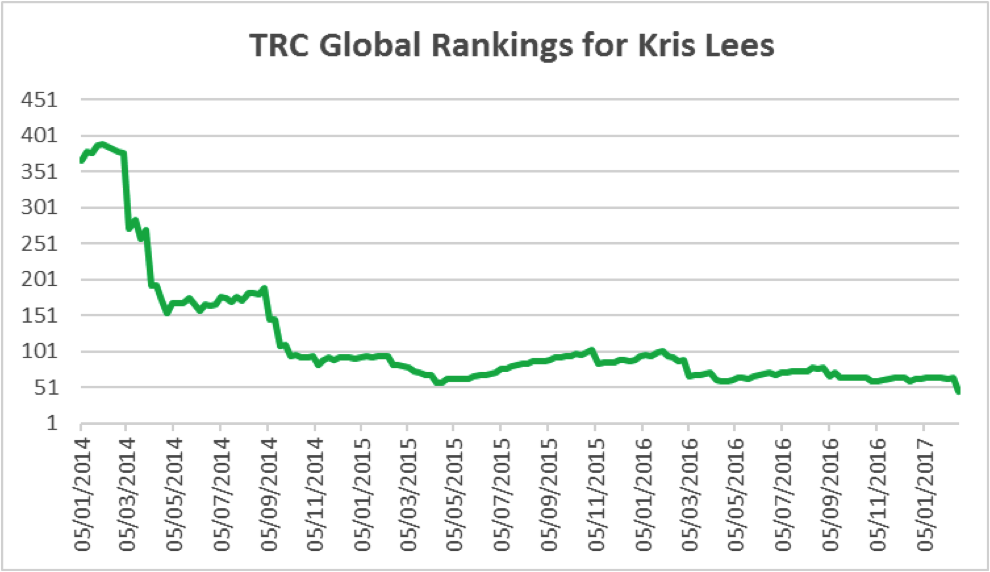 Lees - the current star at his stable near Newcastle, NSW, is last April’s G1 Queen Elizabeth Stakes winner Lucia Valentina - is up to #9 in the Australian trainers’ standings. He has been one of the country’s top operators since he took over when his father died in 2003.

As the graph shows, his current ranking is his highest in the three-years-and-a-bit life of the TRC Global Rankings.