Modern racing is finding itself more and more embattled, thanks in part to vigorous anti-racing campaigns. However, in 2013, the Australian Racing Board armed itself with its own facts on the retirement of racehorses. Trent Masenhelder spoke to researcher Renée Geelen, who was commissioned to gather accurate, representative data on the 11,000 racehorses, of some 17,000 born annually, that are retired in Australia every year.

There has long been mystery, uncertainty, and brisk debate about what happens to racehorses when they finish competing. During life as a competition athlete, they are largely nurtured, groomed, fed, tended with loving care, and prepared by their trainer as best he or she knows how, all with the aim of bringing home a cheque, and providing owners with the excitement that this industry promises. But what happens when a racehorse is no longer put through its paces every morning, floated to the races, and sent to face the starter? Does it see out its days grazing in sunbathed paddocks with dozens other fellow racers, or, as the animal activists will have everyone believe, are most of these retired horses considered “wastage,” and sent off to the knackery?

Every season in Australia, approximately 11,000 racehorses are retired for various reasons: injury, illness, advanced age. Some are deemed not fast enough, others not competitive enough, while many finish up because they’ve done enough for caring owners. The Australian Stud Book indicates that approximately 3,000 retirees go to stud, thereby remaining in the industry as breeding mares and stallions. However, what of the remaining 8,000? What happens to them?

In 2013, the Australian Racing Board (ARB) commissioned Thoroughbred consultant Renée Geelen to find out. The ARB has identified the retirement of Australia’s racehorses as its No. 1 animal-welfare issue, and it charged Geelen with surveying the retirement issue to determine what was really happening in the industry. Geelen is a native New Zealander, these days based in Sydney where she runs de Kabat Bloodstock. She has worked as a strapper, and has a Bachelor of Science with majors in physics and mathematics. 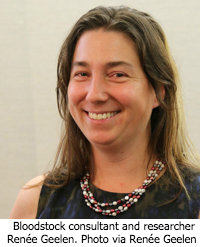 Geelen contacted 25 trainers across Australia with a combined total of 3,224 horses between them. This data set, she considered, was representative of the entire industry. Trainers were both city- and country-based, and incorporated some of the biggest names in racing, along with operations that had only a handful of horses. Geelen quizzed trainers, recording where their horses ended up after leaving the yard for the last time. While she took it at face value that trainers were telling the truth, admitting that it was not time-effective to follow-up on individual cases, she found, with only a very small exception, that trainers were open to her requests for information. The survey was designed in such a way that trainers had to be specific in their answers as to where horses had gone on retirement, and Geelen hoped that it would be harder to be untruthful while being so specific. When she received responses citing horses gone to stud or returned to owner, she double-checked this against Stud Book records.

“In general, people were quite open to the idea of the survey because they’re trying to do the right thing [in rehoming horses], and there are so many anti-racing people talking a whole load of... well, you know. Trainers wanted to be part of saying ‘yeah, we’re doing the right thing,’ and I think we got reasonably sound data. Apart from a few that had been euthanized for various reasons, most horses had gone on and found other jobs like pony club, polo, stock horses, and all sorts of things.”

“There’s a big data gap,” Geelen said. “For example, you don’t have to register a pleasure horse, so there’s no data on them, and nobody knows how many [ex-racehorse] pleasure horses there are in Australia, and who owns them. It allows the anti-racing groups to make up stuff. But the whole point of the survey was to move the debate beyond just stories, and groups like Animals Australia have a really strong following because they’re good at emotionalizing stories.”

Geelen said the racing industry had a history of not having data to back up its own claims when it came to racehorse retirement. She said the survey was an opportunity for the industry to say it had real data, and that it was considered, measured, and sensible – and not emotive. She added that a scientific approach was necessary so that the data would present a real answer, not the answer she, personally, was looking for. After all, this is a woman passionate about horse racing.

By the end of the survey, Geelen’s findings were reflective of a 2004 study funded by the Royal Society for the Prevention of Cruelty to Animals (RSPCA), and recently published as the “Hayek Study” by veterinary professor Paul McGreevy of the University of Sydney (McGreevy has a history of strong opinions on racing, including advocating for the banning of whips). A comparative look at the results of both studies goes as follows: 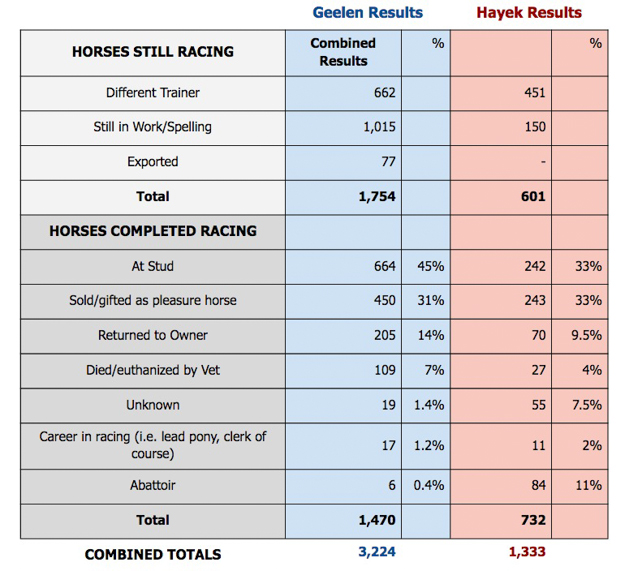 Geelen has issues with the Hayek Study. She said that though both surveys tended towards the same answers, the Hayek version included a higher proportion of country trainers, while her research concentrated on a higher proportion of metropolitan trainers. Geelen questions the objectivity of the Hayek work, and said that it buckets all horses having left a stable as having left the racing industry. The results contradict that.

Geelen insists that her survey was designed to reflect what is really happening with racehorses, not what the racing industry hopes is happening. She accepts that trainers may or may not have been telling her the truth, but Geelen said that her results are comparative with other surveys of this kind (including one conducted by Racing Victoria recently, and due shortly for publication), and therefore this indicates an accurate state of events.

“I wanted to ensure that the survey couldn’t be criticized for trying to find good news, and that it was as unbiased and scientific as a survey can be,” she said.

In proving this, Geelen pointed out that she came across stories of trainers not doing the right thing, but among the 25 she contacted, there were only two. She said from a scientific point-of-view, it was good to find them, because it meant she was covering all ends of the spectrum.

“It represented only six horses, so it wasn’t a widespread issue,” she said.

The anti-racing movement has the wider public believing otherwise. There are various claims that 18,000 Thoroughbreds are slaughtered every year in Australia, while in 2008, an investigation into horse slaughter by Amanda Doughty found that of 340 horses processed at an Australian abattoir, 40 percent had Thoroughbred brands. However, there is no way of knowing how these racehorses are ending up at slaughterhouses. Anti-racing groups cannot say if horses are arriving straight from the racetrack (this is their preferred point-of-marketing), or if they’ve had many years in other careers first, having been successfully rehomed by the industry after their racing days.

The ARB understands the importance of being able to provide tangible evidence concerning the retirement of racehorses, admitting it has long relied on anecdotal information and data. It is possible that the industry had become complacent, assuming that the general public accepted that racing people love their horses, and that they were answerable to the handling and treatment of the animals. This is no longer the case.

“In the face of the onslaught by animal rights extremists, racing must be able to prove its case, and provide the facts and figures for public consumption,” said Peter McGauran, CEO of the ARB. “Consequently, we commissioned this survey, and are able to tell a good story about the retirement of ex-racehorses.”

Furthermore, in July 2014, the ARB amended the Australian Rule of Racing AR.64, making it compulsory for managing owners and trainers to notify Racing Information Services Australia (RISA) of the retirement and death of any horse in their care. A “Retirement of Racehorses or Death Notification Form” was created.

“To consolidate the reliability of information going forward, we now require owners and trainers to notify us of, firstly, the retirement of a horse, and secondly, its destination,” McGauran said.

McGauran believes that Geelen’s study was groundbreaking, and will enable the community to be able to make informed decisions about its support and understanding of racing. He insists that the industry adheres to the highest standards when it comes to integrity and the welfare of racehorses.

“In today’s media climate, you have to be able to substantiate and prove the facts,” McGauran said. “I wouldn’t expect there to be a need for a survey ever again, because the retirement forms will tell us where horses have gone. Previously, we haven’t had those hard facts. The animal welfare groups are now incredibly sophisticated in media and public relations; you have to give them credit in their ability to simplify a message and communicate it to the widest possible audience. But, what we now have on our side is science and fact, and we just have to be a lot smarter in winning the public debate. We’re not up against amateurs. Exaggeration and distortion are stock in trade [for the anti-racing groups].”

There are a further two sections to Geelen’s study that are currently under discussion with the Retirement of Racehorses Committee, a subsidiary of the ARB. One involved Geelen interviewing a further 20 trainers about horses that were named but unraced, while the other addressed breeders about horses from the 2009/2010 foal crop that were unnamed. The Committee is considering presenting these results as a conference paper in the future.