Just nine months ago he was one of the great rising stars of world bloodstock, the dirt stallion on everyone’s lips, a future giant of the sires’ ranks in North America. But things then began to tail off somewhat for Uncle Mo.

He was responsible for a first crop that had already yielded six Grade 1 winners by the time Nyquist made it seven in the 2016 Kentucky Derby. The TRC Global Rankings algorithm was impressed, so much so that it had Uncle Mo as high was world #5 by the end of April last year. Some going for a third-season sire! The sky looked the limit.

Funny how things change. Last April was also the start of a barren patch nobody could have foreseen. The Ashford Stud stallion did not get another Group or Graded winner for seven months, and by then the algorithm had started to have doubts. By mid-November, Uncle Mo had slipped to world #39.

Now however, the situation isn’t looking so bad. Uncle Mo progeny have run five times in Group or Graded races in the last seven weeks - and won four of them. Those winners include representatives from each of his three crops to have raced so far, and two of them were Grade 1s (which means that suddenly each of those three crops has produced at least one G1 win each). 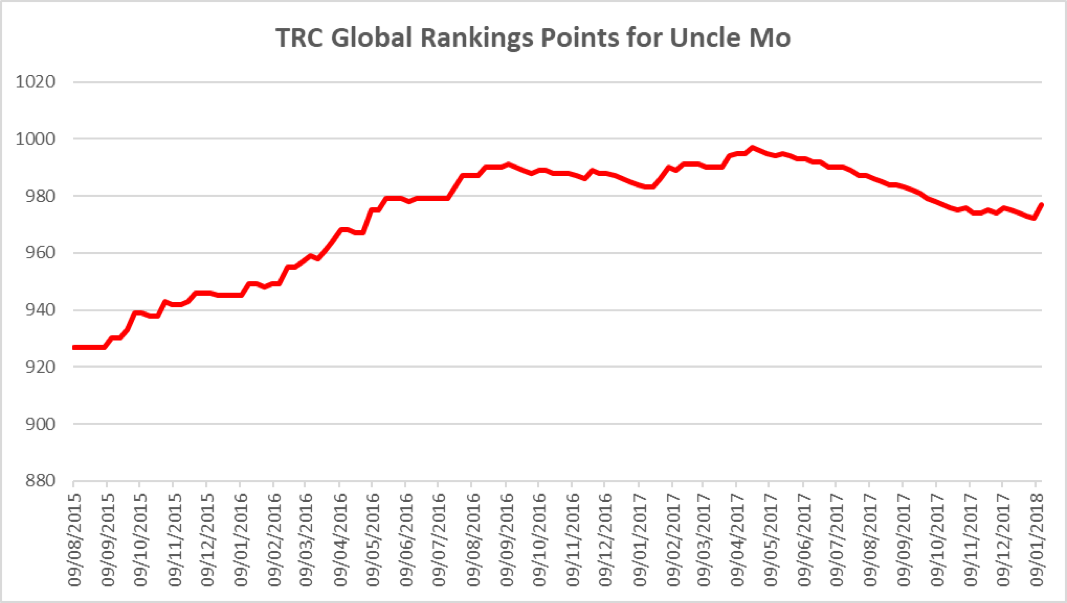 Then just last Saturday, the now 4-year-old Mopotism took the G2 La Canada Stakes at Santa Anita, and the year-older Ultra Brat won the G3 Marshua’s River Stakes, at Gulfstream Park. Now the TRC algorithm is beginning to see something in Uncle Mo once more. He is back up to world #25 in this week’s rankings, with the promise of more to come. Check out the trajectory in the graph alongside of his weekly points totals since he first entered the standings in August, 2015.

Over in Japan, meanwhile, another young stallion was making a first impression on the rankings.

Lord Kanaloa, the brilliant sprinter who has Japanese Horse of the Year in 2013, is a contemporary of Uncle Mo, although he raced on for another two seasons so his first crop hit the track only in 2017. Hopes are high at Shadai Stallion Station that the son of King Kamehameha can become a significant force, and a couple of nice types have already been noted. Last week he had his first Group or Graded winner when the filly Almond Eye (out of a Sunday Silence mare) took a G3 over a mile at Kyoto.

This moves Lord Kanaloa up to #282 in the rankings, six months after his first runner at this level. It may not amount to much just yet, but even the fast-starting Uncle Mo took a little while to make his mark.

Highest climber of the week across all four categories of the TRC Global Rankings is Salem Bin Ghadayer, a former endurance rider and trainer in the UAE who has achieved impressive results in just four seasons with a licence. Bin Ghadayer, 41, is particularly adroit at getting the best out of older horses, like Heavy Metal, the 8-year-old Exceed And Excel gelding who powered home from Thunder Snow in the G2 Al Maktoum Challenge Round 1 on the first day of the Dubai Carnival at Meydan last Thursday.

That means a 12-point gain week on week and races Bin Ghadayer up from #308 to #171 in the trainers’ rankings.

And that is probably only the beginning of a three-month surge for Bin Ghadayer as the Carnival gets into full flow. Despite a relatively small string, expect him to work his magic on any number of what are so far regarded as relative lesser lights.