The predictive power of TRC Global Rankings is its key facet. Only by monitoring this over weeks, months and years does the machine-intelligent system ‘learn’ how to produce the Jockeys, Owners, Trainers and Sires rankings most effectively.

For the latest week of action – the seven days that started on July 10 and ended July 16 – the TRC Global Rankings algorithm trains on data only up to July 9 to make its predictions. If the rankings math holds good, we expect the highest-rated jockey, owner, trainer and sire to win races in the test set more often than the second-highest ranked, and so on.

Only by making these predictions and accounting for both the randomness implicit in horse races and the career trajectories of the competitors, can we find out how to tune the parameters which make our system go: how much to weight recent events over old ones, large samples of performance over limited ones, big fields over small.

Here is an example. Last week’s big race in Europe was the Group 1 Darley July Cup at Newmarket, for which we published the following rankings before the race:

The rankings given in the four right-most columns are those in the rankings dated July 9. You can still find them this week given in the ‘Last Week’ column of our latest rankings, dated July 16. For instance, we had Harry Angel’s jockey, Adam Kirby, at #61 last week; as a result of this win, you can find him at #52 this week, after gaining four points.

The TRC algorithm then converts the overall rankings into race-specific ones, as follows:

Note that Harry Angel’s sire, Dark Angel, was our highest-rated for the race – above the likes of Scat Daddy and War Front – because previous results have suggested that this is the percentage call to make right now. In the other three categories, Caravaggio represented the leading jockey (Ryan Moore), owner (Coolmore Partners) and trainer (Aidan O’Brien).

So, which of the four categories is more important? And how often does the #1 ranked competitor actually win global Group and Graded races?

Remembering that all TRC Global Rankings predictions are strictly made ‘out of sample’ i.e. using results only before the date of the race, here are the aggregated results of our predictions over the last seven rankings weeks (since June 1) for a total of 232 races in each category: 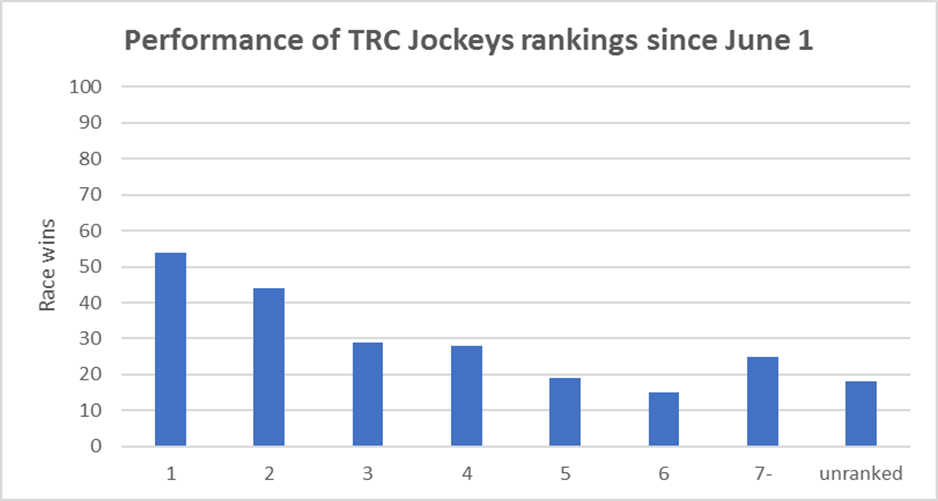 The four graphs which follow have the same vertical scale. A total of 54 of the 232 races (23.2 percent) were won by the highest-ranked jockey, while 98 (42.2 percent) went to a jockey ranked #1 or #2 in the race. This last figure is the joint-highest across the four categories. Only 18 races went to unranked jockeys – by far the lowest total.

This is the most volatile category, not least because of partnerships being registered under different combinations of names. Note that 102 of the 232 races were won by an owner outside the Top 500 in our published rankings. A total of 83 races (35.8 percent) went to the owner ranked #1 or #2 in the race – the third-highest percentage of the four categories. 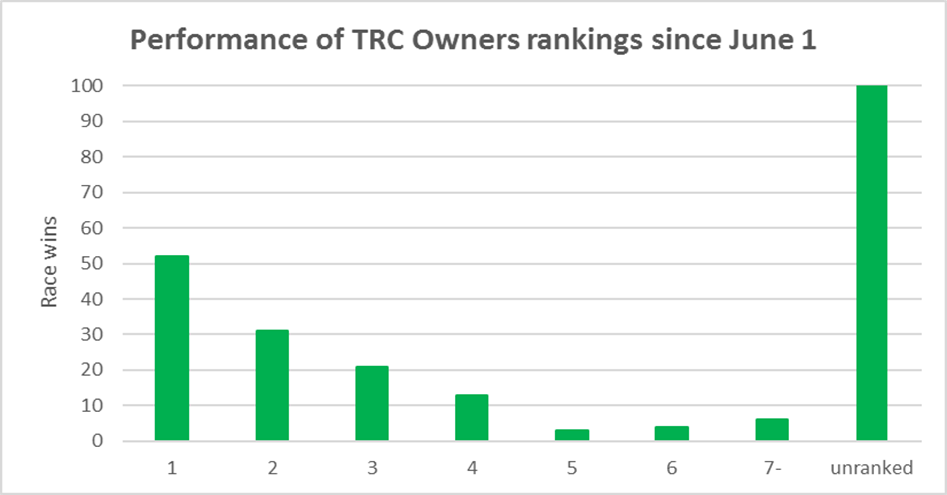 This category has seen the best performance of the rankings across all global Group and Graded races. 65 of the 232 races (28.0 percent) were won by the highest-ranked trainer, while 98 races (42.2 percent) went to a trainer in the top two rankings combined. This is the same as in the Jockeys category, suggesting the synergy between the two professionals that we know exists.

During the period under consideration, the TRC ranking of a horse’s trainer proved the most reliable indicator of its performance, compared with its jockey, owner or sire. 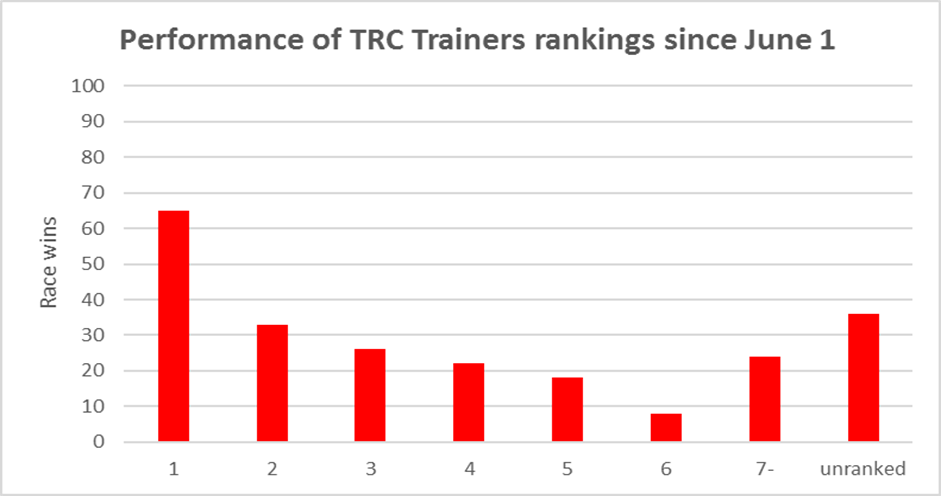 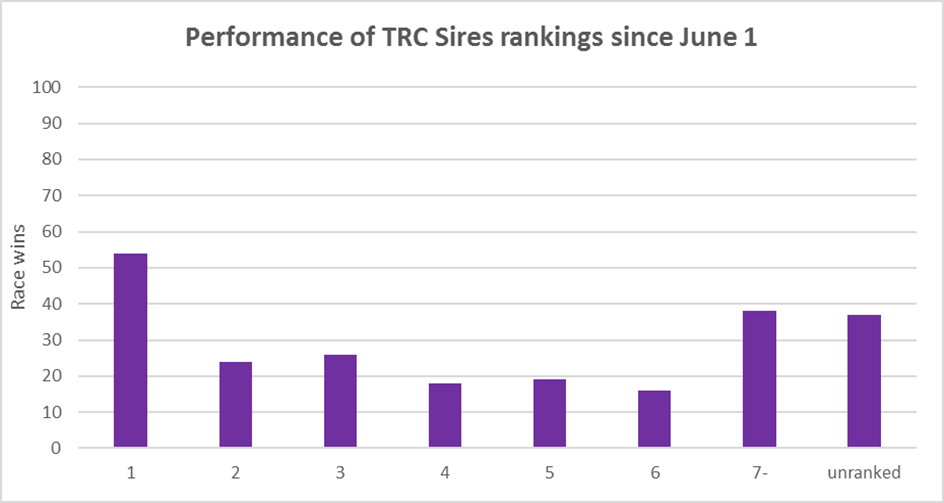 The performance of the TRC Global Rankings in the Sires category is perhaps the most interesting facet of this study. Owing to the modern-day practice of shuttling sires across the world, the diaspora of sires should lead to stronger rankings because there is a greater mixture than among, say, trainers, who operate in discrete territories for the most part.

The encouraging aspect here is the sharp drop-off from the performance of the #1 ranked sire (54 wins) to the #2 ranked sire (24 wins), which is a reflection of ‘super league’ of stallions consisting of Galileo, Dubawi, Deep Impact and Tapit quantified by our rankings points published each week.

So, next week we will look at the results of combinations of jockey-owner-trainer-sire. Who is the most important element in the Ryan Moore-Coolmore Partners-Aidan O’Brien-Galileo combination we have dubbed the ‘Fearsome Foursome’ in previous weeks?