According to TRC Global Rankings, the G1 Prix de l’Arc de Triomphe at ParisLongchamp is the world’s greatest race. In the majority of years, the concentration of Jockey, Owner, Trainer and Sire rankings is the highest to be found, and the same is often true of the performance of the winning horse.

Let’s consider this year’s race from a TRC Global Rankings standpoint. The table below show the current world ranking of the jockey, owner, trainer and sire of each of the 19 runners in Sunday’s race. The table is in order of sire ranking. 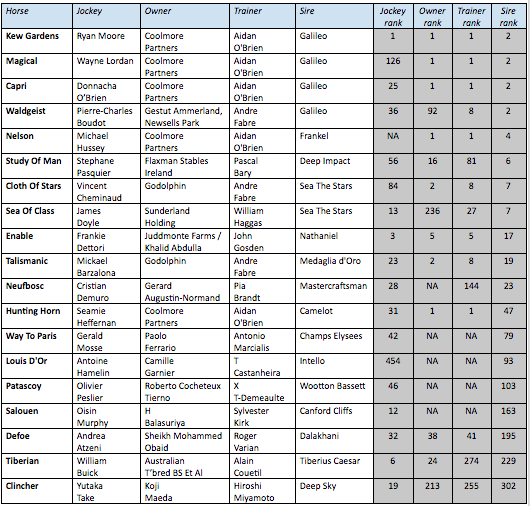 Two of the top three riders on our figures – #1 Ryan Moore and # 3 Frankie Dettori – may hold the key to the race, Moore because he is O’Brien’s stable jockey and has had the pick of O’Brien’s five runners (he has chosen Kew Gardens), and Dettori because he will be on board last year’s winner, Enable. The race includes 12 other jockeys we count among the world’s top 50.

World #1 Coolmore Partners have five runners and #2 Godolphin three. Between them, they account for 42 percent of the field, which just shows the dominance of these mighty concerns – note that we have a yawning 28 point-gap back to world #3 Hamdan Al Maktoum (unrepresented) in our current TRC Owner Rankings.

Enable’s owner, Prince Khalid Abdulla / JuddmonteFarms, is currently #5 but a former #1. He may need no more entries than the favourite to see his famous pink, green and white livery in the winner’s enclosure at ParisLongchamp.

There are four other owners with entries who we count among the world’s top 100 at present.

As mentioned, world #1 Aidan O’Brien saddles five, headed by Kew Gardens, winner of the G1 St Leger at Doncaster. The son of our world #2 sire Galileo was not considered in the elite bracket at a mile and half by many earlier in the season, being seen as more of a stayer in the longer term.

However, his racecourse performances have earned him the status as the stable’s #1 challenger: two races before the St Leger win, he carried off the G1 Grand Prix de Paris over the Arc course and distance.

Two other trainers in the current TRC Trainer Rankings top ten figure among the entries. World #5 John Gosden is represented by favourite Enable, but it is the great Andre Fabre – ranked at #8 this week – who has the stronger hand numerically in search of his eight win in this race.

He has Cloth Of Stars, Talismanic and Waldgeist to marshal, with the last-named – a son of Galileo – possibly having the best chance, even though Cloth Of Stars was second to Enable last year. The German-bred Waldgeist is still improving and bolted home in the G2 Prix Foy on trials day at the track.

Three other trainers in the world’s top 100 may be involved.

It is in the TRC Sires category that the elite status of the Arc becomes most apparent. Four of the world’s top seven sires – #2 Galileo, #4 Frankel, #6 Deep Impact and #7 Sea The Stars – account for eight of the 19 runners, or 42 percent.

A notable absentee is our world #1 Dubawi, who, though less prolific as a stallion than Galileo, is a brilliant progenitor whose stock have tended to beat Galileo’s when they meet (48 out of 66 times in 2018, for instance) which entitles him to higher rank, for now, under the strict terms of our methodology. Dubawi might have fielded any of Ghaiyyath, Kitesurf, Brundtland, Old Persian or several others.

Three other sires in the world’s top 25 are represented.