Even the mighty Winx was unable to stave off the upward surge of the Godolphin ranks last week. The mare won her 28th consecutive race at Flemington on Saturday - it was also her 21st G1 triumph - but it didn’t stop her rider, Hugh Bowman, from dropping a place in the world rankings.

The Aussie, now #5 in the TRC Global Rankings, has been leapfrogged by William Buick after the Godolphin jockey landed three Group races in France last week for a week-on-week gain of eight points.

Not that Bowman displayed any evidence of failing powers aboard the world’s highest-rated racehorse. As is the custom with Winx these days, it was heart-in-mouth stuff for her supporters before ice-cool Bowman found the gap for her to power home. She looked vulnerable at the 200, but she won a shade cosily in the end, as you can see in the video below.

It’s all systems go for her bid to land an unprecedented fourth Cox Plate next (October 27), but she’s been beating vastly inferior horses and the TRC rankings algorithm expects nothing less than victory every time she faces them - hence a zero-points gain for Bowman this time. Trainer Chris Waller gained three points, but he needed two other Group winners and a 1-2 in the Turnbull (his Youngstar was the runner-up) to do it. He stays at world #8.

Meanwhile, Godolphin trainer Charlie Appleby is now up to world #2. He too had three Group winners in France (all ridden by Buick). The resulting four-point gain means he has overtaken Bob Baffert and is now just ten points behind Aidan O’Brien. It’s looking increasingly likely that Appleby, who tends to be far more active from November to March than O’Brien, could take over the #1 slot within the next few months.

Another member of the Godolphin team who is flourishing at the moment is their Australian trainer, James Cummings, who is up to world #20. Expect him to climb higher over the next few weeks.

Godolphin themselves have more work to do to topple Coolmore Partners at the head of the owners’ standings, but they ate into the lead (now 24pts) again last week.

It was another fine few days for their stallion Dubawi, who extends his lead at the head of the sires’ category over Coolmore’s Galileo to six points after two Group winners.

Ironically, Galileo’s only Group winner last week, Line Of Duty, who took the G3 Prix de Conde at Chantilly last Monday, runs in the Godolphin colours, is trained by Appleby and was ridden by Buick.

Talking of sires, the week was a fine advertisement for the predictive qualities of the TRC Global Rankings. There were 55 Group and Graded races across the world, and in no less than 18 of them - that’s one in three - the sire of the winner was the highest-ranked stallion represented in the race. These are the races: 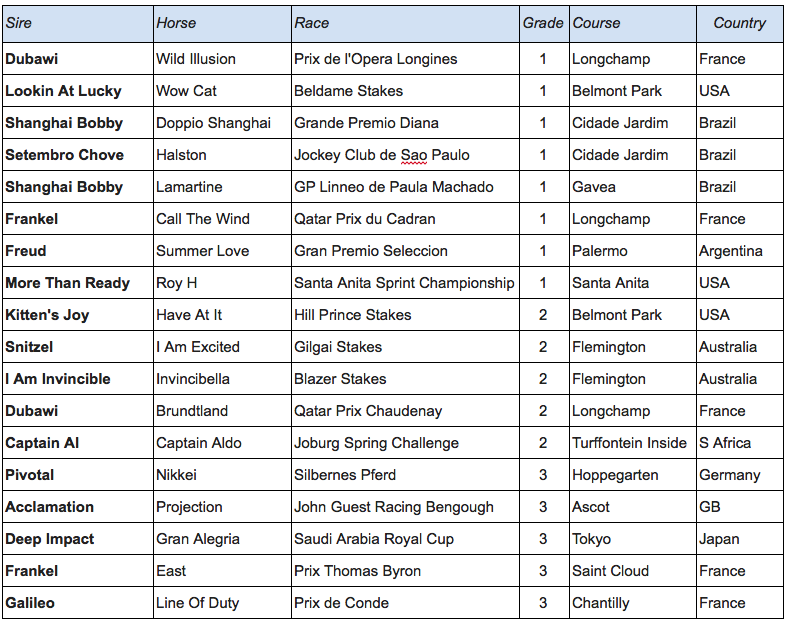