She’s officially the best racehorse in the world, and her return to action for the new season set a new benchmark on Saturday, but in terms of rankings and ratings Winx’s 19th Group 1 success made barely a mark.

While Pacific Classic winner Accelerate was chalking up a stunning Racing Post Rating (RPR) of 128 at Del Mar, Winx, whose mark of 130 at Randwick in April leads the 2018 Longines World’s Best Racehorse Rankings, was considered to have run no better than 111 on RPRs in winning the former Warwick Stakes, newly renamed the Winx Stakes.

And so used to high achievement by her connections has the TRC Global Rankings algorithm become that none of them have advanced much at all in their respective categories after this week’s update.

Indeed, Chris Waller actually lost a place. His points total in the trainers’ standings remains unchanged after the Randwick success, but he was overtaken after Andre Fabre’s tour de force in Europe and slips to #10.

There was no change either for jockey Hugh Bowman, who stays at world #5. Owners Magic Bloodstock actually gained two points but remain at #3, while sire Street Cry climbs one place to #14 after gaining a single point.

The victory (see video above) was not only the great mare’s 19th G1, it was also her 26th win in succession, eclipsing the record she held with Black Caviar. As is often typical when Winx comes to the racetrack, it wasn’t all plain sailing before she duly obliged at odds of 1/4.

Bowman admitted he was a concerned early in the race. “It’s been a while since she has run over this distance [seven furlongs],” he said. “It is a bit short of her best distance. She was struggling at the pace. When she balanced up and saw the winning post, what can I say, she is incredible.”

Waller was equally enthusiastic. “[I was] just looking for signs of her losing that dominance,” the trainer admitted. “Haven’t seen one ounce of it. If anything I’ve seen improvement.”

To commemorate win #26, Australia Post is issuing a A$1 stamp featuring Bowman and Winx, who is being aimed at a fourth Cox Plate victory in October.

Another thing the result achieved was to move the 7-year-old up to eighth on the list of the highest all-time prize money earners in the world (see table below). 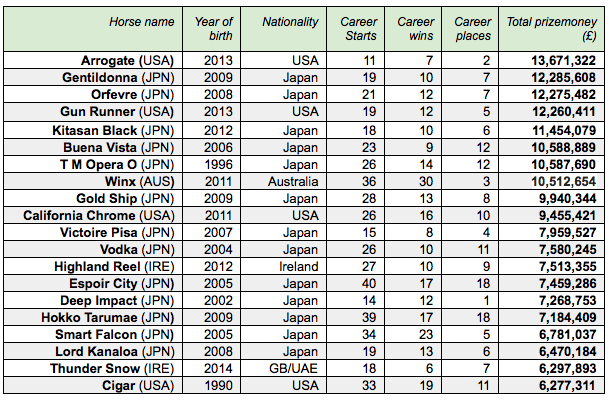 It should be noted that the Equibase list includes only horses that raced in North America even if only once, whereas the TRC standings include all horses worldwide (and is therefore - Arrogate and Gun Runner apart - dominated by Japanese). As an example, Espoir City, who was winning valuable races on the dirt in Japan until he was eight, is third on the Equibase list by virtue of a single run down the field behind Blame in the 2010 Breeders’ Cup Classic at Churchill Downs. He ranks 14th on our world list, but we would not include him in North American standings.