Aidan O’Brien’s domination of racing in Ireland and Britain over the past few seasons is like nothing any of us have seen before. He has won 14 of the 31 Group 1s run so far in the UK in 2017, seven of the 12 in Ireland. He has won eight of the ten classics in the two countries (and had the runners-up in the other two).

On Saturday, he will win his seventh British trainers’ championship. Even before Champions Day, he has won a record £7.25 million in prize money and is nearly £3 million clear of John Gosden in second.

His 21st Irish title is assured. His haul there is €6.43 million - roughly the same as the next FIVE trainers in the table put together.

He is so far clear at the top of the world trainers’ rankings that he seems to have disappeared over the next horizon.

And perhaps more significant than any of these achievements is the world record of Group or Graded races in a calendar year he seems certain to break very, very soon. O’Brien, who celebrated his 48th birthday on Monday, needs just one more to equal American Bobby Frankel’s mark of 25. And he has plenty of strong contenders in plenty of the key races still to come.

So pretty well all his runners are going off at falsely short odds, right? Bookmakers must surely fear the worst whenever there are one or more Ballydoyle horses in the line-up. It has to be a long time since you could get a good price about any of his horses, right? In Britain particularly, where he is obviously more selective about which races he targets with which horses, punters must be queueing up to bet on them. Right?

In Britain, a strange phenomenon is apparent. Sometimes, even now, Aidan O’Brien is being underestimated.

You might think then that those 24 winners were more or less all short-priced favourites. Yet, on the contrary, nine of them started at 4/1 or longer. And six of them - 25 percent - were 8/1 or longer.

Some punters obviously didn’t think quite so much of their chances. 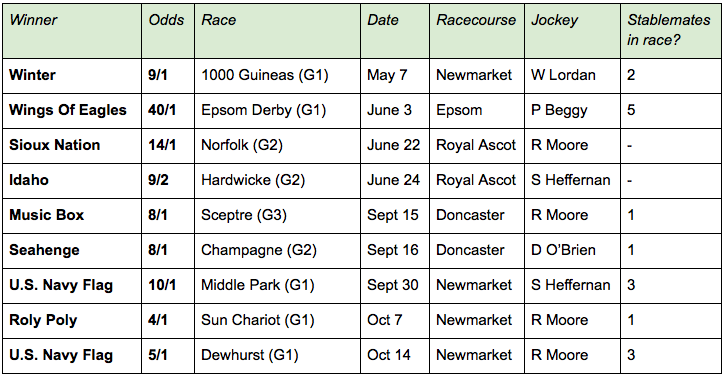 Of course, in many of the most prestigious races, O’Brien often has multiple runners - Wings Of Eagles was one of six in the Epsom Derby, for instance. It used to be said that, when he saddles up a large squad, it’s a scattergun approach, that none of them are particularly outstanding.

If that was ever the case, it certainly isn’t now. Surely bettors should have realised the obvious truth: there are so many top-class horses in the yard these days that, when O’Brien runs several in one race, pretty well all of them have a chance. There are very few no-hopers.

Notice that one horse appears twice in the table above. The case of U.S. Navy Flag is a good example of the Brits underestimating O’Brien.

It’s relatively easy to understand why the son of War Front was allowed to go off at 10/1 for the Middle Park Stakes - he was part of a Ballydoyle contingent of four, for a start, and Ryan Moore had elected to ride one of the others. It was U.S. Navy Flag’s ninth race of a busy campaign, and he looked thoroughly exposed, and not top class.

The starting price of 5/1 for the Dewhurst Stakes last Saturday is a little harder to explain.

This time he was the only G1 winner in the field, the winner of his two previous races, and now the choice of Ryan Moore, again as part of a four-strong Ballydoyle contingent. It may have been his tenth run of the year, but the previous week his full sister, Roly Poly, had won her third G1 of the season, over the same track, and obvious similarities between the two were apparent - most significantly that they get better the more they run.

Of course, the main reason U.S. Navy Flag was less respected in the market than perhaps he should have been came in the shape of the Juddmonte colt Expert Eye, who was already 4/1 favourite for the 2000 Guineas after an impressive win in a G2 at Goodwood at the beginning of August.

Yet, as the chart here shows, the betting market was not reflective of many of the available facts.

Beyond that, U.S. Navy Flag, out of a G1-winning Galileo mare, arguably has a stronger pedigree, and he had won twice on the Rowley Mile already while the inexperienced Expert Eye had never raced at Newmarket. The market was betting on perceived potential rather than hard facts. When those hard facts involve Aidan O'Brien, it's a curious approach.

In the event, of course, Expert Eye was last of nine after running too keenly early on, and the Ballydoyle quartet finished 1-2-3-4.