It’s not a matter of how many winners they ride, or how much prize-money their mounts accumulate. It has very little to do with how many times they have been champion jockey. If you’re trying to find out who the best riders are, you use those traditional measures at your peril. Racing analyst James Willoughby advocates a more scientific way of interpreting the stats.

Read "For the ultimate global jockey, less is definitely Moore"

If I showed you Gentildonna winning last year’s Japan Cup, Magician in the Breeders’ Cup Turf, or Estimate in the Ascot Gold Cup, you might find the next suggestion seductive: Ryan Moore is the best jockey in the world.

The 30-year-old is at his peak and has a racing brain as sharp as anyone who has come before him. Some jockeys have only an instinctive grasp on the best way to ride horses from a tactical perspective, but I know that Moore gets it at a much deeper level. He can clearly process the visual and physical stimuli during a race fast enough to make calculations at lightning speed on the fly. He is strong and dynamic, decisive and competitive. My intuition is that nobody can be better.

All very well. But can I prove it? Can I present evidence beyond the instinctive, better than the empirical, more scientific than the lazy subjective?

Faced with this same question, racing analysts traditionally recite major races won – as I have done above. Or, they resort to winners’ totals (Moore has had 1,585 in Britain to the end of 2013) or championships won (he was Champion Apprentice in 2003 and overall title winner in 2006, 2008, and 2009). These measures are so-called “counting stats” – accumulations with no respect to the context in which they were achieved.

One step further than this is the rate stat – wins per year, wins per month, or better still, wins per ride. The last-named measure is commonly referred to as “strike-rate” and taken by many as a measure of efficiency. We’ll see in a minute that this is flawed. 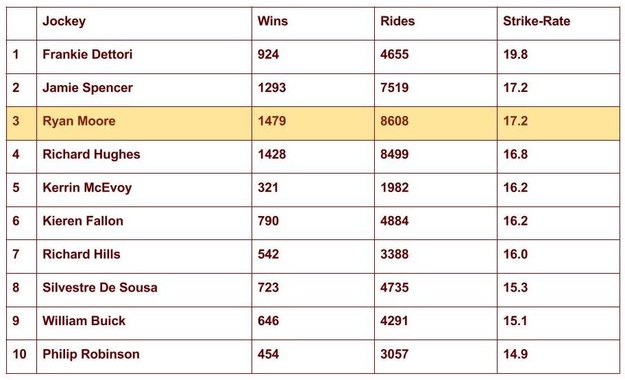 You can see why strike-rate is so convincing as a measure of the best jockeys – the list above contains many of the most successful British jockeys measured by counting stats – wins, prize-money, championships. So, the concept that strike-rate measures a jockey’s ability quickly chimes with our experience.

If the rate statistic strike-rate puts a jockey’s wins in a better context, it isn’t the end of the story by any means. It’s clear to even the novice racing fan that the quality of a jockey’s mounts counts for something (they call it “horse racing” for a reason), so let’s take a measure of the quality of horses that the 109 riders in our 2004-2013 sample have had to ride by listing the top 10 riders in this category: 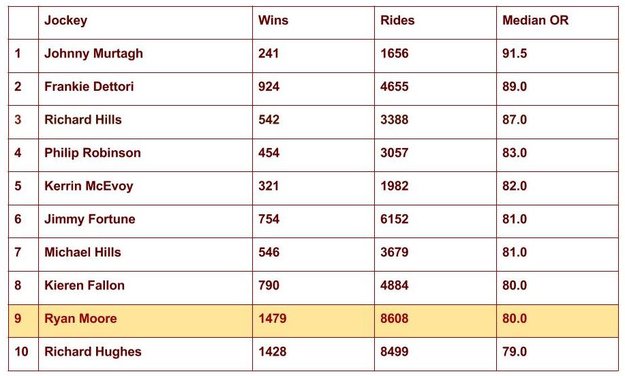 The column ‘Median OR’ is the median British Horseracing Authority official rating of each jockey’s mounts of those horses qualified for a figure. It is a coarse measure of a jockey’s winning opportunities because most British flat races are handicaps, but it serves as a proxy for the standard of horse a jockey tends to ride. You should quickly see that seven of the top 10 jockeys listed by strike-rate are also in the top 10 listed by quality of mounts. Let’s investigate the relationship more fully by graphing all 109 jockeys who had at least 1,500 mounts between 2004 and 2013 (shown below):

The points on the graph are split by a trend line that is given by the equation on the graph. This is called a regression equation, which serves as the best-fit of a jockey’s strike-rate with the quality of the mounts he has to ride. Under the equation is the correlation coefficient R, which measures the strength of the relationship between the two variables on a scale of 0 to 1. In this case, there is a strong, positive relationship between strike-rate and median official rating.

The points above the trend line represent jockeys who have won more races than the median official rating of their mounts would suggest, while those below it have underperformed by this measure. Picked out at point (80, 17.2) is Ryan Moore – significantly over-performing by the relationship of strike-rate to median official rating.

An interesting feature of the graph is the dispersal of points above and below the regression line at its extremes. This may be interpreted as the jockeys who have the lowest quality rides generally perform as expected, but there is a wider spread of ability among the jockeys with the best mounts, simply because there are fewer of them blessed with superior opportunity. Leading owners and trainers are potentially misled by counting statistics.

Let’s see how the other 108 jockeys in the data-set rate. Here are the top 10 “overachievers”: 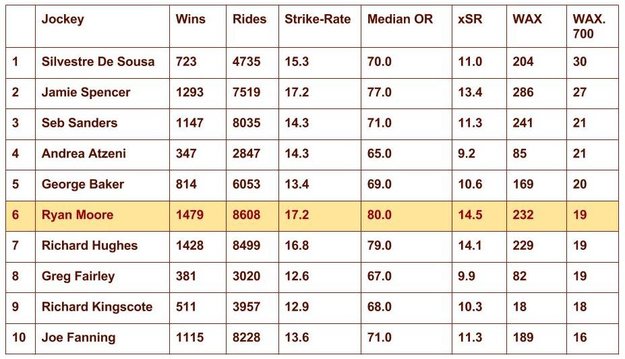 The three new columns added are typical for this type of statistical analysis. xSR is read as “expected strike-rate” and is the typical strike-rate associated with a jockey of the given median official rating. WAX is “wins above expectation” that performs the same calculation I did above for Moore – surplus winners considering expectation. Finally, WAX.700 is the number of winners above expectation per 700 rides, a typical season for a jockey within our sample.

So, we can say, “Silvestre De Sousa has ridden 30 winners more per season than might be expected from the median official rating of his mounts.”

Moore rates very well by WAX per 700 rides, which is a much better measure of the efficiency of British flat riders than wins or rides or strike-rate or any other frequently stated statistic. However, it is still far from the best we can achieve. In fact, WAX.700 is biased towards riders who have taken the preponderance of their mounts in lower-quality races and against riders, like Moore, who compete in the best, most competitive races.

As I say, we can go a lot further in assessing jockeys, in the same way, it is now increasingly common to rate players in football, baseball, ice hockey, and many other sports that take the assessment of efficiency a lot more seriously than we seem to do in racing.

The lesson is that you can’t assess a jockey without taking the quality of his mounts into consideration. From the statistical perspective of WAX, at least 75 percent of the variance of a jockey’s strike-rate is a function of the horses he gets to ride. So, we can say that the chance that a jockey’s success is not strongly related to the quality of his mounts (known in statistics as the “p value” of the model) is infinitesimally small - a decimal with 30 zeros followed by a five. This is massively more solid than evidence regarded as scientific fact.

The WAX ratings show that some of the top jockeys actually deserve the opportunities they receive because, like Moore, they greatly overachieve reasonable expectations based on one measure of their winning opportunities, the quality of their mounts. The law of large numbers dictates that it is bad science to make judgments from small samples, and we should also heed the danger of making biased observations, like those commonly applied to Jamie Spencer - a jockey who has received more criticism for giving his mounts too much to do than any other in British racing history.

I remain convinced that Moore has the qualities I mentioned in the introduction, and I would not choose anyone else to ride my horse, if I were a trainer or an owner. But I can’t be confident in asserting that he is out on his own in terms of efficiency based on my presentation here. This is nothing like the limit of applied maths, however, I hope to show you in future that the Moore you study the numbers, the Moore you will be impressed.

Data for this article extracted from Proform Professional.

Read "For the ultimate global jockey, less is definitely Moore"