American Pharoah is one of the best Kentucky Derby winners of recent years. He is a brilliant horse who was likely far better than he was able to show at Churchill Downs owing to a wide, whip-happy ride by Victor Espinoza that resulted in him losing ground and, likely, momentum.

This colt is surely a Triple Crown candidate in terms of talent. The Preakness Stakes should see him register a more impressive win, though the Belmont Stakes is a much bigger obstacle; the strong-finishing fourth, Frosted, would be a formidable opponent, for one. He’s by the superb Tapit, sire of last year’s Belmont winner Tonalist.

As he often does, Washington Post columnist Andrew Beyer got it spot on when he wrote of the Derby result: “The slow finish underscores the fact that few U.S. racehorses – even the best of them – are bred to run 1¼ miles.”

From a statistical standpoint, there can be little doubt about the veracity of this. Three-year-olds might get 10 furlongs on a fast track by the end of the campaign, but in May the trip is too far for most of them to sustain their speed.

Is there any other reason why an undoubtedly vintage crop of 3-year-olds combines to run as slow as 2:03 for the Derby?

One theory is that the steadily declining time of the Derby is a function of the track drying out during the period the preceding G1 Woodford Reserve is run on turf. This might result in the absolute time being affected, but it would not change the relativity of the splits during the race.

If a horse in peak form like American Pharoah slows down more than the average horse winning the Derby, it is either because the early pace was too strong or it can’t go the distance.

On the first point, we can surely content ourselves that the pace of the 2015 Derby wasn’t too strong. Visually, the leaders seemed to relax into the beat of their stride, the 1-2-3 finishers occupied essentially the same positions throughout. Moreover, on a track labelled “fast,” it is a poor show if the first-quarter split of 23.24 seconds is too demanding for a colt rightly regarded as brilliantly fast.

So, here is the simplest method possible to determine how well the best 3-year-olds in America finish the race that matters to them most:

1) Calculate the average speed of the race from the final time;

2) Calculate the average speed of the final quarter from the split time;

3) Express the two as a ratio using percentages;

4) Compare across the years.

Now, in years where the pace was too strong – such as when Orb won in 2013, the final quarter will come out particularly slow compared with the overall race-speed. What we are interested in, however, is the trend or “best-fit line,” which is a technique of basic statistics.

(Note that there is every reason for recent winners to finish faster than those of former decades because there are fewer horses getting in by dint of their 2-year-old exploits over sprint distances because of the new points system imposed by Churchill Downs. This should result in a greater weight of true middle-distance horses and thus a more even pace.) 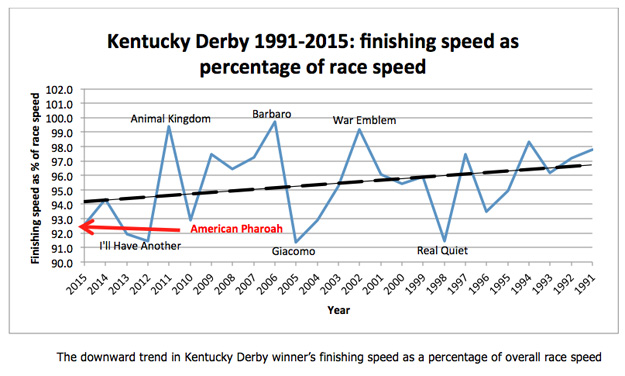 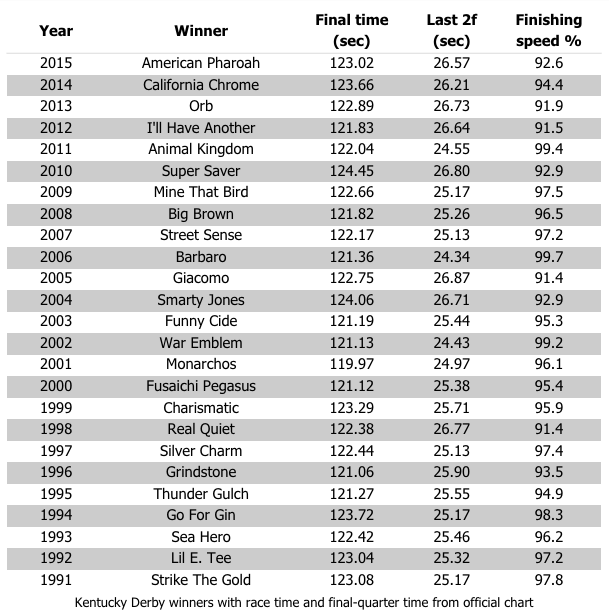 The three outlying winners above the trend-line are War Emblem (2002), a front-runner who rode a powerful inside bias on a very fast track, and the strong stayers Barbaro (2006), who was by stamina influence Dynaformer, and Animal Kingdom (2011), who is out of a mare by the three-time German Horse of the Year Acatenango.

Surely there is a massive advantage to be had from injecting more stamina into the American Thoroughbred.

American Pharoah runs like he is a stayer and probably owns a bit more stamina than the two horses he raced round the track with, Firing Line and Dortmund. But the run of the race saved him from any challenge from Frosted, while my fancy Mubtaahij was not capable of landing a blow.

Nevertheless, it would be great to see more horses with Animal Kingdom-style pedigrees come calling at Churchill Downs.