While it might be unexpected to see the likes of Secretariat and Seattle Slew floating down the Mississippi River, Turn Services was founded in 1990 and is one of the largest independent fleeting and shifting companies in the United States.

The company’s current chairman, David Fennelly, was born in Ireland, and when he came to the United States to make his way in the world, he started as a groom at Spendthrift Farm.

“He decided to try to make the American Dream happen, and he moved to Lexington to become a farm hand,” said Mario Muñoz, the president of Turn Services. “Mucking stalls and doing whatever he could do, that was his first foray into business here. He came to the U.S. with about $400 in his pocket, got a job at Spendthrift, and the rest is history. He’s always loved horses.” 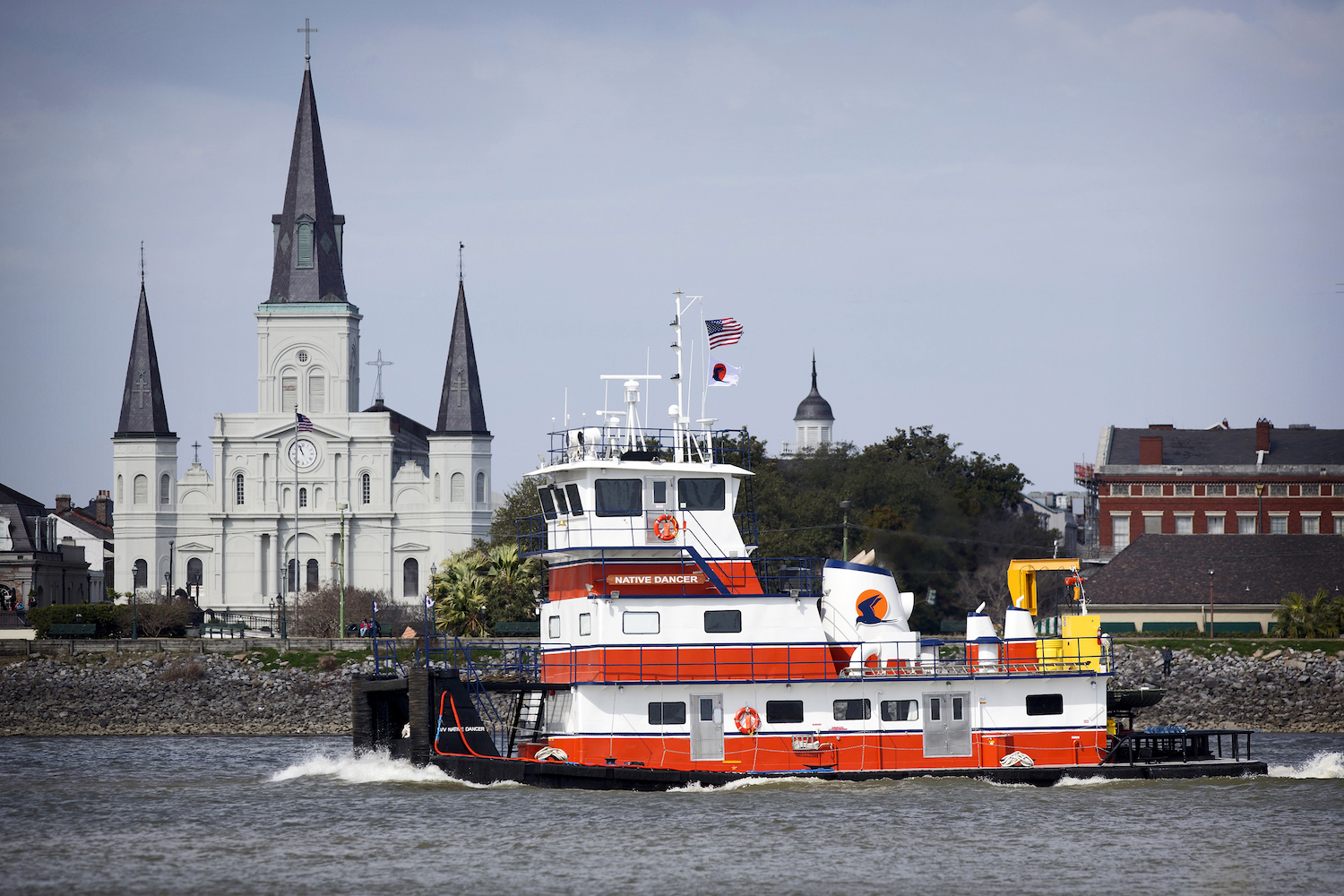 Fennelly worked at Spendthrift for several years then got into the coal transportation business on the rivers before eventually buying Turn Services.

“Back in 2004, when David and his business partner actually purchased Turn Services from the founder, Frank Morton, we had one boat and that’s it,” said Muñoz. “It was a one-boat fleet. We knew that we were going to grow, though, and, as we had a plan to start acquiring new boats, there was a discussion about what to name them.”

While many companies traditionally name boats after people, the powers-that-be decided they would rather go for a theme. Morton suggested using Triple Crown winners, and Fennelly loved the idea.

“He always loved racehorses, and their strength and determination is exactly the kind of motto we want with our organization, both when it comes to our teammates and to the services we provide our customers,” said Muñoz. “We named the first one after Secretariat. We never would have thought the company would grow beyond the number of Triple Crown winners, but we soon did.”

At the time Turn Services began using racehorse names, there were 11 Triple Crown winners. When the complete list had been run through, it was time to find another set of criteria for its ever-growing fleet.

“After we ran out of Triple Crown winners, we started looking at other famous Thoroughbreds,” said Muñoz. “It is actually a pretty involved process when we decide we are either going to acquire or build another vessel. We all get together internally and look at the history of these racehorses.

“We have boats like the Man o’ War and the Native Dancer. The names have to be interesting, but it also has to be a Thoroughbred that has got winning traditions. There are a lot of great horses from the past that have captured the hearts and minds of the world when they were racing, and we try to honor them.”

Other horses who did not win the Triple Crown but are celebrated include the likes of Rachel Alexandra and Zenyatta, as well as the newest member of the fleet, Barbaro.

“We thought it would be fun to do an online poll on Facebook for our newest boat,” said Muñoz. “The three names we had people vote on were Barbaro, War Emblem, and Alysheba, and Barbaro got the most votes.”

Of course, after American Pharoah’s exploits in 2015, there was no debate about what the next boat would be named. After all, he was the first horse to capture the Triple Crown since Turn Services began naming its vessels after such champions. 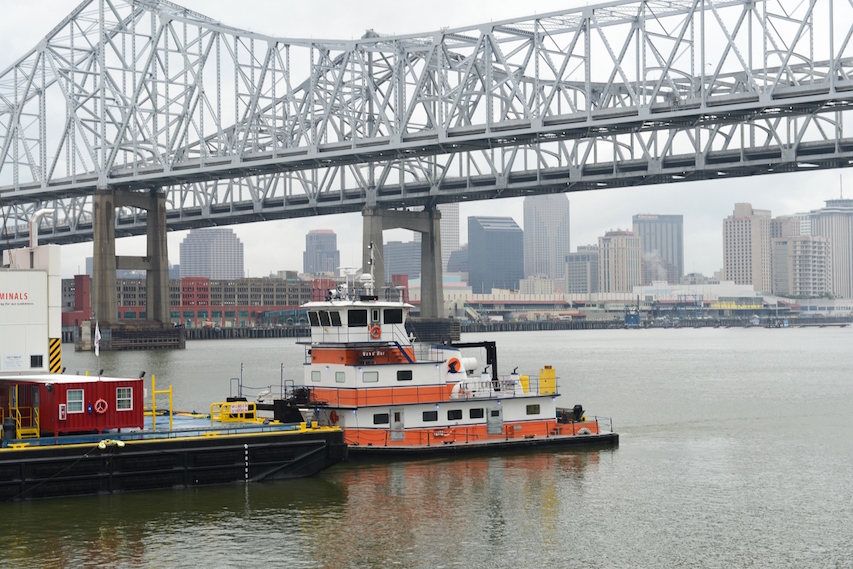 Last February, the tow boat American Pharoah had its official christening. Rather appropriately, it stood out among the crowd as well. At 120 feet by 34 feet with an 11-foot draft and rated at 4,000 horsepower, the American Pharoah became the largest towboat in the company’s fleet.

“It is typical with our boats to celebrate the christening, but indeed it was a much bigger event because he was a Triple Crown winner and all the excitement that revolved around that,” said Muñoz.

Horse racing has become part of the tradition at Turn Services, and so each Triple Crown season brings with it a certain amount of anticipation.

“Obviously, with the Fair Grounds down here, New Orleans is a pretty big horse racing town,” said Muñoz. “It is just exciting, and people get involved and follow these horses, especially when you have a horse win the Derby and the Preakness, and the energy starts.

“Every year, if a horse has won the first two legs of the Triple Crown, we throw a huge Belmont Stakes party for all of our friends and clients and customers. With American Pharoah, we had rented out a restaurant, and, boy, was that a great time when he actually won. It is a lot of fun, and people all over our industry have had a lot of fun with it.”

Much like Fennelly, Muñoz also has a tie to horse racing. Prior to working for Turn Services, he spent most of his professional career in Louisville, where it is almost impossible to avoid the impact of the Kentucky Derby.

“From years and years of attending the Kentucky Derby, I got excited about horse racing,” said Muñoz. “When you live in Kentucky, it is all around you. I personally don’t have any ties to Thoroughbreds, but I really enjoy horse racing. Now, I have been at Turn Services five years, and it’s pretty cool we have this tradition.”

As for Fennelly, he has gone from naming boats after Thoroughbreds to owning his own.

Being based in New Orleans, Turn Services is aware of the importance of the Louisiana Derby to its local track. As such, it traditionally has named crew boats — which are smaller, passenger vessels used to shuttle crews around — after Louisiana Derby winners, so fans of Black Gold, Risen Star, Dixieland Heat, and Pyro, to name a few, should also keep an eye out.

However, there is a good chance that the 2016 Louisiana Derby winner’s name will be given to a tow boat rather than a crew boat. It would only be fair since he went on to be the 2017 Horse of the Year.

“We are actually in the process of building two new boats that we will take delivery of at the end of this year, so we will have two more that we will name after Thoroughbreds,” said Muñoz. “Gun Runner will definitely be in the mix when it comes time to decide, and I think it would be a really great name for a boat on the river.”