For lovers of racing, little compares to an afternoon (or evening) at the track. The sport is best experienced in the flesh, and the world’s race courses offer diverse ways to enjoy this pursuit. While we can’t literally transport you to the races, we’ll do our best to bring these tracks to you in a monthly series of profiles. Today we look at Aintree, home of this Saturday’s Grand National. It is a modern, gleaming racecourse admired across Europe, but that hasn’t always been the case - as Sean Magee explains on day two of his five-day analysis.

From the early days under founder William Lynn, Aintree staged racing on the flat, though as the Grand National increased in reputation there was little room for a non-jumping circuit to be expanded. Turns on the flat course were very tight, and the straight five-furlong course cut diagonally across the infield of the round circuit. 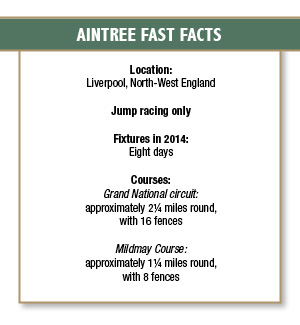 The flat programme at Aintree included some mildly prestigious races, such as the Union Jack Stakes, in the 1954 running of which 18-year-old Lester Piggott finished runner-up on Never Say Die. Two months later, Never Say Die became the first of Piggott’s nine Derby winners. But the most famous horse to race on the flat at Liverpool (as the course has been formally known for most of its history) was none other than Red Rum himself, who ran his first race here as a two-year-old in 1967 – the day before Foinavon’s Grand National – when, ridden by Paul Cook, he dead-heated for first place with a horse called Curlicue. Red Rum returned to Liverpool as a three-year-old, when he was ridden by Piggott in the Earl of Sefton’s Handicap (£437/$727 to the winning owner) and was beaten a short head.

By the early 1970s, flat racing here was a dismal affair, and it came as no great surprise, nor was there much mourning, when the flat was discontinued after the Grand National meeting of April 1976.

The flat course at Aintree did not survive, but the Mildmay Course, a chasing and hurdling circuit first used in December 1953 that is much smaller and tighter than the Grand National circuit, did – but only just.

Initially, the steeplechase obstacles on the Mildmay Course were scaled-down versions of the National fences – not as demanding as the real National fences, and thus a better proposition for novice chasers. But, the new steeplechase course failed to find permanent favour with owners and trainers, and by the early 1970s, was being used for only one race, the Mildmay Chase. In 1976, when the Clerk of the Course at Aintree was the widely admired John Hughes, the Mildmay Course was rebuilt with orthodox fences: birch packed into a wooden frame, rather than the fir and gorse from which the National fences were made.

For decades, the administration of Aintree Racecourse was run by the Topham family, who had long managed the course after buying from the Earl of Sefton in 1949. At the vanguard of the Topham family was the indefatigable figure of Mrs. Mirabel Topham, who always seemed to be arguing with everyone in sight – notably the BBC over broadcast rights – but was a great innovator.

Among her more spectacular initiatives was the installation of a motor racing circuit, which opened in May 1954 with a programme called “International Car Racing.” The start and chequered flag were in front of the existing racecourse stands, and the circuit kept directly inside and alongside the Grand National course for most of its route, with various tight turns – too tight for later motor-racing taste – near the end of the lap. 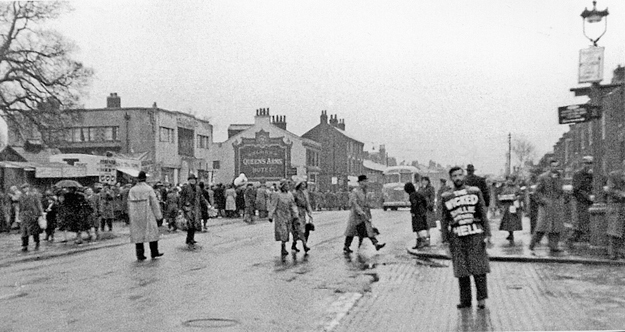 The level of sport on the new circuit was of a high order. Stirling Moss beat Juan Fangio to win the 1955 British Grand Prix at Aintree, Moss’s first Formula One victory, and won the Grand Prix again there in 1957. In all, the course hosted the British Grand Prix on five occasions, but when in the early 1960s that race was relocated to Brands Hatch, the future of Aintree as an international circuit looked bleak. It could not survive, and in 1964, it held its last meeting. But, the track itself was put to good use as the road where roving car-mounted television cameras could film a large part of the Grand National.

It was while Mrs. Topham was at the helm in the mid-1960s that rumours started circulating that Aintree was about to be sold to property developers, leaving the Grand National, with all its enthralling history, buried under swathes of new housing.

How horseracing at Aintree came desperately close to extinction is a long and complicated story, but after years of every running being informally announced as “the last Grand National,”  the bookmakers Ladbrokes came to the rescue in 1975 – at least temporarily to the rescue, as they had committed to a seven-year-lease of the course, which would provide time to work out a permanent solution.

With John Hughes as clerk of the course, the quality of the Grand National day undercard was considerably improved in 1977 with the introduction of a race now called the Aintree Hurdle. That first running produced an unforgettable dead-heat between two of the great hurdlers of the post-war era, Night Nurse and Monksfield – an amazing race that would have received much more attention in the non-racing press had it not been trumped by the very next race: Red Rum’s third Grand National.

In 1982, a public appeal was made to rescue Aintree, and eventually the course came into the safekeeping of the Jockey Club, under the umbrella organisation Jockey Club Holdings Trust (now Jockey Club Racecourses).

Reaching a safe haven triggered the transformation of Aintree, most visibly in terms of its infrastructure. The dilapidated old stands started to be replaced by modern facilities, including the Queen Mother Stand, opened in 1991 alongside the old and elegant County Stand, and the Princess Royal Stand, opened in 1998 to replace the old grandstand. And that process of resurrection reached its summit with the opening of a new weighing room and winner’s enclosure in 2006, and a new Earl of Sefton Stand and Earl of Derby Stand in 2007. 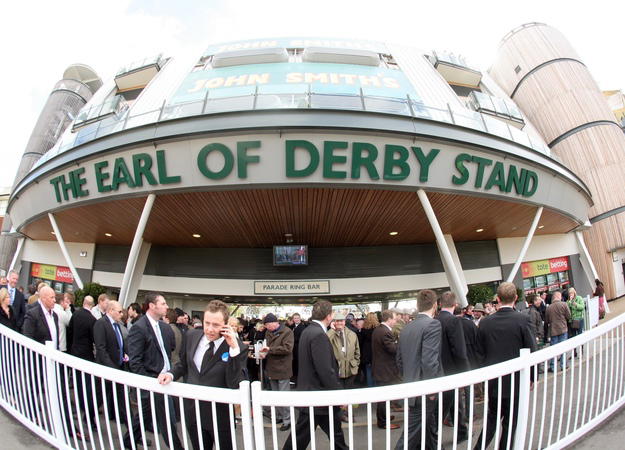 That sense of renewal was mirrored in the racing programme. The Grand National meeting was rapidly built into a three-day fixture second only to Cheltenham as a British festival of jump racing. In 1992, the once-popular November meeting, which had been dropped two decades earlier, was reinstalled and is now a high-class fixture with the Becher Chase as the highlight over the Grand National fences. And the overall fixture list increased, to the point where eight days of racing are scheduled for 2014 (including evening meetings in May and June).

Today’s Aintree is light years from the gloom-laden days of the early 1970s. A very special cocktail of compelling history and shining modernity make it one of the best-appointed racecourses in Europe.

The Grand National has long exerted a magnetic power on racing people across the globe, men and women who have fallen under the spell of an unmatchable equine event.

In terms of overseas challengers, the Irish are much the biggest overseas players – not only the horses, but also the jockeys, trainers, and owners. There have been 24 Irish-trained winners in the history of the race, including this century Papillon, Monty’s Pass, Hedgehunter, Numbersixvalverde, and Silver Birch.

Among the further-flung nations that have woven their threads into the gilded history of the Grand National are:

France: Two French-trained winners in the 19th century, and several French-bred winners, most recently Mon Mome in 2009 and the grey Neptune Collonges in 2012;

Czechoslovakia and the Czech Republic: have challenged for the National on several occasions, and the home of the Velka Pardubicka race that is considered even more hazardous than its Aintree cousin;

Russia: had Grifel and Reljef running in 1961 – neither got round;

Spain: represented in seven runnings by the extraordinary amateur rider the 18th Duque d’Alberquerque, who finally got round in 1974, when eighth behind Red Rum and L’Escargot;

Australia: the great Australian chaser Crisp so nearly won in 1973, but was caught on the line by Red Rum (to whom he was conceding 23 pounds of weight) after making most of the running;

But arguably, the most fascinating overseas thread has been that of the U.S., with American-owned and American-bred horses making their mark since the early 20th century. Jock Hay Whitney had no fewer than 14 runners and never won, though he finished runner-up with the great Easter Hero in 1929 and third with Sir Lindsay in 1930 and with Thomond in 1934 and 1935.

F. Ambrose Clark (or strictly, his wife, to whom he had sold the horse for one pound for luck) won with Kellsboro’ Jack in 1933 and Marion Du Pont Scott – wife of actor Randolph Scott – with Battleship in 1938, while Hollywood was later represented by Gregory Peck, who had Owen’s Sedge in the 1963 race and who finished third with Different Class in 1964 – when winner Team Spirit was part-owned by Americans Ronald B. Woodward and John K. Goodman.

The 1965 running brought even greater transatlantic glory with the U.S.-ridden and-owned dual Maryland Hunt Cup winner Jay Trump, ridden by American amateur Tommy Crompton Smith. Other US-owned winners include Sergeant Murphy, who at 13 in 1923 was the oldest horse to land the race in the twentieth century as well, as the first American-owned winner;Raymond Guest’s L’Escargot in 1975; Ben Nevis (ridden by American amateur Charlie Fenwick) in 1980; Mr Frisk (1990); and Papillon (2000).