For lovers of racing, little compares to an afternoon (or evening) at the track. The sport is best experienced in the flesh, and the world’s race courses offer diverse ways to enjoy this pursuit. While we can’t literally transport you to the races, we’ll do our best to bring these tracks to you in a monthly series of profiles. Today, Sean Magee concludes his five-part report on Aintree, home of tomorrow’s world famous Grand National, with a look at what the racegoer can expect to find on its biggest race days.

THE LADIES OF LIVERPOOL

The Grand National meeting has a social dimension all its own. An aggregate of more than 150,000 people attend Aintree during the three days of the April meeting.

Attendees’ dress requirements come well short of the morning dress required in the Queen’s Stand on Derby Day or the Royal Enclosure at Ascot. Yet, the National meeting still illustrates the distinctions between the different racing tribes, for it attracts, on the one hand, the traditional jump racing people in their tweeds and trilby hats; and on the other hand, tens of thousands of locals, with whom the fixture is wildly popular, the day of days when they let their hair down – and then some. 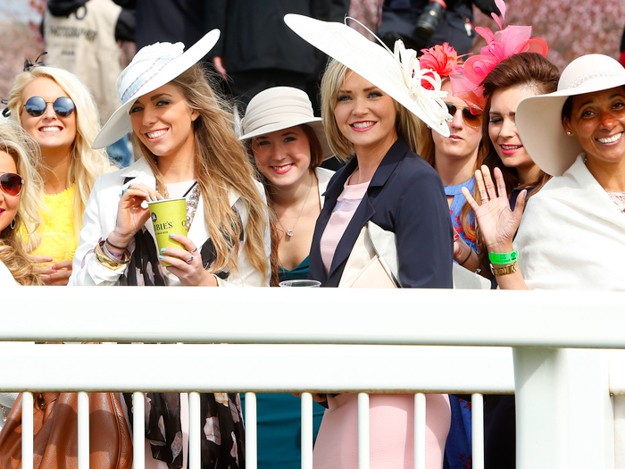 Most striking of all, Aintree is a showcase – a catwalk even – for the Ladies of Liverpool. This phenomenon is well described by former jockey Mick Fitzgerald, who rode Rough Quest to win the 1996 Grand National:

“Each day of the meeting has a tremendous buzz – and not just on the racecourse itself. On all three days, and especially for ‘Ladies’ Day’ on the Friday, the girls of Liverpool turn out in their finest attire – often, it seems, with the aim of wearing as little as the bounds of decency will allow. This is early April and the weather can be extremely changeable, but the Ladies of Liverpool defy the elements with a spirit and determination wondrous to behold. I remember that a few years ago, the Friday brought a combination of freezing temperatures, hurricane-strength wind, and steady rain, and yet the bikini competition was still oversubscribed. Those girls – and their guys – know how to enjoy themselves to the full, and the increasing involvement of the locals produces plenty of fine sights and is one of the big factors in how the Grand National meeting has grown in the last few years.

“The Grand National jockeys annually doff their caps to the Liverpool ladies in their indescribable splendour, who regardless of conditions make those three days a never-ending and never-to-be-forgotten fashion parade. Somebody must have told them that they won’t need a coat, and that the way to combat cold and wet is the rapid and regular ingestion of alcohol. Whatever their tipple of choice, they add such a great buzz to what from the racing standpoint is already a fantastic meeting in its own right.”

But a fashion parade brings risks of its own, and the racecourse now provides an unusual service, as reported in the Liverpool Echo: “A crack team of stylists is on hand at Aintree to help racegoers deal with fashion disasters, including smudged make-up, snapped heels, and windswept hair. A fashion first-aid tent, prepared for any weather, is being run by [clothing retailer] Matalan.”

For those racegoers who prefer crowd-watching to horse-watching, Aintree on Grand National day is a very special experience.

STATE OF THE PLATE...AND GLASS

At the Grand National festival meeting, all manner of food and drink is offered to hungry and thirsty racegoers. There are 80-odd bars around the course, 800 metres of temporary bar counter (90 metres in one temporary marquee alone), and nearly 40 mobile catering units. Between them, these serve something to suit everyone’s taste, including the ubiquitous burgers, hog roast (apple sauce and stuffing optional), beef rolls (with horseradish or mustard or neither), bacon rolls, jacket potatoes, pies, Cornish pasties (all sorts of versions, with the Large Traditional a particular favourite), fish and chips – and more exotic fare such as noodles – and vegetarian options, too, if you can find them.

For those requiring a less hand-to-mouth eating experience, Aintree has no fewer than 11 restaurants at the festival meeting, five of which are temporary structures. The kitchens serving these facilities produce 3,500 rumps of English lamb and 3,500 smoked haddock and pea risotto cakes, and the accent is on locally sourced fare: mushrooms from Ormskirk, potatoes from Cheshire, chicken from Shropshire.

In addition to the food in the public restaurants, some 11,500 hospitality meals are served up over the three days.

To wash that food down, it is estimated that over the three-day meeting the crowd will get through: 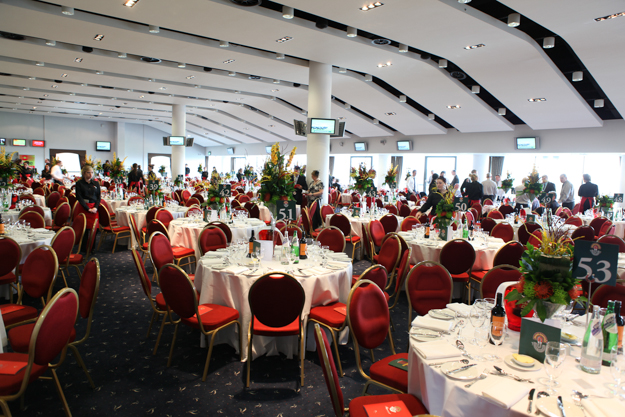 The redevelopment of Aintree has done more than give the tired old course a fresh face. It has found a new use for some existing structures: The old weighing room and roofed winner’s enclosure, which made it look as if the Grand National winner was coming into some huge garden shed, is now the Winners’ Bar. This currently houses many items from the Grand National’s museum collection, which sadly was unable to find a permanent home after the modernisation programme had been completed. Various pieces of National memorabilia are housed in different parts of the racecourse – such as the old weighing scales, saddles and bridles, and many sets of jockeys’ colours in the Winners’ Bar.

The new racecourse buildings incorporate some of the most acclaimed sporting architecture anywhere in the world. 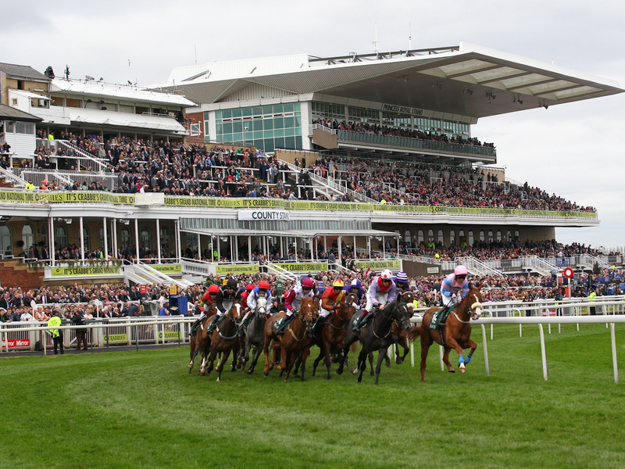 The enclosures in use vary, but on Grand National Day, the main venues from which to watch the race and wallow in the Aintree experience include:

Situated on the slope by the first fences in the Grand National and offering a unique view of the great race, but no access to the parade ring.

Access to parade ring viewing and the Red Rum Lawn (where the statue of the triple winner is now situated), plus an Irish bar and live music in the Aintree Pavilion; viewing from the sloped Mound.

Viewing from temporary – but covered – seats; own bar.

Near the winning post, and thus enjoys fine views and is much sought after; includes bars and lounges.

Closer to the winning post than the Princess Royal Stand; traditionally the main stand at Aintree, and retains much of its earlier character.

Billed by the racecourse as being “at the heart of the racing action, with the winning post directly opposite;” also close to parade ring, winner’s enclosure, etc.

Earl of Derby Stand and Earl of Sefton Stand

Situated at the corner of the track where the National runners set out on their second circuit, Aintree’s newest stands are state-of-the-art structures that not only provide spectacular viewing for up to 6,500 people, but were designed to add to the theatre of the occasion by incorporating a “triumphal arch” through which the runners leave the parade ring before the race, and the winner returns in glory afterwards.

Designed by the eminent architectural practice BDP and opened in 2007, a year after the new weighing room area, the twin stands – characterised by their use of zinc and larch cladding as well as glass – have been acclaimed within architectural circles. Paul Roberts and Isabelle Taylor write in their book Racecourse Architecture (2013) write:

“The arresting materials and theatrical forms of the exterior of the two stands have transformed Aintree’s physical image. They demonstrate the employment of an unusual, bold design in capitalising on the potential of architecture to promote a course and an individual sporting event … Courses such as Ascot, Goodwood, and Aintree are in competition not only amongst themselves, but with major sporting destinations such as Wimbledon or Lord’s Cricket Ground. A distinguished physical setting can be a proficient way towards gaining the edge.”

Aintree engages a team of “Racemakers” to help racegoers who need information or guidance about facilities, directions, etc. – everything except the identity of the next winner – based on the model of the Gamesmakers who proved such a successful idea at the London Olympics in 2012.

Aintree is a racecourse on an unusually large scale, and when the Grand National runners are a mile away from the stands it is difficult to see the race in any detail, even with powerful binoculars. So, the extensive provision of big screens showing the action is a vital aid.

Viewing races on the Mildmay Course is much easier. For a special treat and to feel the essence of the Grand National course in the raw, racegoers get as close as they can to the Chair Fence, right in front of the stands.

For those wanting a punt, Aintree has plenty of representation from all the regular betting options:

Aintree is about six miles north-east of central Liverpool, very close to where the M57 and M58 motorways meet. Thus, the course is easily accessible from the major motorways of the north of England, including the M62 and M6. Parking is best booked in advance.

Aintree is easily accessible by train or bus from central Liverpool; and by taxi from John Lennon airport, about 20 minutes away.

By pre-arrangement with the racecourse.