For lovers of racing, little compares to an afternoon (or evening) at the track. The sport is best experienced in the flesh, and the world’s race courses offer diverse ways to enjoy this pursuit. While we can’t literally transport you to the races, we’ll do our best to bring these tracks to you in a monthly series of profiles. Today, on day three of our five-part look at Aintree, home of Saturday’s Grand National, Sean Magee describes the  reason - or, to be more precise, the 30 reasons - why it has the most famous and possibly the most formidable track in the world.

Put simply, the Grand National course is flat, left-handed, two-and-a-quarter miles long (the longest circuit in British racing), and contains 16 obstacles, 14 of which are jumped twice, thus making 30 fences in all in the race distance of 4 miles 3½ furlongs (the longest horse race in Great Britain). The National parlance that describes the field going “out into the country” after the start and back onto the “racecourse proper” after the 12th and then the 28th fences reflects the earliest days of the race. 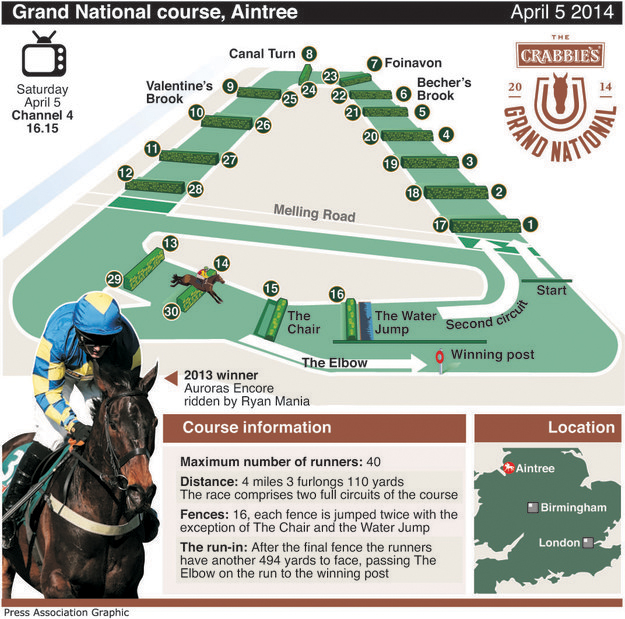 Reading from the Grand National start, to the right of the stands, and adopting the order the obstacles are jumped in that race, the course starts with a straight stretch containing six fences:

Named in memory of Steve Westhead, one of Aintree’s longest serving fence-builders.

Named after Captain Martin Becher, who was catapulted into the brook in the 1939 running by his mount, Conrad, who had been leading at the time 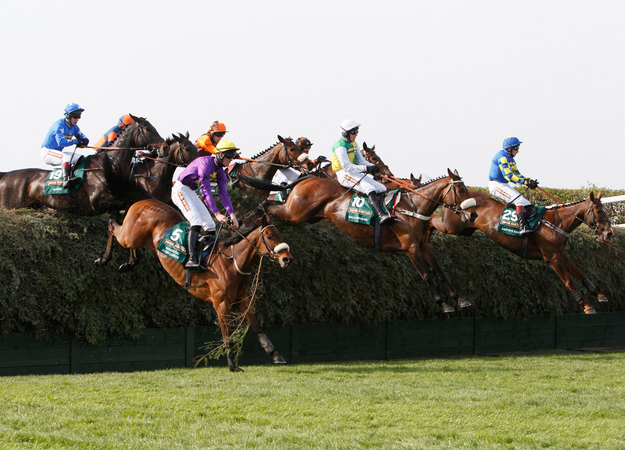 Immediately after Becher’s Brook the course heads off to the left, to: 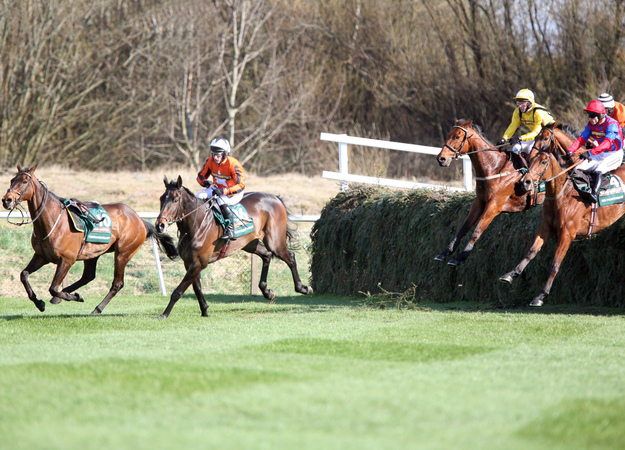 9 - VALENTINE’S BROOK - Fence 5ft high, with brook – continuation of the same brook as Becher’s – on the landing side

Named after a horse called Valentine, who made an extraordinary  corkscrew jump here in the 1840 race.

12 - Fence 5ft high, with ditch on landing side

The name refers to the chair where the distance judge would sit when races were run in heats in the 19th century. The judge would declare that a horse who had not reached his position by the time the winner passed the winning post had been “distanced,” and was not eligible to go through to the next heat. 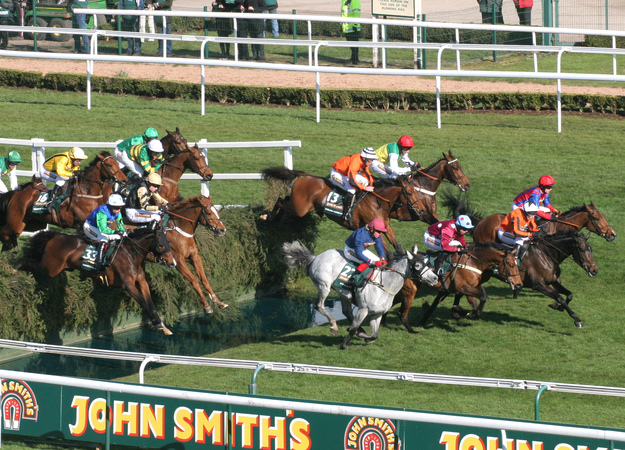 Those Grand National runners who have survived to this point then swing left to address – for a second time – the straight toward Becher’s Brook, so that the first fence becomes the 17th, Becher’s Brook becomes the 22nd, Foinavon fence 23rd, Canal Turn 24th, and Valentine’s Brook 25th. The Chair and water jump are not taken on the second circuit, so the fence that was No. 14 on the first circuit becomes the 30th and last fence on the second.

Approximately halfway up the run-in from the last fence towards the winning post – at 494 yards one of the longest in British racing – the runners pull right to avoid jumping the Chair Fence, and come round “the Elbow,” roughly a quarter of a mile from home.

Apart from the fences and the Elbow, the other phrase that instantly evokes the magic of the Grand National is “the Melling Road” – the road between the villages of Aintree and Melling, which intersects the racecourse before the first fence and the 13th.

The history of the Grand National fences is worth a monograph in itself, and controversy over whether they are too dangerous has dogged the race from the beginning. In 1839 – which, depending on your point of view was or was not the first running of the race – the Liverpool Mercury printed a post-race editorial that declared: “It was no doubt a very exciting spectacle, but we no more be reconciled to it on that account than we are to cockfighting, bullbaiting or any other popular pastime which is attended with the affliction of wanton torture to any living being.”

In response to such views, the stone wall in front of the stands was replaced by the water jump, which remains a feature of the race (though a water jump is no longer mandatory on British steeplechase courses), while in the modern era, a major change came in 1961 with the introduction of sloping “aprons” to help the horses’ sightlines when taking off. All sorts of modifications have been made to Becher’s Brook to minimise the danger but retain the character, while for the 2013 Grand National, the majority of fences on the circuit were completely rebuilt using plastic rather than timber cores to lessen the chance of injury.

As well as the National course, Aintree has another course, the Mildmay, the modern version of which is on the same ground as the original Aintree Racecourse. It is a left-handed circuit, just shorter than 1¼ miles, with the steeplechase course inside the hurdle course. The final two bends are tight, which favours the fast, nippy type of horse.

Tomorrow: The star-studded race programme at the Grand National Festival