Saratogians are proud of the Travers Stakes. Most of the thousands of fans who show up every year probably don’t know that the race was first run in 1864, or that it was named for one of the men who established Saratoga Race Course; they do know that the day of the Travers is something of a local holiday, an excuse for reunions in the backyard at the track, an opportunity to reminisce about Travers past, about big scores and bad beats.

This year, they might know this Travers is the 150th running of the race named for William Travers, because the New York Racing Association, which runs Saratoga Race Course, has stepped up to recognize and promote this milestone, one that only two races in North American can claim. (The other is the Queen’s Plate in Canada.)

This year’s Travers Stakes is sponsored in the name of Runhappy, the stallion whose owner has spent the last two years blanketing racecourses in the horse’s name and colors; its official name, forever in the history books, will be the 150th Runhappy Travers.

In a turn of events that would cause today’s cynical horseplayer to cry foul, the first Travers Stakes, run on August 2, 1864, was won by Kentucky, a horse owned by none other than the man for whom the race was named. It garnered only brief mentions in both The New York Times and the local Daily Saratogian.

Fast forward to 1919, the 50th running of the Travers, when Hannibal’s win was trumpeted in the page-wide headline below in the Times, an indicator of not only the prominence of the race, but of horse racing in the United States.

The not-quite-correct nickname ‘The Mid-Summer Derby’ (sometimes ‘Midsummer’) has, in the wake of the blockbuster that is the Kentucky Derby, at times come across as a bit of wishful thinking, or perhaps of hyperbole. 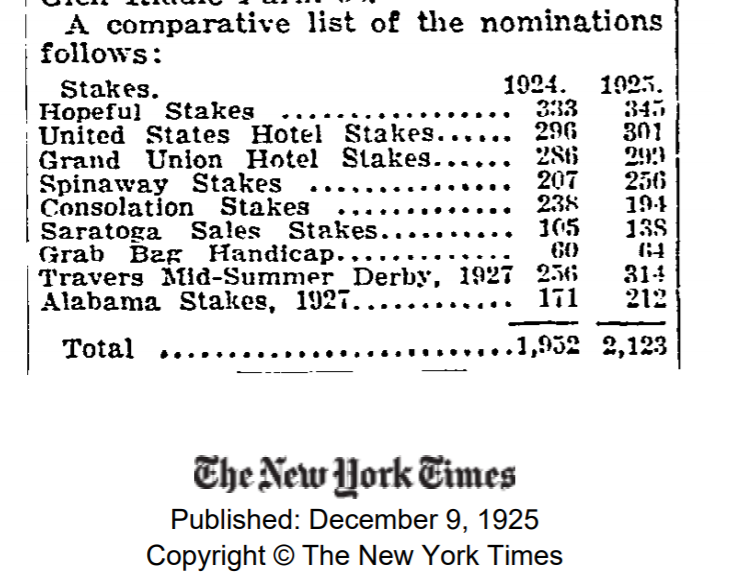 But a glance at this 1925 New York Times suggests that, at one point, it may have been more than a nickname.

By the time 1969 rolled around, both local and national papers acknowledged the 100th running Travers. In honor of the anniversary, NYRA boosted the purse for the race from $75,000 to $100,000, a pleasing development for the connections of Arts And Letters, who romped to a 6½-length win en route to being named that year’s 3-year-old champion. 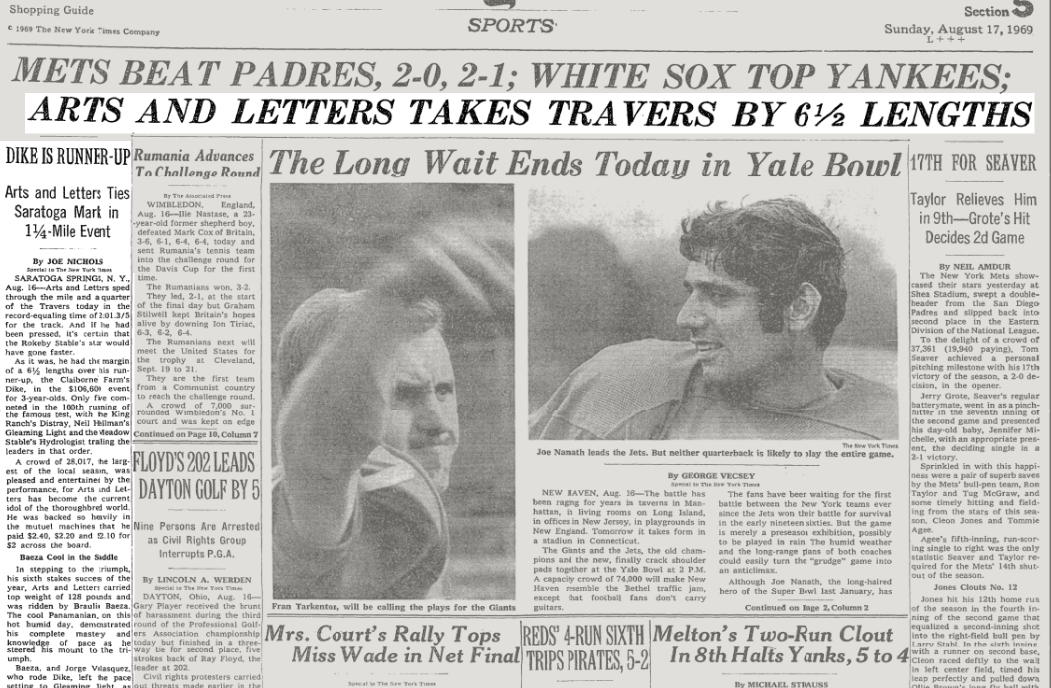 Through the many processes for determining Thoroughbred champion dating back to 1871, 37 Travers winners have gone on to earn that distinction as sophomores, including six this century, most recently West Coast in 1917. Sixteen of those champions are in the Hall of Fame.

As the emphasis in racing has shifted to the Triple Crown races and the Breeders’ Cup, as the purses and prominence of the Haskell Invitational at Monmouth and the Pennsylvania Derby at Parx have increased, the prestige of the Travers has perhaps dipped; trainers and owners have other options, and when the winners of the Triple Crown races pass on Saratoga’s signature race — as they have this year — one might wonder whether the race has lost some of the lustre that led to those banner headlines of years gone by.

“Outside of the Triple Crown races, the Travers is the best race in the country to win, especially if you’re into racing history, and I love the history of horse racing,” said trainer Dale Romans, whose Keen Ice beat American Pharoah in the 2015 Travers and whose Everfast is expected to run this year. “To be a part of that race is a great honor. It puts you in the top-shelf group of people in the sport that I love.”

“The Travers is the highlight of a meet full of highlights,” said Richard Migliore, the retired jockey who now works as a racing analyst on NYRA broadcasts. “The Travers always meant more to me than the Kentucky Derby. I’m a native New Yorker, and Saratoga to me embodies everything good about Thoroughbred racing.”

Standing on the ground floor of the Saratoga clubhouse, Todd Pletcher, who’s won a big race or two, lit up as he recalled his first Travers win, with Flower Alley in 2005.

“I don’t care what year it is,” he said. “Winning the Travers any year is special.”

He’s started almost 21,000 horses, but he remembered every moment of the race, what Flower Alley was doing, what Bellamy Road was doing, what he and jockey John Velazquez had talked about. He grinned, he gesticulated, he shifted as he played out the dynamics of the race.

This Saturday (August 24) Saratoga Race Course will be packed. These days it’s passé to have just one Grade 1 race on an afternoon, so the card will be stacked with top-notch races in yet another of the Big Event days that have become de rigeur.

But make no mistake: the tens of thousands of people that will show that day are coming for one reason, and one reason only: the Travers Stakes.