This weekend, Royal Randwick will celebrate 150 years of its flagship staying race, the Sydney Cup. Jessica Owers delves into the earliest origins of the race, when Randwick was surrounded by sand hills and there was no such thing as a five-furlong sprint.

John Lackey was a young man in 1866. He had vineyards and cattle in Sydney’s rural west, was a one-time hotelier and downtown magistrate, and was a jovial, succinctly spoken, colonial-born gentleman. At just 35 years old, he sat in the upper house of state parliament, with one eye on Sydney’s affairs, and the other on Randwick Racecourse. Lackey was a judge and handicapper for the Australian Jockey Club (AJC), charged that year with the weights for the very first Sydney Cup. 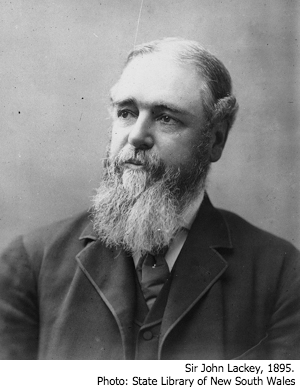 There were 23 horses nominated. They included the cracks Tarragon and Volunteer, right down to the obscure lightweight Angler. In the middle, a mottled collection of stayers that had Bell’s Life thoroughly confused.

“I do not think that such a bizarre lot of horses were ever put together with so good a chance of bringing out a good field as those for the Sydney Cup 1866,” said the newspaper.

Lackey had a task before him. He was expected to create an upstanding handicap that would establish the Sydney Cup as an autumn institution, guaranteeing large fields into the future, and also a good spectacle. The AJC, only six years at Randwick, was plumping up its calendar. It had brought from its former location at Homebush the AJC Derby and St Leger Stakes, two races that were destined to become long-running Australian classics. But in 1866, the famous Doncaster mile was added alongside Lackey’s Sydney Cup.

The inaugural Cup was worth 200 sovereigns, added to a sweepstakes of 20 sovereigns each. The trophy, a small, elegantly fashioned gold cup, was worth a further 150 sovereigns. The race would be run over two miles, a distance that has never changed in its 150-year history, and it would occur on the second day of Sydney’s autumn carnival: May 3, 1866, a Thursday.

Among the 23 horses on Lackey’s list was an attractive, nut-brown animal of average Thoroughbred height. He was called Yattendon, a 4-year-old by the boom colonial sire Sir Hercules. Yattendon had wonderful legs but terrible feet, often racing in leather booties, and he was an antsy, ornery sort of fellow in the box. But he had won the AJC Derby the year before, along with the 2-year-old Champagne Stakes. Lackey didn’t consider him on the same peg as Tarragon, who got 68 kilograms (10st 10lbs in those days) for the Sydney Cup, but Yattendon was good enough to get 62.6 kilograms (8st 4lbs). 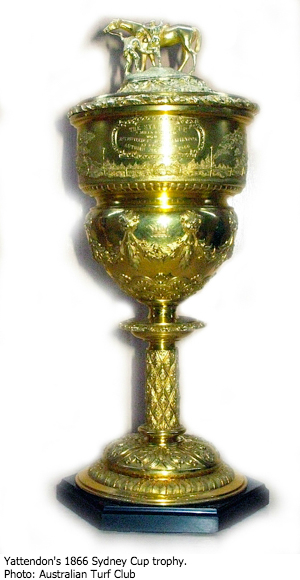 By the records, May 3 was a temperate, typical autumn day when a field of 13 faced the flag for the Sydney Cup. Volunteer hadn’t made it, but Tarragon had, and he became the race’s very first favourite at 5-1 in early betting. At the jump, he shared the spot with Yattendon. But at the judge, Yattendon was a length clear of them all, claiming the very first Sydney Cup under the natty, 51-year-old Englishman Samuel Holmes. They ran the two miles in 3 minutes 43 seconds.

That Yattendon won the inaugural Sydney Cup could only be appreciated years later. He proved a brilliant racehorse, but he was a priceless stallion. He produced grand Australian heroes such as Chester and Grand Flaneur, while his influence on the Sydney Cup was immense. In 1873, his daughter Vixen won it (she also won the Doncaster), while his granddaughter Lady Trenton won in 1894. Through Chester came the 1892 winner, Stromboli, and through Grand Flaneur came Patroness, who won in 1895.

In fact, the influence of that first Sydney Cup on later Sydney Cups is little recorded. As Yattendon carved out his bold footprint, so also did Tarragon, who sired the race’s 1876 winner, A.T. The 1881 winner was a horse called Progress, by Angler, the same Angler that ran fourth to Yattendon. And, the colonial origins of the Sydney Cup are further stamped by the fact that Sir Hercules sired four of the race’s first five winners.

These were marvelous days for Australian racing, an era that loosely dropped names like The Barb and Bylong. They were days when a trainer didn’t need a license, when a jockey rode without one, and a horse might have run between shafts in the early morning, and in champion races in the afternoon. But they didn’t last. Racing became regulated and shuffled towards 1900, and with it, a defiant, blossoming Sydney Cup.

The race had very quickly become the premier staying event of the autumn. In its first decade, it boasted Melbourne Cup-winning The Barb, who won in 1868 and 1869. Then came another dual winner in Carbine, in 1889-1890. There followed the enduring turf stars Highborn, Wallace (a son of Carbine), and La Carabine (a daughter of Carbine). Post 1900 there was Wakeful, Lord Cardigan, and Trafalgar. In other words, Australia’s best and brilliant visited the Sydney Cup each autumn.

From the 1920s, there began a subtle shift in the race’s honour roll. In that decade, Eurythmic and David won, but the age of the great colonial stayer was dying. In 1933, the top weight-for-ager Rogilla won the race, a unique horse for being the only winner of the Caulfield Cup-Sydney Cup-Cox Plate triumvirate. But 1933 is a good example of what was slowly happening to the Sydney Cup. Peter Pan, that era’s glittering stayer and nigh unbeatable over two miles, didn’t tackle the race in four seasons of competing (nor did Phar Lap). Peter Pan was a two-time Melbourne Cup winner, but he was handicapped right out of the Sydney Cup each autumn, so he never contested it. 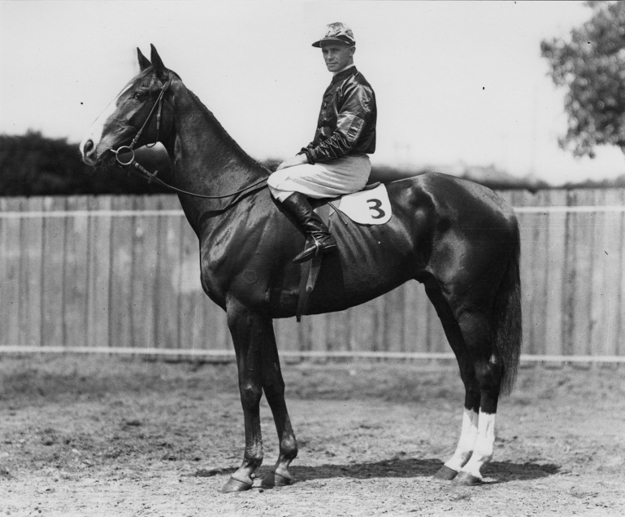 That there is a relationship between the famous staying events of both Sydney and Melbourne is obvious, although in 150 years, there have been only five horses that have won both the Sydney Cup and Melbourne Cup. They are The Barb, Carbine, Lord Cardigan, Galilee, and Makybe Diva. Only Carbine and the Diva, however, have managed to do it in the same calendar year.

Slowly, Australian racing drifted away from the great staying contests, breeding towards the short-course Thoroughbred. It might have begun with the arrival of Star Kingdom in 1952, or the creation of the Golden Slipper in 1957. Though the Sydney Cup still boasted extraordinary winners every so often, in particular Galilee in 1967, Reckless in 1977, Kingston Town in 1980, and dual winner Tie The Knot in 1998-1990, it fell off the radar significantly. Not even Makybe Diva, a winner in 2004, could resuscitate public interest.

“The Sydney Cup was a flagship race, and a very important race for the Australian turf,” said Bob Charley, historian, author, and trustee of Royal Randwick. “But it slipped over time and lost some of its lustre, as did all the two-mile races in Australia, with the exception, of course, of the Melbourne Cup.”

Charley cites the Brisbane Cup as an example, a race that was shortened in 2007 from two miles to a mile-and-a-half. He said the Adelaide Cup, though retaining its distance, was downgraded to a G2 the same year.

“From the emergence of the Golden Slipper, and the preponderance of breeding for speed, came the result that staying races in Australia were diluted,” he said. “It’s only the recent emergence of mainly European blood, and in that I mean horses that have come here from overseas and proved that they are better stayers than ours, that has made people start thinking about breeding again for staying types. That consequently will have a beneficial effect on races like the Sydney Cup.”

Charley is well into his 70s these days, and has forgotten more about racing history than most will ever know. He has stout memories of Sydney’s great race, like the year Sharply edged out the mighty Tulloch, in 1961. He says the creation of The Championships, and the elevation of the Sydney Cup’s prize money to $1.6 million, has pushed the race back into the limelight after decades of playing second fiddle.

“There’s every indication that the race is perhaps on the improve,” he said. “The arrival of interstate, and particularly overseas, horses attracted by the prize money of The Championships, may have the effect of lifting the status of the Sydney Cup again, despite the fact that it is not what you would call a richly endowed race compared to other races on the carnival. But it nonetheless will benefit by the aura of The Championships, and by the horses that The Championships are attracting.”

Saturday’s race is a big one. It will be the 150th running of the Sydney Cup, a race that has doggedly kept its two-mile status, its G1 tag, and its place in Sydney’s autumn. It will boast a very respectable field. Godolphin’s ritzy import Hartnell is the favourite, getting six kilograms from top weight Protectionist, while one-time entrant Red Cadeaux has opted for the rich Queen Elizabeth Stakes. And, unlike the very first Sydney Cup, the spread in the weights is minimal: four kilograms, as against 25 kilograms in 1866.

And that brings us back to old Yattendon. He left the turf in 1867, winner of 11 races from 17. He never raced outside of Randwick. He became a champion stallion at the Royal Agricultural Society’s Easter show, storming the show ring for five straight years before growing into a corrugated old horse at Fernhill. He died in May 1880, arguably the greatest Sydney Cup winner of them all.

In 1923, the Australasian newspaper was still ruing his loss.

“We could do very well with another Yattendon or two at the present time to counteract the flood of soft, flashy blood that has almost swamped the studs of Australasia,” it wrote.

They could very well have been writing about today.