It was a common sight, hanging on the wall of nearly every pub, tavern and corner saloon across America from the 1940s right up to the 1970s. A photo depicting three horses in a perfect line. The date across the top read June 10, 1944, four days after D-Day. The place was New York’s Aqueduct, and the race was the 46th running of the Carter Handicap.

It was the first and thus far the only triple dead-heat in a stakes race in America. The first photo finish camera was used at Bay Meadows racecourse in Northern California in 1934. Prior to that, the order of finish was determined by the eyes of judges stationed on a platform above the finish line.

The Carter was first run in 1895. The race was named for William Carter, a contractor and tugboat captain who had put up the majority of the prize money.

Handicaps are meant to theoretically bring horses of different abilities together at the wire by issuing them different weights. A master of this profession was John Blanks Campbell, who as the official handicapper at all the New York tracks, set the weights for the Carter.

A field of nine participated. Let’s learn a bit about them:

A homebred who raced in the white with red polka dots of William Woodward Sr’s Belair Stable, Bossuet was foaled in 1940 and was trained by James ‘Sunny Jim’ Fitzsimmons. He was by Boswell, a St Leger winner. Hall of Famer Jimmy Stout was the jockey. Bossuet was coupled in the betting with Belair’s Apache, carrying top weight of 132 pounds. The entry was the 6/5 favorite. 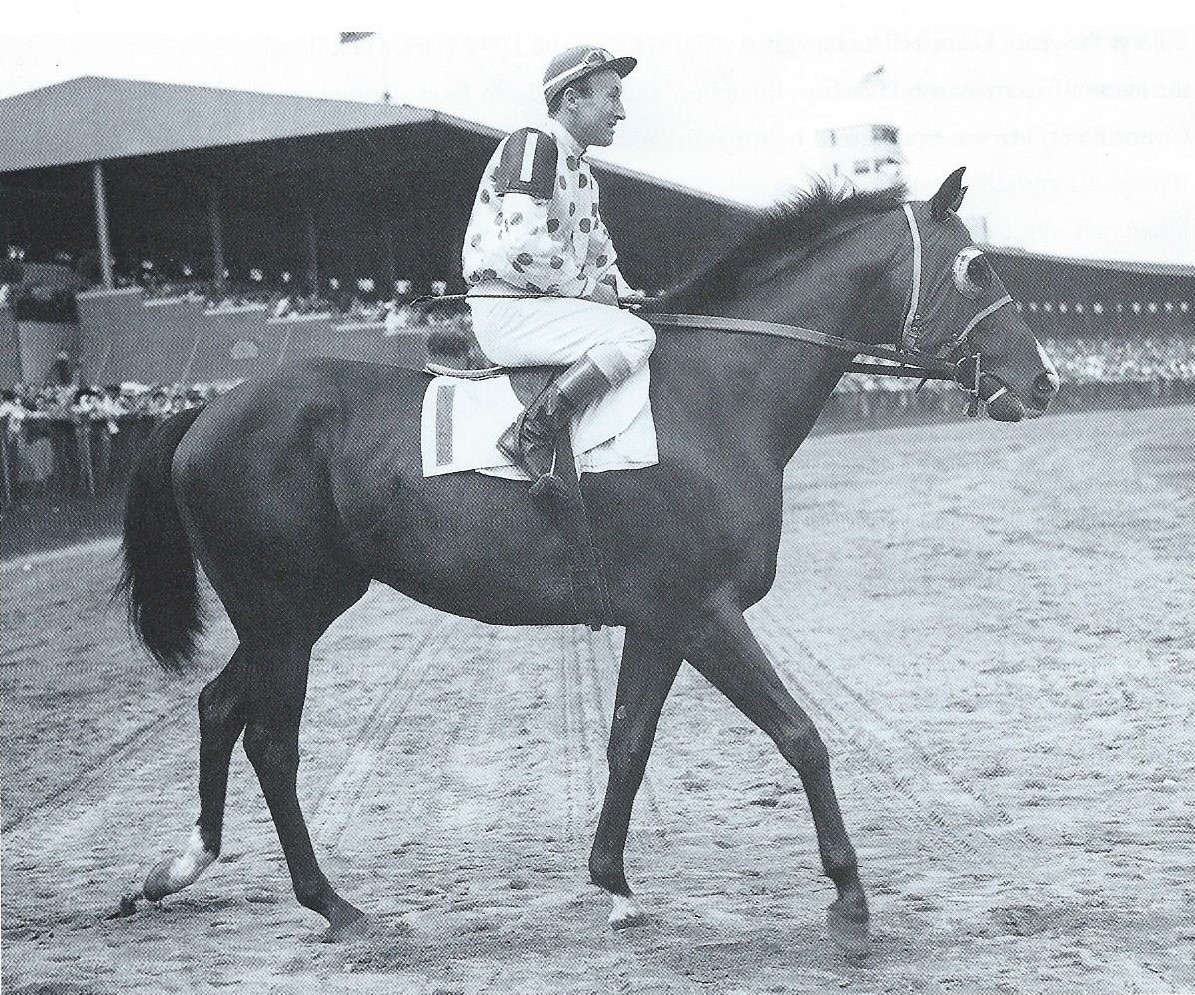 According to esteemed turf scribe Joe Palmer, “Bossuet got his name from a famous French pulpit orator and theological writer of the late 17th century. What interest William Woodward of Belair Stud has in French religious thought of the period is not clear.”

Prior to the Carter, the dark bay Bossuet had won the six-furlong Rosemont Handicap at Belmont on May 19, beating Brownie by three-quarters of a length.

Joe W. Brown’s Brownie, a foal of 1939, was a black son of Cohort trained by John B. Theall and ridden by another Hall of Famer, Eric Guerin. Brownie had won one handicap in 1944, at Jamaica, before lining up in the Carter at odds of just over 10-1. 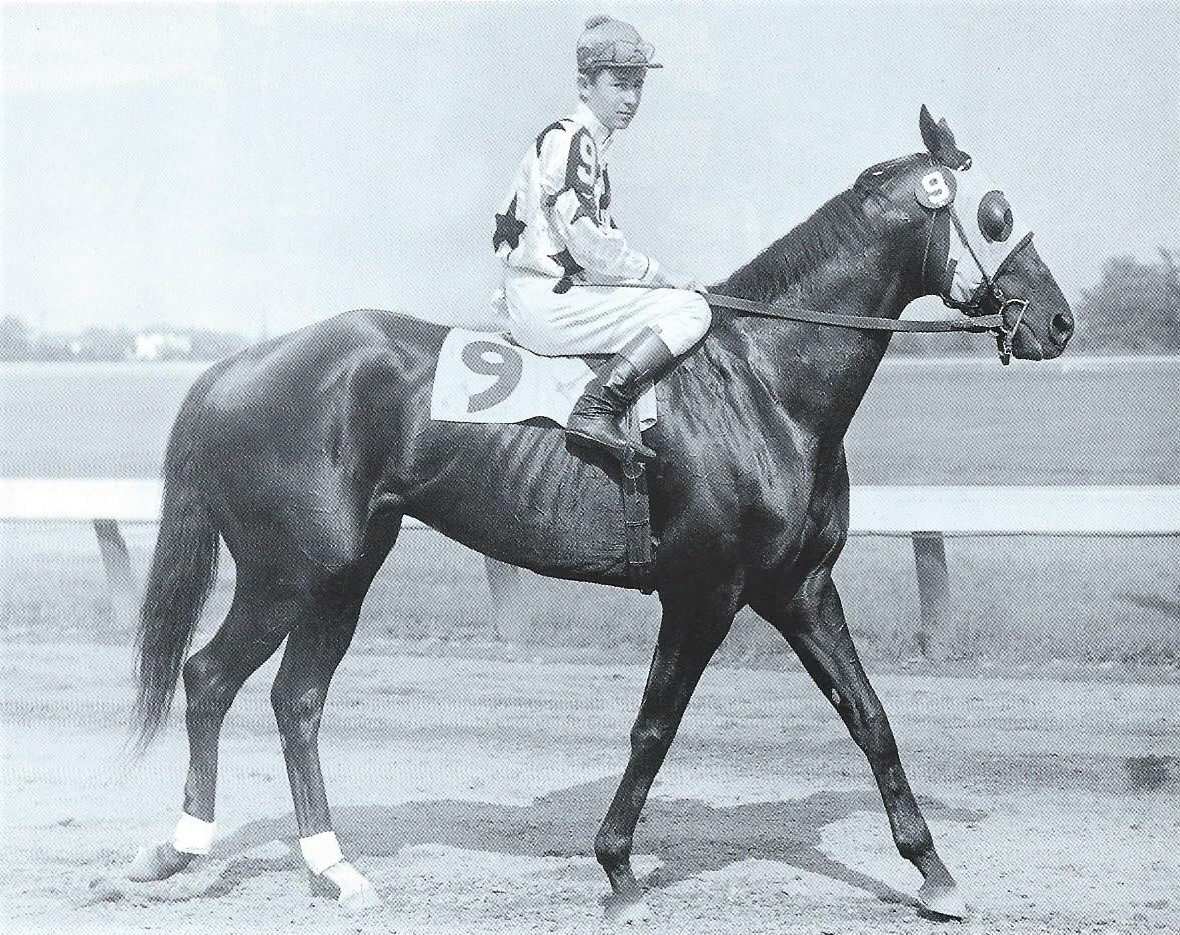 William Ziegler’s chestnut homebred Wait A Bit, also foaled in 1939, was by Espino, a winner of the 1⅝-mile Lawrence Realization and the one mile, six furlong Saratoga Cup. He was trained by Matt Brady and ridden by Gayle Smith, who had won that year’s Belmont Stakes on Bounding Home for the same connections.

Wait A Bit won both the Vosburgh and Bay Shore Handicaps in 1943 and also held the track record, 1.22⅖, for the Carter distance of seven furlongs set in August of 1943. He had been fourth in the Met Mile at Belmont in May. He hovered around 6½/1 at the off. 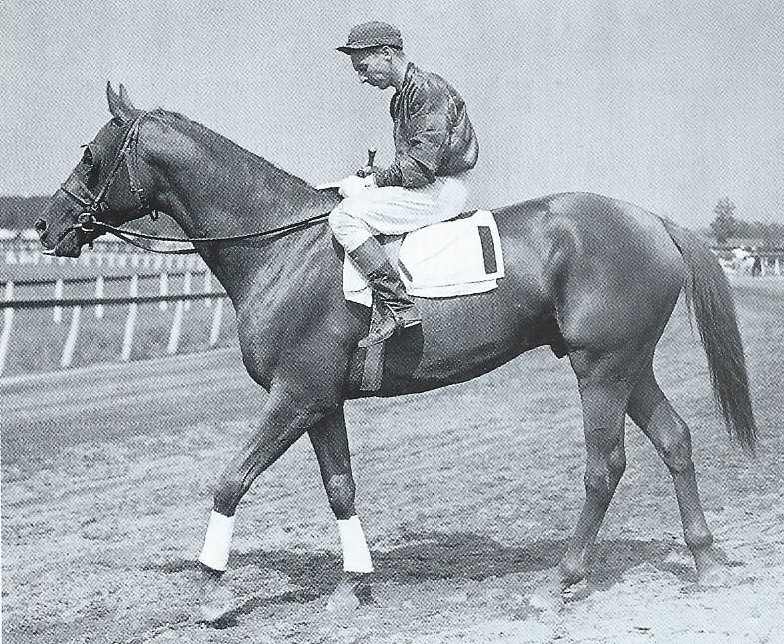 Six-year-old Doublrab, at 12-1, won the Carter in 1942 under 120 pounds, with 1941 Triple Crown winner Whirlaway, hefting 130, back in third. He was third to Devil Diver the following year, and had won the Jamaica Handicap over six furlongs at Jamaica in April and the Governor’s Handicap at Suffolk Downs in May. He had equalled the world record for the seldom run distance of 5¾ furlongs, 1.07⅖, at Empire City in July of 1942.

Alquest, second in the betting at just over 6/1, had won two stakes in April, was second in the Met Mile and third in the Suburban at the end of May, in which Wait A Bit finished ninth. John Longden had the ride.

The headline on the front page of the June 10 Daily Racing Form read ‘Carter Tops Aqueduct War Relief Card’. The Form stated that it was “the third of New York racing’s War Relief Days, when all the net profits will be donated to the National War Fund, American Red Cross and other worthy causes. The first two War Relief days, at Jamaica and Belmont Park, raised $252,766.50, a sum which will undoubtedly be increased by at least another $100,000”.

These ‘other worthy causes’ included three Long Island hospitals. The meeting was conducted under the auspices of the Aqueduct Relief Fund, Inc. and all facilities were turned over for the day by the Queens County Jockey Club.

The eight-race program was headlined by the $10,000 Carter, with two supporting races, the $3,500 Grassy Bay at a mile and five furlongs, and two divisions of the Bay Ridge, over the same seven-furlong trip as the Carter.

The field was dispatched at 4.36 p.m., Eastern War Time. Apache, with Eddie Arcaro aboard, went straight to the lead over the sloppy strip, tracked by Bill Sickle and Ariel Lad. Midway down the backstretch Apache was a head in front of Bill Sickle, with Doublrab on the rail, a neck in front of Ariel Lad, while Brownie, Bossuet and Wait A Bit sat in behind, in fifth, seventh and eighth, respectively.

Rounding the far turn, Bill Sickle was sent to a clear lead over Apache, with Brownie and Ariel Lad a couple of lengths back. Turning for home, Bill Sickle still held the lead, with Apache tiring. Bossuet was coming on and Brownie was gaining on the inside. Wait A Bit was in seventh, but only three lengths behind the leader.

A ‘ding dong battle’ ensued down the stretch, with Brownie and Bossuet drawing away at the furlong pole and Wait A Bit charging down the outside. The Daily Racing Form records it from here: “All three riders drove desperately, with Brownie appearing to have the race at his mercy a few yards from the wire. The other two fought on valiantly to the finish and drew level in the final stride.”

The three hit the line as one: Brownie on the rail, Bossuet in the middle, and Wait A Bit on the outside. 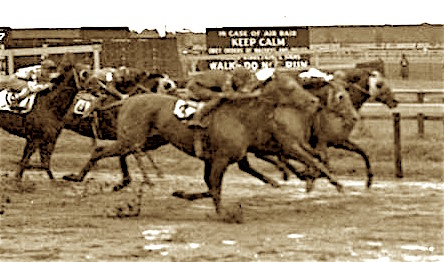 Joe Palmer wrote that the Carter “permitted Handicapper Jack Campbell to add another feather to his cap if he could find room for it”.

Final time was 1.23⅖. The crowd of 25,386 had to wait an interminably long time before the judges finally decided they couldn’t split the triumvirate.

According to the report in the New York Sunday News the next day, “The mutuel payoff was arrived at by dividing win, place and show pools three ways and then dividing each of the nine pots by number of tickets sold on the horse in question.”

There wasn’t enough room on the tote board for all the prices, but this was resolved by a ‘hastily painted hand sign’.

The Daily Racing Form described the post-race scene: “There have been triple dead-heats before in American racing history, but never in New York and never in a stakes race. The roar of the crowd when the announcement was made over the loudspeaker drowned out Fred Caposella’s voice and it was difficult to hear the full explanation of the order of the finish.

“There was insufficient space in the lighted portion of the odds-board to show the win price of the three horses and numerals had to be superimposed to show the pay-off on Wait A Bit.”

Prior to the Carter, there had been only two triple dead-heats for win in Thoroughbred racing in North America, both in claiming races. The first was on September 21, 1940, at Willows Park in Vancouver, British Columbia and the second two years later, on October 6, 1942 at the Detroit Fair Grounds.

Though there have been a handful of them since, the 1944 Carter remains the only triple dead-heat for win in a stakes race in North America.

In his next start, Bossuet just failed to win under 130 pounds in the July 4 Yonkers Handicap, with Brownie fourth. Eleven days later he won the Fleetwing Handicap over six furlongs toting 129 by a length and half over Brownie, with 113. Then on July 22 he won the Valley Forge Handicap at Garden State under 128, with Brownie unplaced, equalling the track record of 1.10⅕.

After the Carter, Brownie was successful in the Princeton and Bay Shore Handicaps. He won eight races in 1944 and was second or third in seven other stakes.

Wait A Bit didn’t win another stakes race after the Carter but was placed in four others, including a second in the July 1 Brooklyn.

Ariel Lad went on to win the Gideon Putnam, Fall Highweight and Interborough Handicaps that year.

Two of the three winners came back in the 1945 Carter, which was won by Apache, who led from start to finish, by a neck over Wait A Bit. Favorite First Fiddle was third, and Brownie fourth in the field of nine.