n the second part of Karen M. Johnson’s interview with Mark Casse, the trainer, winner of two Breeders’ Cup races and nearly $13 million in prize money this season, gives his views on one of the most controversial subjects in North American racing today.

The first part of the interview was published on Thursday, November 19. Read it here.

Why is it important to you that Lasix remains a race-day approved medication?

“When [a stable of our size] has a horse who is a bad bleeder, it would hurt not to have Lasix. But to some stable that has 10 horses, it could be devastating.

“If you have 10 horses, you’re going to be lucky if you can keep seven of those horses running. Now, if you had no Lasix, you might be down to five. You might have two bad bleeders among those 10, and you won’t be able to control it with Lasix. The poor owners have a hard enough time of it now, now you want to add that burden?

“A couple of years ago, we bought a filly in France who had won a Group 3 a week before we bought her. We paid $500,000 for her. The owner said to me, ‘Mark, this filly hasn’t been running on Lasix. I would like to try not to run her on Lasix.’ Okay - fair enough. I had her over here for two weeks, two and a half weeks. The first time I breezed her she gushed from both nostrils. We gave her six weeks off. I brought her back six weeks later and breezed her, and she gushed again. I again gave her more time off, but now I went to working her on Lasix and through Lasix I was able to control her bleeding. I ended up [racing her on Lasix]. But what happens if I didn’t have Lasix?

“Here is a guy who just spent $500,000 on a horse who is supposed to be running in another country that is not supposed to be on Lasix or any type of bleeder medication. But somehow on her plane trip over she became a bad bleeder. I don’t know whether it has something to do with our weather or something to do with the air or something else. But I have a tough time believing that horses don’t bleed in other countries.

“I read so much about how our bettors don’t like Lasix, and that’s all baloney. The recent Daily Racing Form survey would agree with me. I know some of the biggest bettors in North America, and I’ve asked them, and they said, ‘No. We’re more concerned with the on and off Lasix, because if everybody is on Lasix, it’s a fair playing field.’ 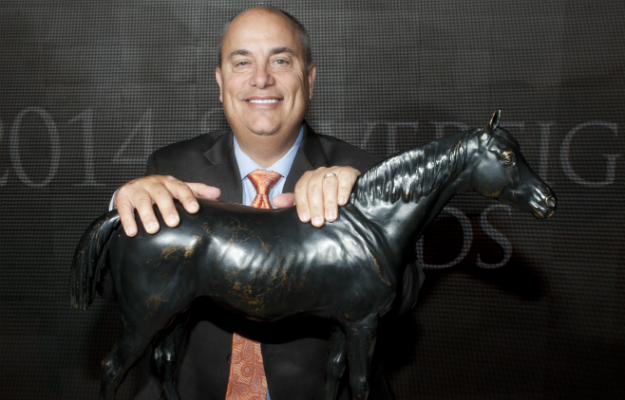 “What’s the old story, we met the enemy and it’s ourself? Give me a break. The people who are pushing for no Lasix have never been in the trenches and they don’t know what it means to train a horse and have one bleed. I’m going to tell you my biggest concern — I was around before Lasix [became legal on race-day], and there are people out there in this world who think if you draw a horse 12 hours — don’t give him hay or feed or water . . . I promise you that if there are people out there thinking 12 hours are good, they’re thinking three or four days might be better.

“The day they come up with a better idea than Lasix, I’m fine with that. But first we have to have it.

“The other thing, to sit and listen to all this nonsense about how Lasix has made our horses not able to run much. There are no statistics that confirm that.”

Do all your horses receive Lasix, whether they bleed or not?

“I do run most of my horses on Lasix, unless I found that they had a reaction to it. Any horse that breezes over a half-mile or more is scoped. We scope every horse after they run also. We probably do a little bit more of investigating [for bleeding] than most.

“Every horse will bleed at some point in time. It might be only 1 out of 5 [on the scale]. I think the more horses run, the more likely they are to bleed.

“Horses are not like us. When we run, we run straight up and down. A horse runs at a high rate of speed, and all his organs go back and forth. As a horse goes forward, all his organs in his body go forward. As he comes back, the organs go back. There is a lot of blood flow, and a lot of pressure that goes back and forth. I’ve talked to a lot of smart veterinarians who tell me they think that is a big reason why horses bleed.

“I do believe running horses on Lasix and not letting them bleed keeps them from bleeding more. I am not going to say that once a horse bleeds, he’s always going to be a bleeder because I’ve seen them not be bleeders. But you definitely don’t want a horse to start bleeding, because once they bleed they are more likely to bleed again.”

If a prospective owner approached you about training horses for him but didn't want you to use Lasix, what would you say?

“I have a belief in that the owner makes the final decision — unless I thought we were going to put a horse’s life in danger. I do a lot of communicating with my owners and I believe in asking them their opinions. If I had an owner who had a strong opinion about Lasix and not running on it, I would grant their wishes. Now, I would keep them informed with what was going on and if it came to a point where I thought not running on Lasix was endangering a specific horse, I would then send that horse home and not run him.”

What are some things you can do to manage bleeding outside of Lasix?

“Obviously, rest is the best thing. The problem is that it isn’t always a cure-all. I’ve have used the hyperbaric chamber, but I haven’t used it in the last four or five years. I guess you could draw some horses [remove feed and water].

“Sometimes you will have a horse bleed on Lasix; I tend with those type of horses to try to train them into their races very lightly. I think a lot of horses bleed internally, even when they gallop, especially the bad bleeders. If I have a bad bleeder, I will jog them into the race for four or five days, versus galloping them. Less exercise.”

What would you say to the people in the industry who believe Lasix acts as a performance enhancer for horses that are not bleeders?

“Well, if that’s the case, if every horse is running on Lasix, then everybody has an equal playing field.

“What I’m so sick of hearing about is that [Lasix] masks other drugs. I don’t believe it at all. I don’t have a problem with the administration of Lasix [by racing jurisdictions]. I like that. I like the surveillance. And you know what, if they catch someone doing something wrong, then go get ‘em.

“I have a problem with [racing authorities] catching the little nit-picking stuff that means nothing; like where I read that Graham Motion had a Robaxin positive. Give me a break. People don’t realize we have these large stables — I’ve gotten to a point where we hardly use any medication because it scares me so much.

“[Therapeutic medication] really has no [place in my operation] because it scares me too much. And that’s not good. One drug can be used 48 hours [out] in one state, but the next place we can use it 24 hours [out]. And some places we can’t use it for a week.

“Acepromazine [a tranquilizer] is a good drug for a horse after they have had a few days off following a race, and they go back to training — it can stop them from muscle tie-up. It takes a little edge off of them for a day till they get back into their routine. But we have to be so careful with that.

“I have had a bad back since I was 18 and I will have back spasms where I can’t walk. I know how Robaxin helps my back. I used to use Robaxin on a lot of horses and now we don’t even keep it in the barn anymore.

“I feel for Graham [Motion]. I feel for these guys because I’ve been there myself, where we’ve had things happen that I’ve no idea how they happened. You have to remember, too, we use veterinarians, and they have a 100 drugs in the back of their [truck]. What if the veterinarians grab the wrong drug?

“The way our legal system is set up is that you’re innocent until proven guilty. But a trainer? He is guilty. I sit there and I know I have done nothing wrong, but I worry because you never know. Over 35 years training, I’ve had a couple positives over therapeutic deals that were out of the blue. In your mind, you’re always worried, like, ‘Oh dear, God.’”

At the 2012 Breeders’ Cup, when Lasix was not permitted in the 2-year-old races your filly, Spring in the Air, bled significantly. What were the ramifications of that event for the filly going forward in her career?

“I don’t know if she ran as well [after the incident], but I sure wouldn’t blame it on that. When we ran on her Lasix after that she didn’t bleed again. But were there any long-term problems? I wouldn’t want to say that.”

Why is it that other racing jurisdictions in the world manage to conduct racing without race-day Lasix?

“I don’t want to open up a worldwide can of worms. [But] I’m sure they have other ways of managing things. It’s funny for years, we’ve been hearing nothing has been going on [illegally] in Australia, but meanwhile if there is a competition, and someone thinks they can get an edge, doesn’t matter if they’re in North America, South America, there are men and women out there who are going to take an edge.

“To sit there and believe we are the only country that has issues [with illegal medication use] is a joke. It’s a joke. Read the stuff that is coming out of Australia with the [use of] Cobalt in horses. Please.”

What do you think about the Barr-Tonko bill calling for a national agency to regulate medication use in horse racing?

“I would be good with that if they [involved] some knowledgeable people that have actually trained horses and know the difference between good and bad. Unfortunately, the way it is now, it’s the people with the biggest pens and biggest mouths who are coming up with ideas and they really don’t how it works.

“I would like to play under one set of rules because everywhere we [race] is a different story. I would just like the rules made up by people who know what they are doing. That would be a dream come true.

“But if that bill [leads] to taking away Lasix, that would be dangerous. If they eliminate Lasix there will be more cheating going on by far. There will be people out there doing everything to stop horses from bleeding.”

Do you think medication use in the U.S. has weakened our breed?

What example would you use to illustrate that?

“Thirty-five years of training horses has provided me with a lot of experience.”