On Dec. 1, Australian racing woke up to a new system of rating its racetracks. Trent Masenhelder explains the new classifications, and how the Australian Racing Board has used them to bring the sport to a newer, younger generation of racing fans.

In January 2014, senior officials from Racing Victoria and Racing NSW conducted a wide-ranging review of the track-ratings system in Australia to determine its effectiveness. At that stage, Australian tracks were rated as “fast”, “dead,” “good,” “slow,” or “heavy,” with a 1-10 numerical system that described the condition of the turf. The ratings system operated as follows: 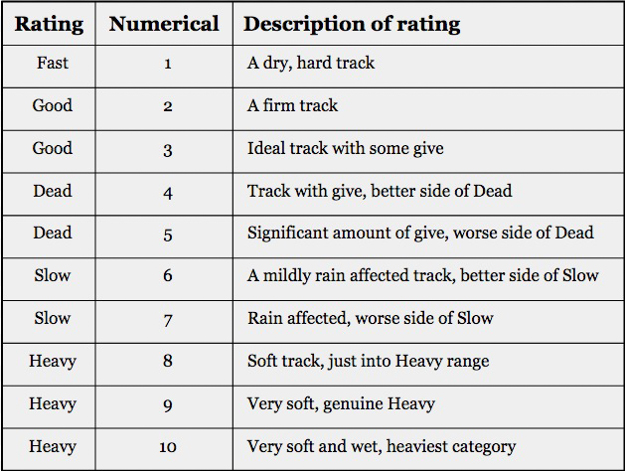 But there had been a lingering belief in Australia that this system was too complicated, especially when compared with that of other racing jurisdictions. In the U.S., the turf-rating system is much more concise, with tracks rated “firm,” “good,” “yielding,” or “soft,” without any numerical additions.

In Great Britain, the system is different again. Clerks of the course use a “going stick” to give an objective numerical reading that will reflect the state of the surface. Courses are rated “heavy,” “soft,” “good to firm,” “good,” “firm,” or “hard.” When an official going-description falls between two ratings [e.g. “good, good to firm in places”], the first and therefore predominant ground description [in this case “good”] is used for statistical purposes.

Australian administrators asked themselves if change was necessary.

The January review sought input from the industry, including the race-going public. Peter McGauran, CEO of the Australian Racing Board (ARB), said: “Track ratings can be a complex and contentious issue at times, and we need to update and streamline the current system whilst not losing its best features.” In April 2014, the ARB announced that a new Australia-wide track-rating system would be rolled out on Dec. 1. It was intended that the new classifications would make the language of track ratings easier to understand for the average racing enthusiast.

There was unanimous support for retaining the numerical scale of 1-10 in the new system, so the ARB revised the terms used to describe the going. “Fast,” “dead,” and “slow” were replaced with “firm” and “soft,” while “good” and “heavy” were retained. The new ratings system operates as follows: 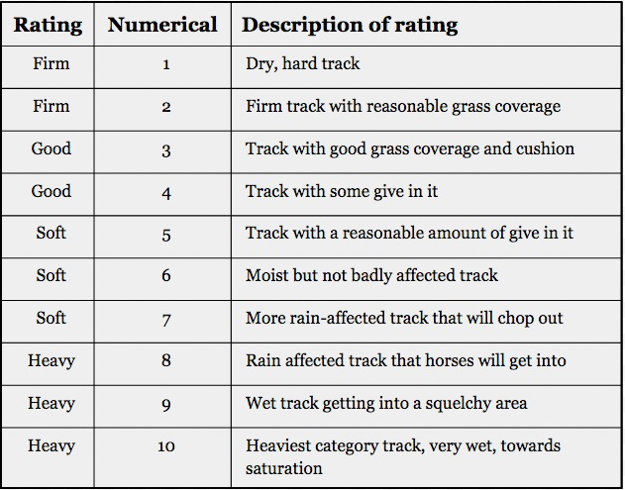 McGauran said that a positive, clear, and modern system was required for both industry participants and punters, and he believed the amendments were pronounced.

“Some of the language that was used in the old ratings was negative [e.g. ‘dead’ and ‘slow’],” McGauran explained. “There were other words that were a bit old fashioned, such as ‘fast,’ which has been replaced with ‘firm.’ These changes are significant, if only because we have undertaken a root-and-branch review of the scale and involved all stakeholders and punters. I’m glad to say we have a better system as a result. It’s a more contemporary and accurate description of the state of a track.”

While trainers and jockeys will take only a short time to adjust to the new classifications, one of the major considerations in changing the ratings system was how it would affect the betting industry. Australia has co-mingling pools with a variety of countries around the world, and betting agencies are keen for track-rating consistency to attract punters, both local and foreign.

“The new ratings are more aligned with international ratings, because ‘dead’ and ‘slow’ aren’t used anywhere else in the world,” McGauran said. “For instance, ‘firm’ is a more understood term internationally, but there was also a limit to how much we could replicate international ratings. We carefully examined overseas ratings and adapted them where practicable in the Australian environment.”

Melbourne-based Daniel O’Sullivan is a professional punter, and believes the changes won’t have a profound influence on how he assesses form. He said the new system is a positive step forward for the Australian industry.

“We’re keeping the 10-point system, so it’s really just a change in labels,” he said. “The average punter might not have really understood what ‘dead’ meant before, but now that it’s going to be called “soft,” it’s more understandable, and so better for the industry. As regards analyzing form, it will all depend on how the suppliers of the form-data present it. At the moment, there are a lot of form guides that will still show ‘dead,’ and punters aren’t going to know whether that, in today’s new terms, was a ‘good 4’ or a ‘soft 5.’”

On Dec. 1, the new ratings were carried across all racing media, and many general media outlets, explaining the new system and consigning what was described as “old racecourse terminologies” to the past. In particular, the ARB was out to embrace the newer generation of racing fans.

“The younger demographic believes the language to be more relevant and easily understood,” McGauran said. “Whilst there’s never going to be unanimity of view, I do believe there is as great a consensus as you are ever going to get.”